Second, I put out this short tweet yesterday together with a video of the Prime Minister, and it went viral. In a mere 180 minutes, it was seen by 67,400 people and was still swishing around the globe as I wrote this. After 8 hours, 165,000+! 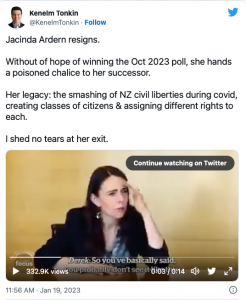 Jacinda Ardern set a couple of records. She was the youngest female prime minister ever in 2017. Further, she gave birth whilst in office.

Of course, neither of these has anything to do with political achievement.

To be fair, we can probably agree that Jacinda Ardern is expressive.

Some went so far as to say she showed great empathy.

I think it more accurate to say any apparent empathy was self-consciously dispensed and exclusively to beneficiaries of her bias.

Any praise for expressiveness and empathy needs much closer scrutiny. It’s what she expresses that so confounds civil libertarians like you and me. And, if you don’t mind me expressing myself here dear reader, she showed a distinct lack of empathy for many during covid lockdowns, victims of which are generations not yet born as you’ll see. So read on.

Instead, what we observed was a smiling socialist, a Daughter of Davos, instinct over intellect, all feeling and no financial finesse. In short, she was a classical liberal’s nightmare.

Just look at the legacy she leaves after six reckless years in office: