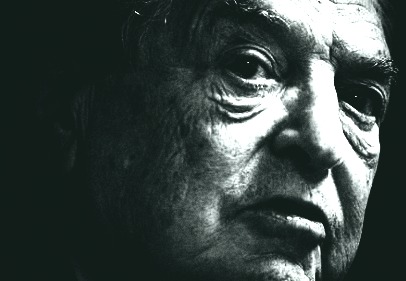 Global hedge fund tycoon and political provocateur George Soros is leading a war of symbols, namely flags and banners either resurrected or conjured up by his myriad non-profit groups, to stir religious, racial, and ethnic tensions the world over. From the Serbian OTPOR! movement and its clenched-fist symbol adopted by protests groups around the world to the menacing black and white flag of the Islamic State, which first appeared during the Soros-backed «Arab Spring» rebellions, Soros’s «false flag» factories have been running at break-neck production speeds.

Soros and his acolytes saw the importance of symbology in the writings of Gene Sharp of the Albert Einstein Institution in Boston, Massachusetts. Although Sharp’s catechism of how to conduct non-violent resistance and revolution has been likened by some political scientists to Mohandas Gandhi and Dr. Martin Luther King, his concepts on upsetting the political status quo appear to be borrowed more from the likes of Mao Zedong, Karl Marx, and Adolf Hitler.

Among Sharp’s necessary tools to conduct political action are «flags and symbolic colors», «slogans, caricatures, and symbols», and «banners, posters, and displayed communications». The «symbolic colors» have been used by Soros- and Central Intelligence Agency-sponsored «color revolutions» in Ukraine (Orange) and Kyrgyzstan (Pink) and attempted color revolutions in Iran (Green), Kuwait (Blue), and Burma (Saffron).

Using the Sharp template and financing from Soros and the CIA-linked National Endowment for Democracy (NED), Symbols were used in the themed Arab Spring revolutions in Tunisia (Jasmine) and Egypt (Lotus) and attempted revolutions in Georgia (Rose), Lebanon (Cedar), Uzbekistan (Cotton), and Moldova (Grape).

It is now more than obvious that Soros and his minions, known as «Sorosites» – a clever play on «parasites» – in the Balkans, contracted with flag factories to churn out banners of former regimes in the uprisings in Libya and Syria. In Libya, the rebels who rose up against Libyan leader Muammar Qaddafi in 2011 brandished factory-fresh, still-creased red-black-green horizontal tricolor with the white crescent and star used by the old Libyan monarchy, the regime that Qaddafi overthrew in 1969.

Almost simultaneously, Syrian rebels opposed to President Bashar al-Assad hit the streets of major Syrian cities with factory-fresh green-white-black horizontal tricolors with three red stars used by Syria during the French League of Nations mandate and by the Republic of Syria in 1961. It was obvious that in both cases, the Soros- and NED-sponsored opposition groups in Libya and Syria foresaw a return to a pro-Western Libya as had existed under the feudalistic King Idris until his overthrow in 1969 and a Syria not unlike the pro-Western regime of Major-General Abd al-Karim Zahr as-Din, a Druze who ousted the pro-Gamal Abdel Nasser regime in Damascus in 1961. However, for Soros and the regime change advocates under U.S. Secretary of State Hillary Clinton, there would be disappointment.

Instead of pro-Western regimes taking power in Libya and Syria, major swaths of territory fell to jihadist forces who mainly owed allegiance to the Islamic State but with a few swearing loyalty to Al Qaeda. Regardless of what jihadist entity they supported, these rebel groups received support from Saudi Arabia, the Turkish Islamist government of Recep Tayyip Erdogan, and the Gulf emirates of Qatar, Abu Dhabi, Dubai, Sharjah, and Kuwait.

Instead of the flags of the former pro-Western proxy regimes appearing over buildings in Libya and Syria, factory-fresh black and white flags of the Islamic State of Iraq and the Levant (ISIL) flew from flagpoles, windows, and balconies from Benghazi and Sirte to Tripoli and Derna. In Syria, new ISIL flags were raised from Raqqa and Majib to Idlib and Palmyra. To the east, in Iraq, ISIL flags replaced those of the U.S.-installed Iraqi government and the Kurdistan Regional Government.

One indication as to the source of the new ISIL flags was reported on October 7, 2014 by the Jewish Telegraph Agency from the northern Israeli town of Nazareth Illit. Gardeners in the factory area of the city discovered a bag that had fallen onto a street from a truck. Twenty-five new black and white ISIL flags were found inside the bag.

A number of questions were raised by the discovery. Were the flags manufactured by a factory in the Jewish city? It is known that the Israeli military provided logistical and other support to jihadists fighting across the Golan Heights border in Syria. Were ISIL flags part of Israeli propaganda support to the jihadist rebels? Additionally, did Soros and the NED outsource the production of ISIL, as well as the flags of former Arab regimes, to the Israelis for distribution in Libya and Syria?

Soros’s connections to ISIL became very apparent during the opening session of the United Nations General Assembly when some human rights advocates, including some linked to Soros’s nongovernmental organizations, called for the International Criminal Court (ICC) to prosecute the leadership of ISIL. The ICC, which is heavily influenced by Soros organizations, balked at the idea of prosecuting ISIL officials and operatives.

The ICC claimed that since neither Syria nor Iraq were parties to the 1998 Rome Statute, which created the court, ISIL commanders and ground troops could not be hauled before the international tribunal to answer for their crimes against humanity in those countries. The ICC has had no problem prosecuting leaders and military officers from the Balkans and Africa, but ISIL was deemed off-limits.

The ICC was also prepared to put members of the Qaddafi family on trial for alleged crimes in Libya, however, ISIL and its affiliates in Libya were of no interest to the court. The main reason for the ICC to look askance at ISIL is because in any trial of the group’s leadership, the «false flag» antics of the Saudis, Israelis, Turks, Emiratis, the Soros organizations, and the Americans might have been laid bare for all the world to see.

Soros’s false flag antics are not merely confined to the Middle East. The eruption of violence among African-Americans in response to police violence targeting mainly African-American men saw new flags bearing the slogan «Black Lives Matter» being raised in cities and towns across the United States. It is well-known that Soros finances the Black Lives Matter group and the flags appeared to be yet another use of banners, slogans, and symbols in keeping with the template of Sharp and his themed revolution model.

While «Black Lives Matter» flags appeared throughout America, historical flags like the 13-star «Betsy Ross» flag from the American Revolution; the Gadsden Flag bearing the motto «Don’t Tread on Me», a slogan popularized by Benjamin Franklin; and any flag bearing any symbols from the Confederate States of America were denounced by Soros-funded pressure groups as «racist». There were demands that these historical American flags be banned from cemeteries, parks, historical battlefield sites, and other locations. This was yet another «false flag» attack by Soros and those who actually wish to alter American history and impose a regime of extreme political correctness in violation of the free speech clause of the U.S. Constitution.

As a result of Sharp’s roadmap to revolution, flags and symbols are potent weapons. Police in Spain have found ISIL flags in towns located in southern Spain, the location of the old Al Andalus Caliphate that the Islamic State has vowed to «liberate» from Christianity. Turkish flags are found in greater numbers in some German neighborhoods than German flags. Hispanic groups protesting Republican presidential candidate Donald Trump wave factory-fresh Mexican flags. The telltale signs of George Soros and CIA destabilization efforts can be found in the flags that appear in crowds of protesters. Vexillology intelligence (Vexint), or flag intelligence, should become a branch of every major intelligence agency around the world.

Strategic Culture Foundation provides a platform for exclusive analysis, research and policy comment on Eurasian and global affairs. We are covering political, economic, social and security issues worldwide. Since 2005 our journal has published thousands of analytical briefs and commentaries with the unique perspective of independent contributors. SCF works to broaden and diversify expert discussion by focusing on hidden aspects of international politics and unconventional thinking. Benefiting from the expanding power of the Internet, we work to spread reliable information, critical thought and progressive ideas.