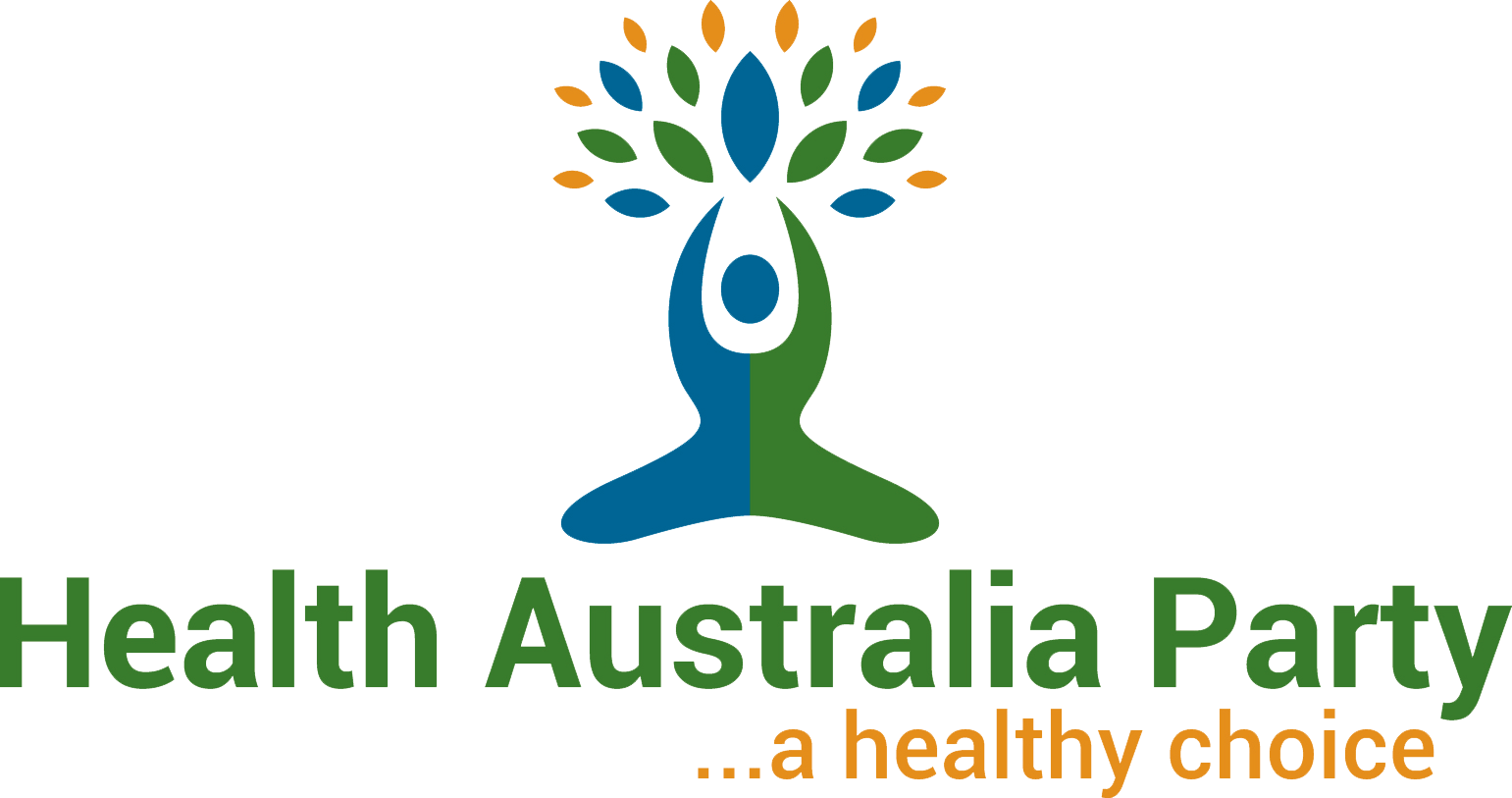 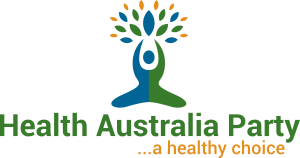 ***So finally a good news story about the quiet birth of the first Australian Federal political party ever to include health in its name, the Health Australia Party.

I so tire of reading endless corruption stories daily by our major corporations treating us like scum, particularly Big Pharma, which sees us as mindless CONSUMERS, rather than patients who just want to become healthy contributing citizens.

I must declare upfront a conflict of interest – I was so impressed with the five policy pillars of the Health Australia Party, I paid the $20 to become an inaugural member earlier this year. I have also set out to test the bona fides and morals of the  brave new political combatants, seeking to win Senate positions in most key States (note there are still candidate spots available and potential for House of Representative candidates to nominate as well).

In previous Federal elections, I have generally voted for the Liberal Party as a supporter of free enterprise, but on occasion have backed the Labour Party’s preferred vision at the time, and many times also supported the Australian Democrats or the Greens in the Senate.

In my business career, I have been supported at the highest levels by senior figures in both the Liberal Party and the Labour Party, plus had a joint venture fund management business with the cream of the Labour Party’s industry superannuation fund architects.

So why at the launch today of this extraordinary eight week Federal election campaign do I raise a new political party such as the Health Australia Party for consideration?

Well, because I am beyond disillusionment with the extent the free enterprise/capitalist system has been overridden by the global corporate elite’s masterminded global strategy of suppression and harm of the world’s population.

The elite Rothschild, Rockefeller et al clans have systematically carved an extraordinary atmosphere of fear in the minds of most world leaders and their political teams, to the extent our politicians are like putty, so brainwashed or devoid of courage or plain corrupted, incapable of withstanding the elite’s satanic abuse of our lives, our dreams and our health.

Interestingly my main business career came to an end at the pen of Rothschild back in the late 1990’s ( led by young turk Mr Mike Symons – read on).  Rothschild’s merchant banking arm then took over the fund management business which my business partner and I ran in joint venture with the trade union controlled industry superannuation funds. The Rothschild guillotine came down in record time to highly publicly destroy that JV, namely one year into a fixed five year deal.

For those of you who then came to know me in my subsequent ten year involvement with the horse racing and breeding industry, the current Melbourne Racing Club Chairman is the same Mr Mike Symons of Rothschild’s fame.

Mike Symons has just failed in his corrupt attempt to run an election campaign with only his mates in the know, in order to entrench himself and two other board members at the helm of the Melbourne Racing Club for a 12 year reign. A re-election has now been sought after a widespread OUTCRY – let’s hope the members give Mike and his cronies what he justly deserves. See Melbourne Racing Club declares controversial vote null and void

So can the Health Australia Party (HAP) deliver HAPpy days for those of us concerned for our own health and the health of our families and their future generations of drugged defenceless babies? I certainly hope so.

Big Pharma has created a cradle to grave onslaught of extraordinary drug cocktails exploding exponentially each decade, without any scientific trials as to their impact in such extreme combinations, and a neat cop-out for doctors unable to determine which adverse event related to which drug  administered.

Clearly it is early days for HAP but those in the team I have met are at the forefront of their professions and show extreme courage at standing up to the elite and saying “enough is enough”. The HAP office bearers will no doubt be immediately targeted by our biased regulators, driven by what I say is an elaborate criminal conspiracy to distort our health system to ensure prevention is a dirty word and Big Pharma is omnipotent.

My recent unheeded warnings about the state based health complaints legislation, culminating with the passing of the most discriminatory Victorian Health Complaints Bill, now sadly heralds an effective abolition of the legal right to practice all natural medicine professions.

The mandatory code of conduct standards, including requiring treatments to be “scientifically” substantiated, a test totally not required of our medical doctors, ensure any natural health profession or individual  practitioner singled out will have no hope of defending any state based prohibition proceedings. Hearings will be before a biased state based Complaints Commissioner, appointed by mainstream medical lobby groups, licking their cherry-picking chops that our naive politicians just abolished natural medicine without most even realising it.

Of course one politician bought off by Big Pharma did realise she abolished natural medicine, namely Victorian Health Minister Jill “all vaccines are safe” Hennessy, a lawyer by trade, who appointed an ex cop as head of staff, Kathy Ettershank and who ignored all my numerous correspondence and specific questions.

If you think I am over dramatising the scenario, bear in mind I assisted through most of the 66 days in the longest Victorian health practitioner case in 2013 before a criminally corrupt VCAT hearing headed by Senior Member Robert Davis.

The VCAT Tribunal overlooked the entire evidence of all six medical doctors, who were experts in the same field as the registered health practitioner. This evidence related to treatment of a single patient who had only complained he couldn’t pay the bill.

This corrupt Tribunal deregistered the practitioner by cherry picking evidence from various non expert witnesses, including the actual practitioner who was the first attack subject leading to the formation of the Friends of Science in Medicine, the ultimate source of cherry picking science. Work that one out – plus the deregistered practitioner had 906 peer reviewed journal articles on his website – not good enough science AHPRA said. At least AHPRA were embarrassed enough later to withdraw this case from its website list of relevant cases to guide other registered practitioners. Fortunately we defended the prohibition order sought by AHPRA so the brilliant health practitioner still practises, plus significantly, he was found to be of good character, a priceless asset worth fighting to the extremely bitter and disillusioning end.

This politically motivated review is an absolute demolition derby of all of the main 17 natural professions by our INCREDIBLY CORRUPT National Health and Medical Research Council. Wait until you see how the NHMRC dealt with the other most contentiousness health debate of the day – mind blowing in its pseudo science approach and clear evidence of a raging criminal conspiracy in my opinion. Corruption to the Core I say. Working on a post to explain ASAP.

Maybe one quote from this 179 page NHMRC guillotine will be enough for natural practitioners, and their patients, to look for alternative leaders of their representative associations and better political options to consider voting for in the Senate, like the Health Australia Party. Check out the NHMRC’s main conclusion:

“Overall, there was not reliable, high-quality evidence available to allow assessment of the clinical effectiveness of any of the natural therapies for any health conditions.”

I promise my next 8 weeks pre-election will mainly focus upon dismantling the NHMRC’s charade of an ethical government regulatory agency plus finding time to put a blow torch to that satanic puppet of Big Pharma, the Friends of Science in Medicine, the elite of science cherry pickers.

I did perform the role of Principal Legal Officer of the National Companies and Securities Commission in the 80’s – what a farce that regulatory body became with cronyism beyond my wildest naive imagination at the ripe old age of 26. The NHMRC is something else to behold so all of you NHMRC cronies enjoying your complacent unaccountable gravy train of corruption – be warned – your game is about to be challenged and I expect the usual intimidating fight with your mates at Friends of Science in Medicine screaming their lungs and vitriol too at any one who dares to question.