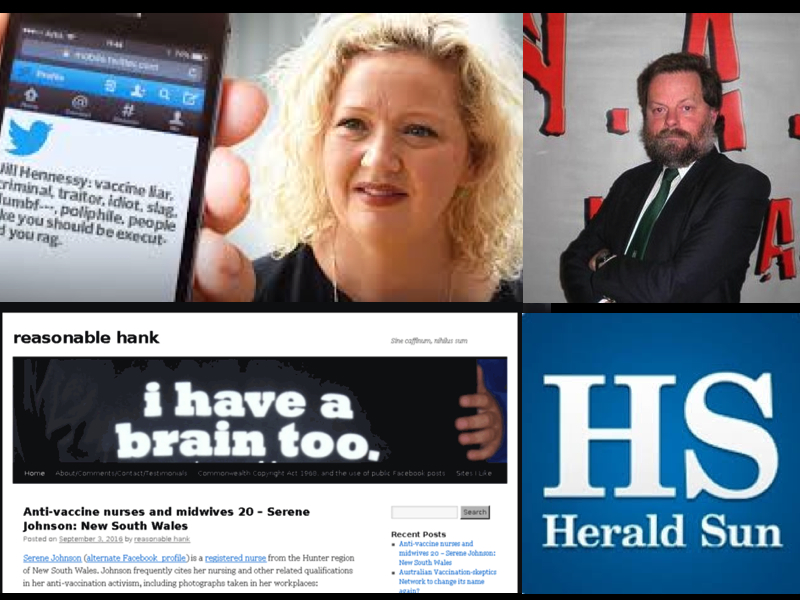 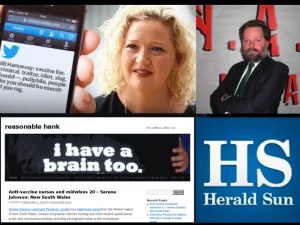 Health Minister Hennessy Incites Hate Again – Did she go too far this time and attempt a cover up?

On the morning of 29 October 2016 Bruce Thompson posted the status update seen below, on Facebook. Bruce explains that he and his wife have had a rocky 8 years trying to help their son into a normal routine. Bruce and his wife spent countless

hours and vast amounts of money on finding treatments for their severely autistic son. They were so successful that they have since helped many more people around the world who have children with autism.

Bruce explains in his update how his name has somehow ended up on a website which lists so called rabid anti-vaxxers. The site states that these people should be “called out as child neglectors or inciting said child neglect (primarily the latter)”.

How is it that Bruce can be named a child neglector and being accused of inciting child neglect?Wow, Bruce has never in his life told anyone on social media not to vaccinate. He merely speaks of freedom of choice, when it comes to vaccines. Bruce and his wife have achieved a miraculous outcome for their son and their family has sacrificed much over the years to do so. They did all this for their son’s future and deserve nothing but respect and admiration for their success.

Philip Gluyas took credit for this disgusting hate inciting blog in this tweet. Philip is a wannabe politician from the Ballarat region. Philip has autism and/or Asperger syndrome and I have to admit does very well managing his condition. However he believes that autism is a genetic disorder and he will fight anyone that might have another view. Phil attacks and incites hate against parents that ask questions about vaccines and an autism link. Phil is very passionate about this being untrue and will ridicule anyone that has a different opinion from his. Phil has autism but this doesn’t give him a free ride to abuse anyone that doesn’t agree with his views. We are still living in a free country.

Philip Gluyas was raving about Jill Hennessy coming out with her abusive “tweets” story on his blog post from 21 October 2016. In this post he mentioned the comment which mentioned Zionism. Funny how that comment has been found to be fabricated after an extensive investigation. Read all about that in this article which shows without a doubt that Jill Hennessy fabricated and flat out lied about these “tweets”.

“It’s quite clear what she thinks of the comments on Twitter that she reads out. I loved her rejoinder after reading the one that mentioned Zionism – calling the person who wrote it likely a believer that 9/11 never happened! There are plenty of those amongst the anti vaxxers, and I would add not believing Sandy Hook happened to that. Hello, David Thrussell!”

Phil continues in this post and says some disturbing things that show just how much he hates people that question vaccine safety and effectiveness.

“There is some typical muck from some idiots here, and in the story the Herald Sun spoke to an admin of the Facebook group Anti Vaccination Australia, Belgin Colak, who stated that none of those tweets came from anyone in her group. How does she know that? Anti vaxxers are ALL like that, and I know because I’ve been attacked as well on both Twitter and Facebook.”

So Phil knows “Anti-vaxxers are ALL like that”, because he has been attacked on both Twitter and Facebook. Well that’s a great generalisation and to say the least very disturbing and hateful. This is shown even more when you see that Phil has in the past used his Twitter account to express his beliefs about generalising all Muslims. As you can see in these screenshots below. Phil really has some double standards when it comes to generalisations.

Phil ends his post by stating an absurd and absolutely ridiculous and outrageous statement.

“Any claimed vaccine injury – and they do happen and I’ve never said otherwise  –  was the result of system error or neglect. As the saying goes, a bad workman blames their tools. There has NEVER EVER been a vaccine injury caused by the vaccine by itself. Anyone who says otherwise is a liar.”

Phil states that the only way vaccines can do damage is by “system error or neglect”. Let me just state that Phil has not mentioned anywhere on any of his profiles on social media or his blogs that he holds any qualifications whatsoever. Especially not medical or scientific ones. Phil however claims to know the truth about autism. Funny when even the Australian Autism website states clearly that the causes for autism are still unclear.

Philip Gluyas is obviously very proud of his pro-vaccine stance. He tweeted about his latest update to his AV Checklist website and tagged Health Minister Jill Hennessy in the tweet. This is the same website that vilified Bruce Thompson. This is what the blog says about itself:

“This is a list of social media trolls who are rabidly anti vaccine and in my opinion should be called out as child neglectors or inciting said child neglect (primarily the latter). This list comes in four parts – the first part lists the Australians who I am listing here in preparation for a direct police report should they cross the line from expressing an opinion to bullying – or do something else that warrant .”

Phil lists a list of “social media trolls” that he wants police to act against when they “cross the line from expressing an opinion to bullying”. As you can see in the screenshots below. I think that Phil himself has crossed the line a few times in the past. Phil has definitely crossed the line when it comes to online stalking as can be seen in these screenshots and as can be concluded from his extensive “research” into obtaining the addresses of the people on his list. And as this article shows the harassment and online bullying is nothing new or out of the ordinary for the pro-vaccine movement.

As you can see below Jill Hennessy liked Phil’s tweet and by doing so proves that she condones this hateful and hate inciting blog. She must have realised later on that this might not be something she should be doing as a politician and hid her tweet from the public. But it was too late and unfortunately for her we now have proof of her knowingly inciting hate.

In this early screenshot there are 2 likes for Phil’s tweet:

In this screenshot it is clear that Jill Hennessy is one of the people liking the tweet:

In this screenshot it is clear that Jill’s avatar has disappeared:

This screenshot shows that the second person liking the tweet has asked not be shown:

Jill Hennessy was already caught out in this article spreading her hate and fabricating lies. However now we have further proof of her absolute incompetence as a Health Minister. Yet again she has shown that her real agenda does not create “healthy” people but enhances a “healthy” health industry.

Jill’s actions prove she doesn’t care about loving, caring parents like Bruce Thompson and has actually condoned the vilification of beautiful people like Bruce and his wife. Jill Hennessy, it is time you pack your bags with all your hatred and lies and leave your office. I think politicians all over Australia should be ashamed that you are allowed to call yourself a minister.

I would like to end this post by thanking Phil Gluyas for writing this list as it has brought many of us in the pro-choice movement together and has helped us extend our wonderful community.