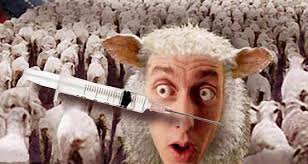 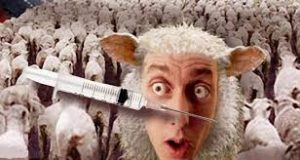 The latest attempt by the media and conventional health authorities to keep vaccination rates high is by pitting parent against parent using the concept of herd immunity.

Herd immunity is based upon the idea that 95% of the population must be vaccinated for a particular illness in order to prevent epidemics.  Some are even arguing that 100% vaccination is necessary for a protective effect.

With vaccination rates continuing to fall each and every year as more parents delay or forgo shots entirely for their children, authorities are blaming unvaccinated children for putting the population at large at risk or worse, for outbreaks themselves.

This relentless blame game being played out in the media and at doctor’s offices has caused some parents of vaccinated children to fear and look down on unvaccinated children as potential harbingers of disaster for society and even lash out in rage at parents who choose not to vaccinate.

Note the following comment posted yesterday on The Healthy Home Economist Facebook page by one such parent who views unvaccinated children as almost in the same league as rabid dogs:

“If you do not vaccinate, please home school. I do not want your child to make a pregnant woman lose her pregnancy , or kill an immunocompromised child. Your freedom ends at the tip of my nose. Vaccines work on a POPULATION basis, not an individual basis. Its a public health issue, not an individual health issue. You can drink til your liver is pickled, but stay off the roads we drive. What if polio and smallpox were still around, would you risk your child? People really do die from these diseases, the writers’ above have not seen their children get these childhood illnesses because the majority of our kids have been vaccinated, not because they are lucky or because their parents choose better food.”

Most alarming about an irrational comment like this is that it is based on completely wrong information – a myth which is being perpetrated and perpetuated for the sole (financial) benefit of the pharmaceutical industry.

What better way to keep Mr. and Mrs. Jones vaccinating Junior than through good old fashioned peer pressure?  The fear that their next door neighbor won’t let Johnny come over and play because Junior isn’t vaxed is a very powerful influence of behavior is it not?

The original definition of herd immunity applied to the protective effect that occurred when a population contracted and recovered naturally from infections.  Natural immunity lasts a lifetime whereas vaccine induced immunity does not.

Short term and highly inferior vaccine induced immunity in a highly vaccinated population cannot in any way be compared with natural immunity acquired by the same group of people.

The herd immunity myth as it is applied to vaccine induced immunity took hold decades ago when vaccination proponents argued that vaccines provided lifelong immunity in the same way as natural immunity.

When this was shown not to be true, booster shots were introduced to keep vaccine immunity from “wearing off”.

To the dismay of vaccination authorities, outbreaks still occur in groups of children who have been fully vaccinated and receiving booster shots.  Hence, the convenient blame game and finger pointing that is now occurring with unvaccinated children said to be the “cause” of such outbreaks.

Dr. Russell Blaylock MD, a retired neurosurgeon, says that if one takes a moment to consider the history of vaccination, the concept of herd immunity as it applies to vaccines unravels quickly.

“When I was in medical school, we were taught that all of the childhood vaccines lasted a lifetime. This thinking existed for over 70 years. It was not until relatively recently that it was discovered that most of these vaccines lost their effectiveness 2 to 10 years after being given. What this means is that at least half the population, that is the baby boomers, have had no vaccine-induced immunity against any of these diseases for which they had been vaccinated very early in life. In essence, at least 50% or more of the population was unprotected for decades.

If we listen to present-day wisdom, we are all at risk of resurgent massive epidemics should the vaccination rate fall below 95%. Yet, we have all lived for at least 30 to 40 years with 50% or less of the population having vaccine protection. That is, herd immunity has not existed in this country for many decades and no resurgent epidemics have occurred.

Vaccine-induced herd immunity is a lie used to frighten doctors, public-health officials, other medical personnel, and the public into accepting vaccinations.”

If you are a parent who chooses to vaccinate, note that the concept of herd immunity as it is erroneously applied to vaccines is being used to manipulate you into using scorn and fear to pressure family and friends within your circle of influence into accepting vaccination against their will.

Is this really the kind of flawed, divisive and highly misguided public health initiative you want to be a part of?