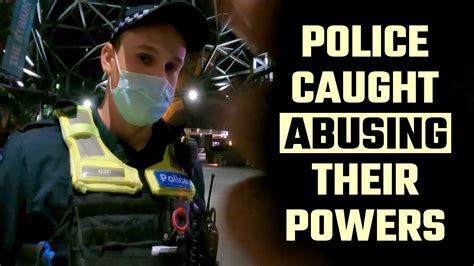 For months I’ve been telling you that Victoria Police were manipulating our judicial system to quash dissent.

I’ve repeatedly explained how they take summary offences, like breaching a Covid restriction, which only carries a maximum fine penalty, and turn them into jailable crimes by bailing the people they want to silence.

Some took my word for it, but others called me fake news because I lacked the evidence.

This explosive unintentionally recorded footage proves everything I’ve been saying.

Watch these foolish covid-cops incriminate themselves, and then share this video for everyone to see what’s really going on.

On the 11th of August, police confronted Marty Focker for allegedly being further than 5km from his home.

Mr Focker was in the city filming the protest activity to upload online.

Once arrested and police thought the cameras were off, the officers begin conspiring to “trump-up charges” against Mr Focker.

“It’s just bullshit anyways and will get thrown out”, one covid-cop could be heard saying.

The officer explains how if they just issue a fine for the summary offence, he’ll just be able to come back. However, they can apply bail conditions if they lay trumped-up charges against Mr Focker and his friend.

Marty Focker is now on bail. Meaning, if he’s caught without a mask, outside his 5km, not using a QR code or any of the other CHO directives that change day by day, he won’t just get a fine. They’ll lock him up for breach of bail.

That was the conspiracy cooked up by covid-cops and caught on camera.