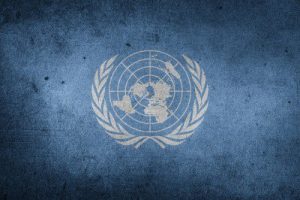 Articles 1 of the UN Charter of 1945 gives the purpose & principles of the UN – maintain international peace & security, take effective collective measures to prevent & remove threats to peace, suppress acts of aggression or other breaches of peace, bring about by peaceful means in conformity with principles of justice and international law, adjustment or settlement of international disputes or situations which may lead to breach of peace. UN bound to develop friendly relations among nations, strengthen universal peace, achieve international cooperation in solving international problems of economic, social, cultural or humanitarian, promote respect for human rights and fundamental freedoms without distinction of race, sex, language or religion & be the centre for harmonizing the actions of nations to attain these common ends.

Article 2 declares that the UN is based on the principle of sovereign equality to all Members, that all Members shall settle international disputes by peaceful means so that international peace is not endangered. All Members shall refrain from threat or use of force against territorial integrity or political independence of any state. The most important of which is ‘Nothing contained in the Charter shall authorize the United Nations to intervene in matters which are essentially with the domestic jurisdiction of any state’.

Now ask yourself has the UN abided by the clauses of the UN charter and have the US, UK & NATO nations honoured these clauses.

The answer is a sad NO.

Since 1945 the UN has ignored all of West’s state sponsored terrorism while allowing the West to charge other nations and even endorsed sanctions leading to further deaths and suffering.

What is the use of a UN that ignores the bulk of crimes that exist in the world because of West’s incursions resulting in the exodus of internally displaced people, refugees, asylum seekers and a host of issues which invariably open up opportunities for West’s mercenaries and missionaries in the form of NGOs and corporations to enter the very nations they have destroyed claiming to offer solutions.  This hypocritical nature of world domination needs to stop. As we can all see it is fairly evident that the Islamic jihadists themselves are well trained mercenaries tasked to do an objective and using Islam in lieu of the ‘Communist’ tag the West used to destroy nations of Asia including the USSR. A West that boasts equality, transparency and justice has been ousting every leftist thinking political leader branding them as ‘communist’ ‘dictator’ while totally ignoring the state terrorism inflicted by them.

The following list is taken from an article by James Lucas “US has killed more than 20million people in 37 victim nations since World War 2” should give readers a fair idea of what the UN has been ignoring and what the West has been committing and this should suffice to say it is time for UNexit and time for UN to wind up for it has failed the rest of the World by becoming an appeasing puppet to Western neo-colonial politics.

Since 1945 while the UN was tasked to overlook world peace – the US and fellow Western nations have been responsible for – covert operations, using depleted uranium, napalm, intervening in elections, overthrowing democratically elected leaders & replacing them with puppets, arm twisting Third World leaders to sell national assets to Western corporates, arming, financing and training terrorists, funding terrorist groups,  funding propaganda lies, using mercenaries, enlisting NGOs to do dirty work, creating schools to train in methods of torture, firing at civilian flights, killing civilians from drones and excusing as collateral damage, targeting civilian infrastructure, ruining ancient historical sites (cultural genocide), bogus military interventions on pretext of humanitarian causes – what is even more horrifying is that the US declassified documents boasting of its escapes and CIA and Western intelligence even admits openly to these involvement but no criminal proceedings are taken against the West by the UN. Is the UN the West’s puppet court? And to add to the hypocrisy 8 months after coming into power the US President Obama is awarded a Nobel Peace Prize…. Do we laugh or cry?

Are we to continue with the UN so that the West can now turn its bloody hands on Asia having ruined Latin America, Africa, parts of Eastern Europe & presently the Middle East? Should this Western puppet of racism with welcome hands only for western-worshipping Asian/African sepoys be allowed to do to Asia what they have done to the rest of the world? Let us not forget that we are already carrying the burdens of close to 500 years of colonial legacy do we want to walk into a neo-colonial one too?