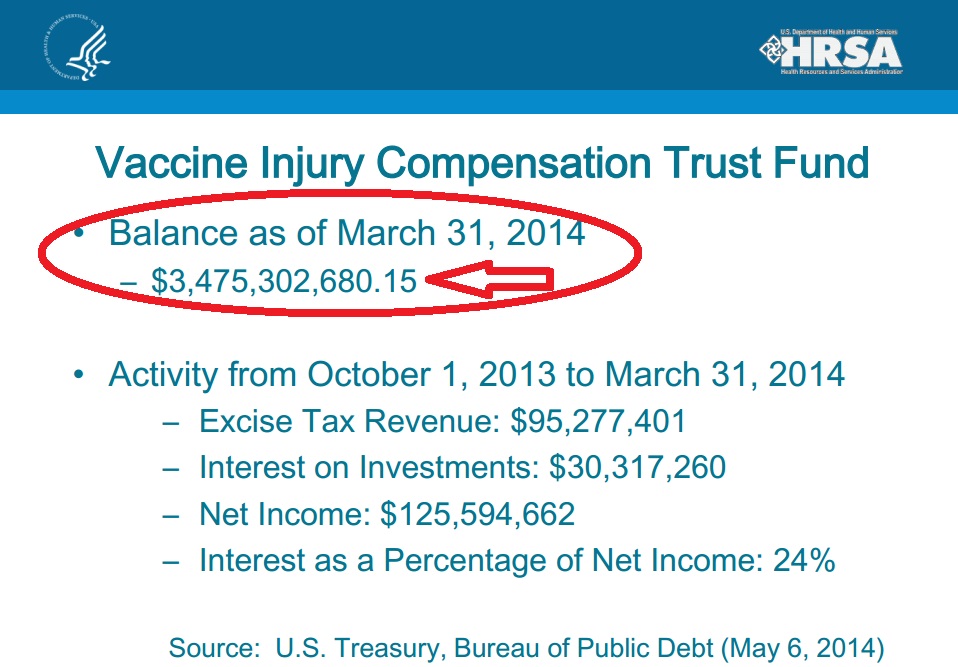 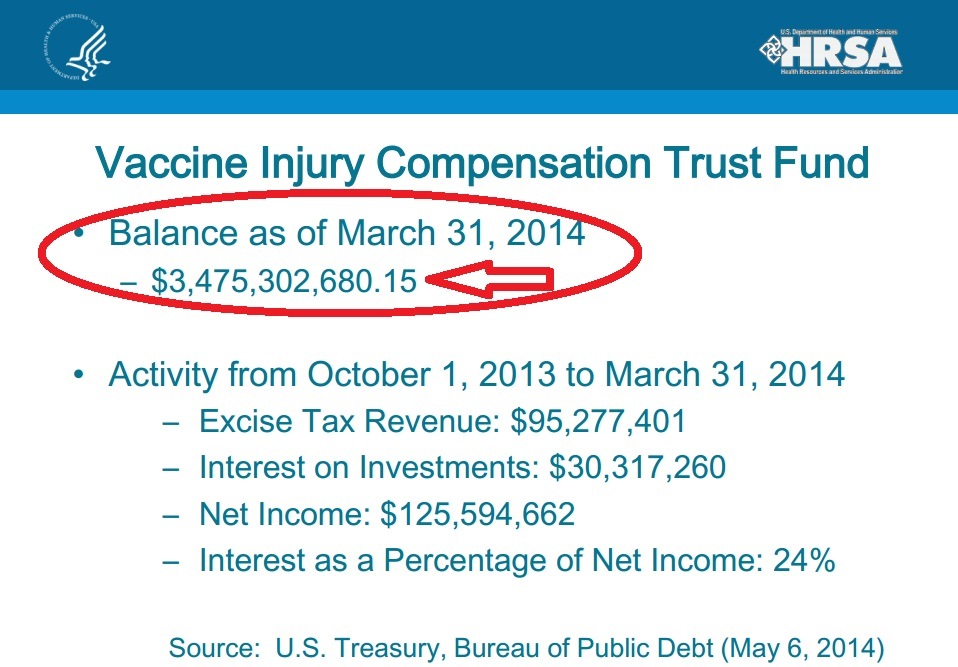 Few among the American public truly understand just how huge the U.S. vaccine market is. Not only do drug companies reap huge profits from vaccines, so too does the U.S. government.

For example, did you know that the U.S. Department of Health and Human Services has accumulated $3.5 BILLION in vaccine tax revenue which is currently “sitting” in the Vaccine Injury Compensation Trust Fund?

This trust fund was established in 1988 “to compensate vaccine-related injury or death claims for covered vaccines.” The money in this fund comes from a $0.75 excise tax on vaccines recommended by the CDC.

In other words, you the taxpayer fund it – not the drug companies.

The problem is that the government hires the best attorneys available (with your tax dollars) to litigate against families with vaccine damaged children (dead or alive) who are trying to collect from this fund. Those who are successful could spend up to 10 years trying to prove their case in a special court designated for vaccine injury compensation. So the result is that there has always been a surplus in the Vaccine Injury Compensation Trust Fund, and it has now grown to $3.5 BILLION this year.

In 1986 the National Vaccine Injury Compensation Program was established by Congress because the drug manufacturers threatened to stop manufacturing vaccines if they were not granted legal immunity from damages due to vaccines. It was no longer profitable for them to continue manufacturing vaccines in a free market, because of the large amount of lawsuits for injuries and deaths due to vaccines. So instead of requiring the drug companies to produce safer vaccines, Congress granted them total immunity from civil litigation due to injuries or deaths resulting from vaccines.

Today, one cannot sue drug companies for damages or deaths due to vaccines. You have to sue the Federal Government and try to get some of the funds “set aside” from this Vaccine Injury Compensation Trust Fund that your tax dollars paid for to begin with.

The General Accounting Office (GAO) issued a report in 2000 covering the first 11 years of the Vaccine Injury Compensation Program. They reported that from the program’s inception in fiscal year 1988 through fiscal year 1999, the program’s trust fund paid nearly $350 million in compensation for vaccine injuries and attorney fees, as well as related administrative costs, but had a balance of $1.46 BILLION.

The report raised the question as to whether the fund was growing too big: “This balance has raised questions such as whether the current excise tax rate exceeds the level necessary to meet the fund’s stated purpose.” Today, the balance has more than doubled to $3.5 BILLION.

The GAO was to issue a new report on the Vaccine Injury Compensation Trust Fund in August of this year (2014), but Health Impact News has not been able to get a response from the GAO office yet on when exactly that report will be issued. We will report back here when we find out.

UPDATE: Here is the GAO response. Looks like they don’t want to issue the report prior to the elections in November:

The work is still underway and we don’t expect to issue it until late November or December. We don’t issue any information about what we are finding until we complete the work.

One reason why the Vaccine Injury Compensation Trust Fund has probably grown so large is probably because “autism” has been taken off the list of vaccine injuries that can be compensated for from this fund.

By March 1, 2010, 13,330 cases had been filed in the special vaccine court, with 5,617 representing autism cases. Of those 13,330 cases filed up to March 1, 2010, only 2,409 were compensated. The rest were dismissed, but there were 5,933 cases still pending, and most of those were claims for vaccine-induced autism, mostly due to either the MMR vaccine, or vaccines containing thimerosal (mercury).

How did this special vaccine court deal with these thousands of cases of autism that were filed as injuries caused by vaccines?

Simple. They took 3 “test cases” that they said represented all of them, and litigated against those claims. Their own appointed judges then ruled in each case that vaccines were not the cause of their autism. Then they told everyone else that their autism could not have been caused by vaccines, and that they would pay no damages for all those thousands of children suffering with autism. This was all part of what is called The Omnibus Autism Proceeding.

It is interesting reading about these three test cases put forth as representing all the claims filed for vaccines causing autism. The three test cases all revolved around the measles, mumps, and rubella (MMR) vaccine, and also thimerosal, the mercury-containing preservative used in many other vaccines.

Recently, Dr. William Thompson of the CDC has become a whistleblower and admitted that one of the main studies used to supposedly “prove” there is no link between the MMR vaccine and autism did not follow study protocol, and withheld contradicting data showing an increase in autism among some groups, particularly African American boys.

Since this is one of the keystone studies used by the Institute of Medicine and others to support the government’s claim that the MMR vaccine does not cause autism, what does that say about the legality of the Omnibus Autism Proceedings that now denies compensation for vaccine damages to parents of children with autism?

Also, how does this CDC fraud affect the decision by British medical authorities to attack Dr. Andrew Wakefield, the world-renowned gastrointestinal surgeon and researcher, who published research in the Lancet linking the MMR vaccine to bowel disease in children with autism? He was attacked by a journalist who wrote an editorial in the British Medical Journal accusing him of fraud. However, Dr. Wakefield’s research linking the MMR vaccine to autism have been reproduced in many other studies. Could the attack against him be related to the Omnibus Autism Proceedings which were being challenged in court during that time?

$3.5 BILLION of funds accumulated in the Vaccine Injury Compensation Trust Fund that did not have to be paid out to vaccine victims suffering from autism certainly suggests that there could have been powerful political motivation to discredit Dr. Wakefield’s research. Dr. Andrew’s co-author in the study, Prof. John Walker-Smith, fought an expensive legal battle against the United Kingdom’s General Medical Council and won, being completely exonerated. But Dr. Wakefield’s battle to restore his name and reputation continues.

Who Oversees the National Vaccine Injury Compensation Program and its Trust Fund?

The National Vaccine Injury Compensation Program lists the board members on the Advisory Commission on Childhood Vaccines here. This small group of people “advises and makes recommendations to the Secretary of Health and Human Services on issues relating to the operation of the National Vaccine Injury Compensation Program (VICP). There are nine voting members who provide oversight of the VICP and recommend ways to improve the VICP.”

This is obviously a very powerful group, given that they oversee billions of dollars in the trust fund. So who are they?

Some of the active members on the roster are:

I could not find out much online about Mr. King, the current chairman of the Advisory Commission. He is reportedly “in the State Commercial Banks business” according to several online listings, and is listed as the owner of Sales Motion.

Mr. Smith is an attorney who works for Pfizer, one of the largest drug companies in the world and producer of many vaccines.

The rest of the members are listed here. Most of them have ties to medical schools with strong funding from the pharmaceutical industry.

Why Isn’t the Media Investigating the Fraud and Conflict of Interest in the Vaccine Industry?

Once upon a time, some of them did. Watch this 2008 report where CBS’s Katie Couric introduces Sharyl Attkisson to discuss vaccine corruption

Today, the mainstream media with one voice proclaims that “vaccines don’t cause autism” and no one bothers to investigate it anymore, even when a senior vaccine scientist with the CDC turns whistleblower exposing fraud on the issue.

So don’t expect to get reliable unbiased information regarding vaccines from the mainstream media. Do your own homework and research, and learn the truth about who is supposedly watching over vaccine safety issues, and their trustworthiness.

2 thoughts on “How the Government has Earned $3.5 BILLION from the Claim that Vaccines Don’t Cause Autism”