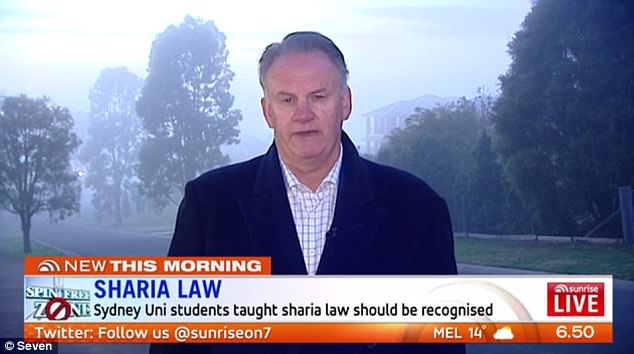 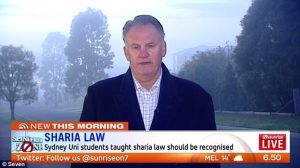 The University of Sydney teaches students how Sharia law fits in Australian law.

Media commentator Mark Latham has blasted the university he graduated from for teaching its students that Sharia law is compatible with Australia’s legal system.

The former Labor leader says the University of Sydney‘s elite law school’s course on Sharia law undermined the separation of religion and state.

‘The system’s gone mad and you want to have a close look at the imbeciles doing this kind of thing in an Australian law school,’ he told the Sunrise program.

‘It’s ridiculous to break that code. There’s no place for Australian law to have Sharia law as part of it.’

The university’s ‘Muslim Minorities And The Law’ course uses a textbook which promotes the idea that ‘Sharia and common law are not inherently incompatible’.

‘They are both ‘law’ in the sense they represent and communicate a set of ‘norms’ that operate at both individual and a community level,’ the book reads.

Dr Salim Farrar and Dr Ghena Krayem, who authored the book and teach the course, also call for research into whether polygamous marriage should be recognised under mainstream law.

‘Whilst some have argued that there may be reasons for changing marriage laws to include polygamous marriages… there have not been any proposals for any legislative amendment proposed by the Muslim communities in our Common Law jurisdictions,’ the book reads.

‘However, there is no doubt that this is an area that needs to be researched, particularly given the fact that anecdotal evidence suggests that this is an increasing practice in Muslim communities.’