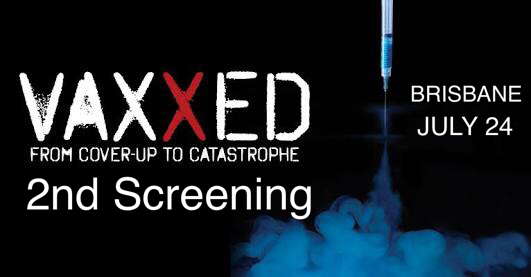 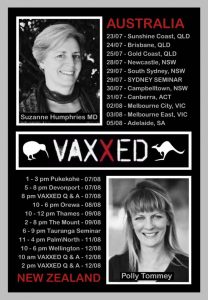 No, it’s not a sequel. It’s the second screening. But this time there are a few surprises in store for you!

Vaxxed – From Cover Up To Catastrophe a documentary about fraud and collusion at the CDC being brought to light via a whistleblower was first screened in the States in April of 2016. It then finally came to our shores on December 6th 2016 and was a huge success.

Despite the mainstream media and pro-vax attempts to have the screening cancelled and shunned it was a sell out event in Brisbane. Screenings then ensued all over the country again with sell-out crowds.

It’s now July 2017 and the demand for more screenings continues as this extremely well made documentary causes waves in every community it reaches. Parents and expecting parents are now more than ever beginning to question the mainstream media scare tactics, the government propaganda and the big Pharma/medical industry lies regarding the safety and efficacy of vaccines.

This Monday night July 24th will see the second screening in Brisbane, Australia. The location is again remaining secret until a few hours before the screening. Unfortunately, this has to be the case because of the pro-vax terrorists that will stop at nothing from harassing and taunting venues and venue owners who wish to exercise their support of free-speech.

It’s time to issue a challenge to your pro-vax friends and let’s face it, we all have them. Invite them to the screening. Get one to come along with you (if you can open their closed mind just a little). Remember, there’s a HUGE surprise to accompany this screening. Sorry, no spoilers. You’ll just have to come along.

Maybe you’ve seen it already? Maybe you even bought a copy of the DVD? Either way don’t just come for the documentary. Come to meet up with more like-minded people and connect with those who have been through the same experiences as you. It’s absolutely imperative we stick together now as these draconian mandatory vaccine laws are being forced on citizens around the globe.

Die on your feet or live on your knees.