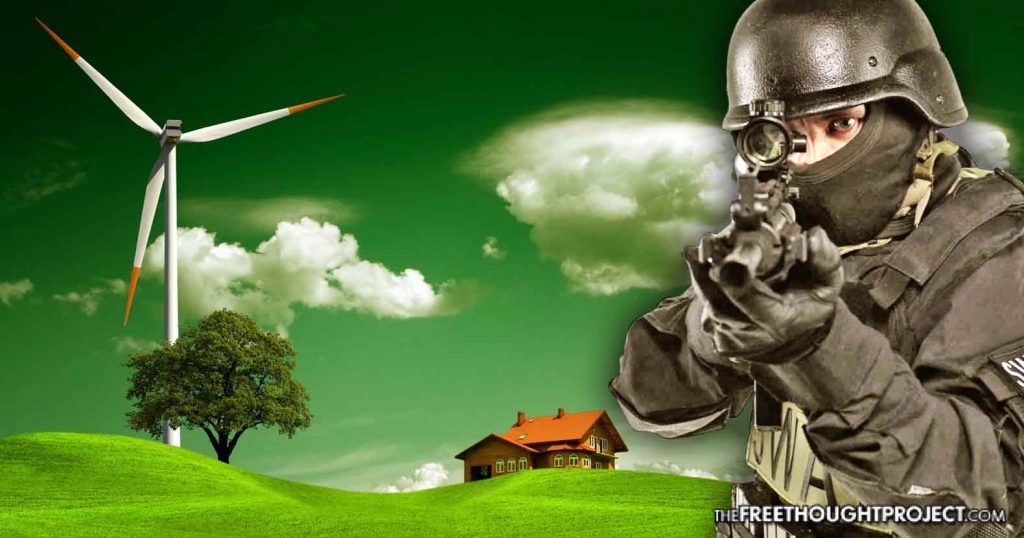 In order for the State to make people believe that “democratic” centralized government is necessary for a functioning society, it must work to keep the people from gaining too much freedom and self-sufficiency.

But technology and information sharing are allowing people, like never before, to break from entrenched power interests that control our money, our economy, our energy, our food, our property – and thus our lives.

For decades the State has partnered with corporate giants – such as the fossil fuel and biotech industries – to maintain the façade of freedom and choice, all the while fleecing the masses. Meanwhile, government employs overt means such as “ordinances” to maintain dependence and thwart the sustainable lifestyle.

As we reported in Nov. 2016, towns and cities across the U.S. are banning tiny homes or severely limiting one of the main reasons for their existence – self-sufficiency. Where tiny homes are allowed, they often must be affixed to the ground in a government-approved fashion and are required to connect to the utility grid.

So, even if someone can power their tiny home with solar energy, they must be ‘connected’ and pay the utility company and government taxes. The State and its corporate partners certainly see the slippery slope to freedom that the masses can gain by harnessing free, clean energy from their rooftop and water from the sky.

Several U.S. states either prohibit rainwater collection or have very strict laws regarding such. While there is a legitimate concern in arid regions about preserving natural streams, does residential rainwater collection (i.e. a 1,000 gallon cistern) actually have any effect on stream water levels? Governments immediately jump to restricting the public’s ability to live self-sufficiently, without providing actual data to justify their actions.

Solar panels are a bigger target for establishment forces that can only thrive if the masses conform to a centralized grid. States such as Indiana and Nevada are passing bills that are designed to cripple the fast-growing solar industry, while keeping in place the same old favors for fossil fuel interests. Solar energy technology is improving at light speed (pun intended) and prices are crashing due to market forces, meaning that rooftop solar – and self-sufficiency – threatens to upend the long dominance of fossil fuels.

Vegetable gardening is not even immune from State interference. In Miami Shores, a couple wasforced to destroy their front yard vegetable garden after government threatened them with a fine of $50 each day it remained.

“When our garden was in full production, we had no need to shop for produce. At least 80 percent of our meals were harvested fresh from our garden,” said Hermine Ricketts. “This law crushes our freedom to grow our own healthy food. No one should have to expend time and energy dealing with such nonsense.”

In any reality but the American police state, a front yard vegetable/herb garden would draw respect and admiration. In the corporatocracy, though, buying food produced in centralized factories is preferred.

‘Death by a thousand cuts’ could sum up the strategy of the State to derail the movement toward freedom and self-sufficiency. Everything essential to living is subject to rules and regulations which seems to have a natural tendency toward ever greater restriction.

However, it is entirely possible for an informed populace, armed with technology, to overcome the forces that would keep us dependent on centralized, corrupted systems.

Justin Gardner is a peaceful free-thinker with a background in the biological sciences. He is interested in bringing rationality back into the national discourse, and independent journalism as a challenge to the status quo. Gardner finds inspiration in the garden and people who promote peace and goodwill to all life.  This article first appeared here at TheFreeThoughtProject.com

3 thoughts on “In The Land Of The Free, Sustainable Living Is Becoming A Crime”