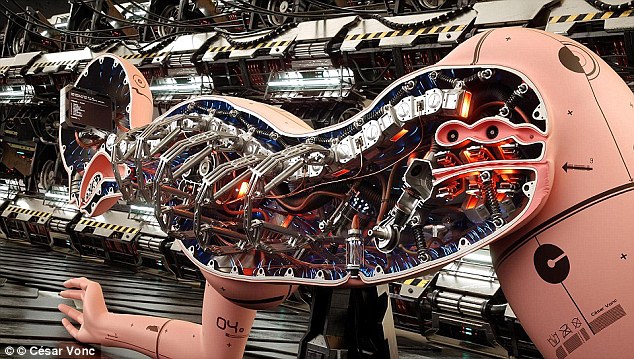 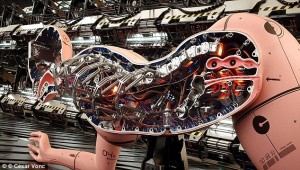 A sex scene between a man and a robot in Channel 4 thriller Humans may have shocked audiences, but sex between humans and machines may soon become the norm.

As humans spend more time in virtual realities – including online gaming and social media – intimate relationships with androids might even improve our mental health, according to academic Dr Helen Driscoll, a sex psychologist.

And our physical relationships will come to be seen as primitive in the near future as humanity embraces machines as partners.

Sex mannequins that you can order online already exist, and rapid advances in technology will enable them to ‘come to life’, according to Dr Driscoll in a blog post for the Huffington Post.

Robophilia – the word for a sexual attraction to robots – seems like an alien concept to us now, but could become the norm as our attitudes catch up to the technology.

‘As virtual reality becomes more realistic and immersive and is able to mimic and even improve on the experience of sex with a human partner, it is conceivable that some will choose this in preference to sex with a less than perfect human being,’ said Dr Driscoll.

Dr Driscoll points to people who have lost their partner or who live alone as people who might benefit psychologically from a virtual sexual relationship. ‘After all a virtual partner is surely better than no partner at all.’

Virtual affairs could also present a problem in the future, with some partners seeing sex with a machine as similar to sex with another person, according to Dr Driscoll.

The amount of time we spend online – communicating via emails and social media – is already a problem for some people, but our relationships with other humans could soon be conducted entirely online.

As we spend more time in virtual reality and living alone, this will lead to increased mental health problems, according to Dr Driscoll.

The lack of human contact is currently harmful, as humans are social animals and isolation is linked with mental health problems, she said.

Recent studies have shown that young Japanese people are already avoiding sex and intimate relationships, with half of Japanese adults saying they no longer have sex.