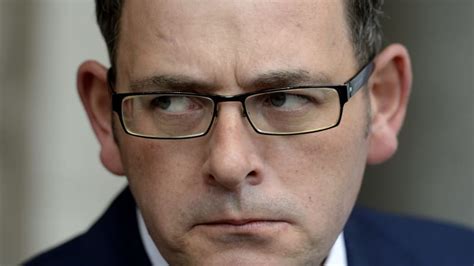 Janet Albrechtsen asks if Victorian Premier Daniel Andrews has lost control of his state? A rhetorical question perhaps, but Andrews lost control ages ago with almost every administrative department. Why? Because he is a dope and follows the advice of other dopes. There is far too much to itemise herein, except to say his state now has a COVID-19 outbreak of 49 or 50 cases, placing the entire country on a new alert of possible border closures meaning hardship and huge economics costs. The people of Victoria need to wake up and smell the coffee.
Six years ago, it was a case of “Daniel who?”. Today, Daniel Andrews is the most powerful premier in the country. But it hasn’t been a happy week for him. Victoria has recorded the worst spikes in coronavirus despite his government imposing the deepest, longest and most rigid lockdown rules.

Until recently, it seemed that Victorians were the nation’s biggest collection of lemmings, mostly happy with harsher rules set down in robotic decrees by Andrews. But this week there are signs that Mr 85 Per Cent may be losing control of his state.
All political leaders know, or should know, that they are popular until they are not. But what triggers a downfall is anyone’s guess, especially when it comes to the state recently dubbed Victori­stan for Andrews’s iron-fist style of leadership. Just as it was anyone’s guess as to why a dorky-looking bloke managed to turf out the Liberals in 2014, the first time in almost 20 years that a government was removed after one term.

The Victorian Premier has a hold over the Garden State that beggars belief given his background. Andrews has never run a business, never worked in the risky world of private enterprise.
He entered politics after he left university, leaping early into senior political positions and building an unremarkable record as minister under two Labor governments. Andrews would be hard-pressed to understand the lives of most Victorians and vice versa.
That said, Andrews’s singularly focused background of politics means he is well-schooled in its dark arts. He is a canny operator, ably assisted by a Liberal opposition that hasn’t touched the sides of his grip on power. They don’t seem to know which way to look, let alone which direction to steer their party.

Even before the political culling of Adem Somyurek, the apparently powerful right wing of the Victorian Labor Party hasn’t left much of a mark on Andrews either.
Influential swaths of the public service appear to be in service to Andrews and his left-leaning ideology.

The politics of Victoria’s Deputy Chief Health Officer, Annaliese van Diemen, are clear enough after she posted a tweet like­ning the impact of the arrival of James Cook to COVID-19.
Real or perceived, many worried that the Victorian police worked too closely in tandem with Andrews’s hardline leadership even before Brett Curran, chief of staff to Andrews when he was opposition leader, was appointed assistant police commissioner last December. The Age has reported that, compared with Queensland, Victorian police have issued triple the number of fines for breaking COVID-19 rules, and four times more fines than in NSW. But Black Lives Matters protesters escaped their attention.

It helps Andrews too that the media in Victoria is less ferocious than when Jeff Kennett ruled the state with a similarly tight rein.
Debt-Trap Dan has a nice ring to it. But the Morrison government is also soft on him, failing to land a blow on a premier who interferes with foreign policy by signing deals with China that will allow the rising communist power to put down roots in Australia.
It was, frankly, embarrassing to watch the federal Education Minister meekly apologise to Andrews for calling him out for refusing to allow schoolkids back into the classroom after the nation’s Chief Medical Officer said it was safe for them to return.

Yet the rise and rise of Andrews, his mounting confidence, the stark arrogance in his choice of words, his dictatorial language and his hypocrisy during the COVID-19 crisis may mark the high before the fall. The Victorian Premier seems to love power more than is healthy. From the start, Andrews has chosen jackboot-style language when telling Victorians what to do. There has been nary an ounce of empathy for those who own businesses, the unemployed or even the lonely.
His diktat when telling people in romantic relationships who lived apart to stay apart was chilling. “That’s not work, that’s not care-giving, that’s not medical care … and it does not comply with the rules,” Andrews said during a press conference. “People should not do that.”

Wanting Victorians to believe that they were all in this crisis together, the keen golfer banned golf with similarly threatening language. “No one likes playing golf more than I do, no one. You don’t need to play golf,” he said. “No round of golf is worth someone’s life.”
Except that Victorians were not all in it together when Andrews used very different language towards BLM protesters. “I’m not going to the protest. I would suggest to other people they shouldn’t go to the protest either,” he said.

After a spike in coronavirus numbers last Saturday, Andrews reverted to authoritarian commands when reintroducing restrictions on gatherings in Vic­toria: “We will go door to door if we have to, to check that people are doing the right thing.” By Tuesday, after more COVID-19 outbreaks in Melbourne’s outer suburbs, some spread by people who had tested positive to the virus, Andrews said: “There are powers to deal with those people. Wilful conduct needs to dealt with.” It is weird, and farcical, listening to a schtick that is more military commandant than premier. Andrews could have been cast as Colonel Klink in Hogan’s Heroes, with his “we have ways of making you talk” routine.
That said, the Victorian Premer seemed to spook even himself this week. He added this curious postscript to his commandment that people would be dealt with. “But at the same time, they’re not decisions that I make,” he said, “and I don’t think that you’d ever want to get into a situation where the Premier was directing police on who to fine.” Is this the sign of a premier who is concerned that many Victorians think precisely that? They certainly have reason to be increasingly concerned that Victoria is becoming a crony state, given the Premier’s heavy-handed and hypocritical management of COVID-19.

The Premier didn’t have much to say about the outbreak of the state’s largest cluster at Melbourne abattoir Cedar Meats. The company’s owner, Tony Kairouz, was an ALP member from 1993 until his membership lapsed in 2017. Cedar Meats donated $15,000 to the Victorian Labor Party in 2014. As Rachel Baxendale reported in this newspaper this week, “It is no coincidence the city’s northern and western suburbs, where the virus has been spreading most rapidly in recent weeks, are the same areas where COVID-19 ran rampant among meatworkers in April and May.”
It’s tempting to yawn over Victorian politics. In any case, you get the government you deserve, right? Except that when things go wrong in a state with a 23.6 per cent share of the national GDP, the rest of the country will suffer too. As Tony Parkinson recounts in his biography of Kennett, in 1992 Paul Keating, the prime minister at the time, told the Victorian premier to “get your house in order” before allowing Victoria to borrow an extra billion or so.
The Morrison government faces the same dilemma with Victoria. But Andrews is unlikely to be intimidated by the Prime Minister saying on Thursday: “We can’t flick the light on and off and on and off and on and off.”

If Victorian voters do turn away from Andrews, the Liberals in Victoria and in Canberra can’t take the credit. Not on their record. The Premier who runs the most centralised state in the country treats Victorians dismissively, revels in foreign policy, uses brute power to bring down internal enemies, uses taxpayer-funded staff in red shirts to campaign for his government, and rewards Labor mates, just might be responsible for his own fall.