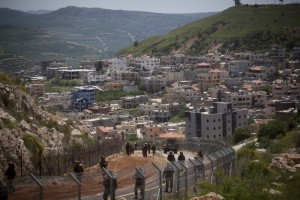 Murdoch stated in 2013 that “Israel is the greatest ally of democracy in a region beset with turmoil and radicalism.” This was an audacious statement given his investment in a company breaking the basic tenets of international law.

According to Geoff Rochwarger, CEO of Afek, energy independence is the new Zionism.

The Afek oil and gas exploration company has almost completed its second drilling test in the Golan Heights, a part of Syria which Israel has occupied since 1967 and annexed in violation of international law.

The test is part of a three-year program to see if hydrocarbons in the area could lead to oil or gas for Israel.

Israel is fuel-poor and its domestic energy woes could be eased in the interim if the government progresses on deals in relation to the Tamar and Leviathan gas fields in the Mediterranean Sea.

In addition, Israel is now taking advantage of the chaos in Syria to look for precious resources to extract from the occupied Golan Heights.

Israel relies heavily on imports to meet its energy consumption, and with frequent vicissitudes with its neighbors, its need for energy resources continues to shape the nature of its occupation in the Gaza Strip and the West Bank, as well as the Golan Heights.

With the Syrian government in disarray, Israeli authorities gave the go-ahead to Afek, a subsidiary of Genie Oil and Gas, to conduct drilling in 10 wells in the occupied Golan Heights in their search for fossil fuels.

According to Howard Jonas, chairman and CEO of Genie Energy Limited, the parent company of Genie Oil and Gas, the company’s team of experts believes that what lies under the Golan Heights could make Israel energy independent and “contribute to the diversification of the free world’s energy supply away from a crippling dependence on unfriendly sources” (see the Genie Energy annual report for 2014).

Murdoch stated in 2013 that “Israel is the greatest ally of democracy in a region beset with turmoil and radicalism.” This was an audacious statement given his investment in a company breaking the basic tenets of international law.

The chairman of Genie Israel, Effie Eitam, who lives in the Golan Heights settlement of Nov, is a former military commander and member of the National Religious Party. He once referred to Palestinian citizens of Israel as a “ticking bomb” causing a “cancer” in Israel. He also told The New Yorker in 2004, that Palestinians were “creatures who came out of the depths of darkness” adding that “we will have to kill them all” before backpeddling slightly: “I know it’s not very diplomatic. I don’t mean all the Palestinians, but the ones with evil in their heads.”

Afek claims on its website that Syria’s occupied Golan Heights is part of the “State of Israel.” The company was granted a petroleum exploration license by the northern regional planning and building committee, in direct violation of international law by completely ignoring the Annex to the Fourth Geneva Convention — which applies to the occupied territory.

In February, an Afek subsidiary started drilling its first exploratory well and drilled to a depth of 1,000 meters. The samples extracted are now undergoing analysis and drilling continues. In the event that the company finds oil, it will request the required licenses to begin the production stage.

There are grave breaches of international law as well as environmental concerns at play here. Firstly, the type of oil expected in the area may not be in liquid form and could require fracking — a process that involves injecting large amounts of scarce water and toxic chemicals into the ground in order to force the hydrocarbons to the surface.

Whether it is conventional oil or shale oil, fracking or drilling could lead to oil seepage into the underground water table, polluting Lake Tiberias — the biblical Sea of Galilee — potentially rendering local water supplies undrinkable and destroying the ecosystem for generations to come.

The Golan plateau was occupied by Israel during the 1967 War. UN Security Council resolution 242 and several other resolutions since have called for Israeli withdrawal from the occupied territory and condemned Israel’s actions there.

These have included: annexation and imposition of Israeli law in 1981, an action the UN Security Council declared “null and void.” Israel has also transfered its own population into the area for the purpose of colonization and the use of the territory’s resources for its own economic interests.

The Golan’s fertile land and water resources have been a strategic interest for Israel and now its energy potential may bring huge financial rewards.

Despite international criticism, Israel’s inherently discriminatory and exploitative policies inside the Golan continue without sanction. Israeli ministers have voiced their desire to capitalize on the destabilization of Syria as an excuse to cement Israel’s illegal hold on the territory.

Whilst Israel continues to exploit the natural resources of the territories it occupies, the international community continues to do nothing to enforce its decisions as the occupation of the Golan verges on reaching the 50-year milestone.

The Syrian government had planned to build a pipeline across the Middle East into Lebanon and the Mediterranean for the European markets. It had signed agreements with Iran and Iraq towards this end.

With Syrian oil reserves in decline and the country in chaos, the government has no capacity to challenge the current Israeli exploitation of the country’s Golan resources.

It seems likely therefore that Israel will have a free hand to loot Syrian oil from the Golan, backed by the West.