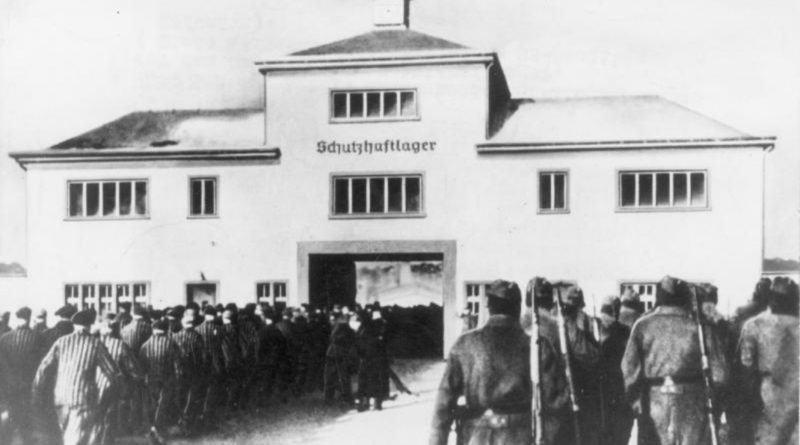 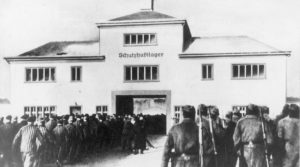 According to the standard “jewish” accounts of the camp, Sachsenhausen possessed a small homicidal gas chamber from 1943 to 1945, in which several thousand people were killed. This chamber, however, has received only a marginal treatment in the literature. One of the reasons for this marginality is that the technical operation of this chamber clashes with the standard overall portrayal of National Socialist gassing technologies.

The gassings did not take place with Zyklon B, as in the alleged homicidal gassings at Auschwitz and Majdanek, nor with engine exhaust, as is claimed took place at Chelmno, Belzec, Sobibor, and Treblinka, nor with pure carbon monoxide, as is stated for some euthanasia institutions and Majdanek. Rather, they took place with an elaborate gassing apparatus that used a gas in liquid form. This apparatus was given a detailed description, including diagrams, in a report authored by a Soviet team which was active in the camp from 10th to 22nd June, 1945.

This report, together with the confirmatory statements which the judeo-Soviet investigators extracted from former Sachsenhausen workers in the context of the Berlin-Pankow Sachsenhausen trial, forms the foundation of the accepted account of the functioning of the Sachsenhausen homicidal gas chamber. The description of the gas chamber’s functioning contained in the Soviet technical report is not derived from any earlier source, nor is it confirmed by sources originating outside of Soviet aegis, which rarely offer any description of the gas chamber’s nature and, when they do, disagree with the Soviet technical report.

In perhaps the first revisionist article on the alleged Sachsenhausen gas chamber, Carlo Mattogno observed[1]that the system described in the Soviet technical report is unquestionably based on the DEGESCH Kreislauf system for Zyklon B gas chambers, without any indication of specialized killing technology. The Kreislauf system is not alleged to have been turned to homicidal use at other locations, but is supposed to have been used only for its intended (non-homicidal) purposes.

The judeo-Soviet report, therefore, depicts a technical system that matches the apparatus accepted to have been used throughout the rest of Europe only for sanitary gassings, and does not match any of the systems said to have been used for homicidal purposes. This raises the strong suspicion that the details of the gassing system described in the judeo-Soviet technical report on Sachsenhausen were filled in from an actual delousing-gas-chamber system rather than from any homicidal gas chamber.

In (implicitly) responding to this line of argument, Günter Morsch has, while offhandedly conceding a similarity to the DEGESCH Kreislauf system, emphasized the novelty of the Sachsenhausen gassing system[2] and even claimed that it represented a “new, more perfect killing technique.”[3] The claim of novelty for the Sachsenhausen system rests on the one significant difference between regular DEGESCH Kreislauf gas chambers and the installation described in the Soviet technical report, namely that the Soviet report describes a system that used a bottled gas rather than Zyklon B.

The Sachsenhausen Delousing Chambers and their Conversion to Areginal

At his trial, and in a pretrial interrogation, Bruno Tesch testified that in 1944 he had converted the gas chambers at Sachsenhausen from the Zyklon B system to the use of Areginal gas. During the third day of his trial, on 4th March 1946, he gave two pieces of testimony on this subject, although the matter was largely unrelated to the court’s interest. In the first piece of testimony, he explained the work he had done at Sachsenhausen.

Q. What was the purpose of your visit to Sachsenhausen?

A. I showed the disinfection chambers to the Minister of the interior and to a certain Mr. Seeling. I also paid a second visit to Sachsenhausen about July 1944 when I had a gas chamber altered from working on prussic acid to working on “Original.”[4]

Q. What was the gas chamber in Sachsenhausen being used for?

A. It was being used for the disinfection of persons’ clothing.

Q. Have you seen the gas chamber working?

Q. Which gas was used to operate these [10-cubic-meter delousing] gas chambers?

Q. Has an experiment ever been made to use another gas for these gas chambers?

Q. Has this “Original” gas ever been used in concentration camps?

A. Yes, it has been done in the concentration camp Sachsenhausen.[6]

During an interrogation months earlier, Tesch had stated:

Q. Did you yourself supervise the extermination of vermin in Sachsenhausen?

A. No. They were 10 cubic metres chambers, which were placed four in a row.

Q. In what part of the camp?

A. Through the first gate when I was stopped. Then through the second gate and about 500 metres further on, on the right hand side. […]

Q. Did you give any instruction in the use of your gas to any personnel inside Sachsenhausen?

Tesch’s account of the Sachsenhausen delousing chambers is supported by a number of other sources. In a December 1945 statement made in the context of Tesch’s trial, the managing director of DEGESCH, Dr. Gerhard Peters, confirmed Tesch’s statement that there were four 10-cubic-meter gas chambers at Sachsenhausen,[8] a statement he repeated in a 24 February 1947 affidavit.[9] More importantly, in an October 1947 interrogation, not only did Peters affirm that there were four (delousing) gas chambers at Sachsenhausen, but also was questioned about Areginal gas, and confirmed that due to the scarcity of Zyklon B, Areginal gas had been introduced for delousing at Sachsenhausen.[10] Still further support comes from an interrogation of Tesch and Stabenow employee Erika Rathcke, who mentioned that a doctor at the SS disinfestation school at Sachsenhausen had performed experiments with Areginal.[11]

Contemporary documents also confirm that conversions of Zyklon B gas chambers were underway in the summer of 1944. A letter from Auschwitz Zentralbauleitung chief Werner Jothann to Tesch & Stabenow remarks:

Our garrison surgeon informs us that, of late, Zyklon B gassing chambers are to be converted to “Ariginal gassing.” Garrison surgeon wanted to get in touch with you directly in connection with the corresponding modifications.[12]

Tesch & Stabenow’s reply confirms that Areginal conversions were taking place, and that hardware had been manufactured for this purpose:

We have noted that gassing chambers are to be arranged also for AREGINAL gassing. Your garrison surgeon has not yet approached us in this matter, but on 9 cr. we received instructions from Reichsarzt-SS und Polizei, the Top Hygienist, to include the additional AREGINAL equipment. No modifications of the gassing chambers are necessary, it is sufficient to install the AREGINAL gassing unit as well. You will receive an appropriate installation drawing when the AREGINAL units have been supplied by the manufacturer. For the sake of completeness, we inform you here that the price of the AREGINAL-unit amounts to RM 27.– and the steel requirements are 12 kilograms.[13]

The project of converting delousing chambers to Areginal gas[14] has also been described in some detail in the standard monograph on Tesch and Stabenow.[15]

Areginal, unlike Zyklon B, was stored as a gas and accordingly was kept in bottles. Hence, the conversion of the Sachsenhausen delousing chambers to Areginal offers an explanation for the otherwise baffling Soviet technical report: it was inspired by the observation of a DEGESCH recirculation gas chamber that had been modified to use Areginal gas. 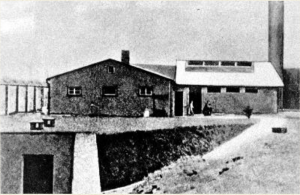 Photo of the hygiene building of the former KL Sachsenhausen. 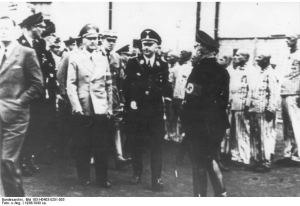 Photo of the hygiene building of the former KL Sachsenhausen.

Remains of the hygiene building in the former KL Sachsenhausen, which was demolished in 1952/53. In the foreground: the shower room, now incorrectly referred to as the “gas chamber.” 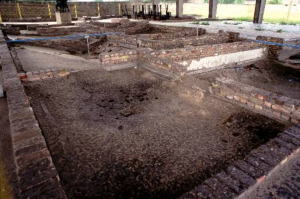 The Errors in the Soviet Technical Report and Their Causes

The Soviet technical report, however, is clearly not a faithful and accurate account of the Sachsenhausen delousing plant. No matter how one interprets it, it is unquestionable that the report contains inaccuracies. For example, the technical report claimed that the system used Zyklon A, which (they said) contained 30% liquid hydrogen cyanide.[16] In fact, Zyklon A does not contain 30% liquid hydrogen cyanide, but 90% methyl cyanoformate and 10% methyl chloroformate.[17] Moreover, as Carlo Mattogno has pointed out,[18] the system described in the Soviet technical report is not suitable for the dispersion of Zyklon A. In the light of such inaccuracies, it is no surprise that other aspects of the report would also be inaccurate.

Chief among the report’s inaccuracies pertains to the location of the gas chamber, which was said to have been located in the crematorium. The apparatus the Soviets describe, however, was not found at that location. According to Morsch, it was found in the battery building of the Industriehof, apparently in a disassembled state,[19] whereas according to the 25th June 1945 report of the Soviet Forensic-Medical Commission under the leadership of Lt. Colonel F. I. Schkarawski, the apparatus was found in an “artesian well.”[20] While the Soviets claimed that they could recognize that the gassing hardware matched the alleged gas chamber room in the crematorium, we have only their unsupported word on this, the relevant physical evidence having been destroyed by the East German authorities in the 1950s. 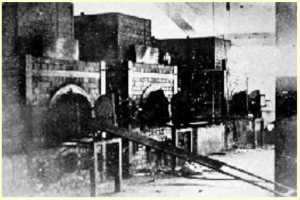 The association of crematoria with homicidal gas chambers had been a common feature of Soviet propaganda for quite some time when the Sachsenhausen report was written, so it is no surprise that the report repeated this narrative element. The authors could also draw support for this story from camp rumor, which had picked up the idea of a gas chamber associated with the crematorium.[21] (On the other hand, the idea of a gas chamber in the crematorium was a relatively late addition to the Sachsenhausen “Prisoners’ report,”[22] indicating that this rumor was not particularly strong.)

Given this context, it is no surprise that the Soviet investigators couched their report in the framework of the crematorium / gas chamber connection, but there is nothing to show that they found anything to support that narrative. On the contrary, the Areginal-adapted Kreislauf chambers which they described came from the delousing chambers, not from the crematorium. Clearly the Soviet investigators felt free to embellish their report for political purposes; after all, the authors of Soviet technical reports were not scrupulous about distorting the truth in order to tell a desired story.[23]

The Soviet report is also questionable in another respect, namely in the description of the usage of glass bottles to contain the gas, which were crushed in the process of gassing. Areginal, however, was normally stored in steel bottles.[24] It is conceivable that Areginal might at some point have been stored in glass bottles, perhaps because of the inconvenience involved in obtaining tightly-rationed steel.[25] Alternatively, the Soviets may have simply been confused by the various disorganized bits and pieces of hardware they found strewn about the abandoned camp, just as they were demonstrably confused about the respective natures of HCN and Zyklon A, and erred in their reconstruction of the gassing system.

For a more in depth examination of the alleged gas chambers at Sachsenhausen, see Carlo Mattogno’s work here. [translate to English] http://vho.org/VffG/2003/2/Mattogno173-185.html

One thought on “Judeo-Holocaust Lies: The Homicidal Gas Chamber at Sachsenhausen”