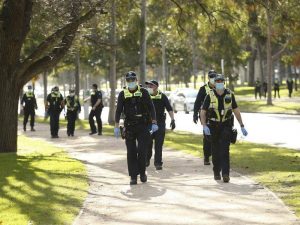 Melbourne, that glorious city in the state of Victoria in Australia, granted me some of the best travel days of my life during two separate trips each lasting a full week.

A happy, civilized, highly educated people are here living amidst modern architecture, inspiring bridges, and natural beauty, a place where even the police are kind, and when you ask them for directions they reply with a smile, and when you say thank you, they say “No worries.”

Now there are big worries in Melbourne.

The Premier has imposed a vicious police state without precedent in this country’s history. His name is Dan Andrews (a sweet-sounding name that masks the tyrant he has become), and he tweets out pictures of empty streets to brag about what he has achieved in the name of suppressing a virus.

Tacitus’s line about the Roman empire comes to mind: “Where they make a desert, they call it peace.”

Australia is the only country in the world that has a law that people can’t be mean to each other. Now it is host to one of the world’s meanest governments.

The catastrophe began with a spring lockdown before there were any cases of C-19 much less deaths. The ethos in Australia was one of extreme exclusion and suppression of the virus, not as bad as New Zealand but pretty bad. The rest of the world can catch this disease, but Australia would use its geographical isolation and political intelligence to ban the virus. The virus will be in awe and know to stay away forever.

It’s not a good theory because that’s not how viruses work.

Still, it seemed to work, at first. That’s because the virus had yet to arrive.

When the virus did arrive, the futility of the suppression strategy was revealed.

Melbourne had set up quarantine hotels for people arriving from abroad or returning from cruises. They would spend 14 days in isolation to purge themselves of possible infection. Then all would be okay. There was a problem: the wiley virus escaped.

As a result, a nation’s pride in having suppressed the virus turned to panic and full lockdown. Internal borders are sealed. And Melbourne has become a living hell, not because of the virus (which is still mild) but because of the unleashing of a hellish police state.

A friend summarized the situation for me:

This is lockdown ideology at work. It is tyranny without limit, at the expense of all human dignity, decency, and rights. The politicians make a desert and call it health.

Like everywhere else on the planet, Melbourne will have to reach herd immunity from C-19 at some point. Those who deny that are risking not only liberty and health but civilization itself.

Perhaps the other states in Australia will observe the destruction in Victoria and learn to take another path when the virus first arrives in their territory, as it surely will. Lockdowns are not science; they are brutality.

I cry for the once-great city of Melbourne this day. May there be justice. And may its future political leadership be granted some modicum of decency and wisdom.

One thought on “Madness in Melbourne”