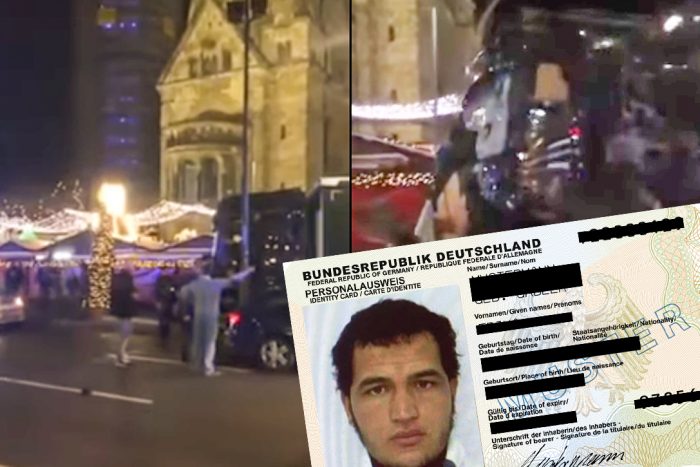 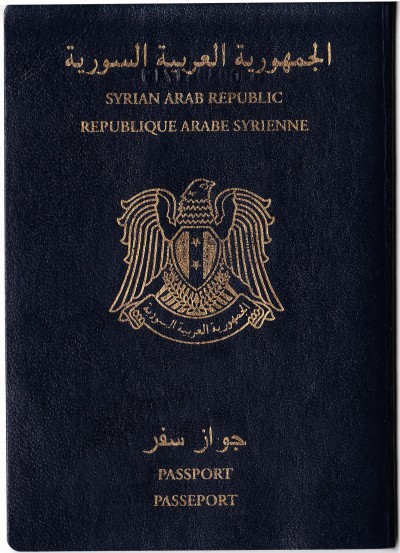 This article reviews the “mysterious” phenomenon of IDs and Passports of terror suspects routinely discovered (often in the rubble) in the wake of a terrorist attack.

In most cases the alleged suspect was known to the authorities.

Is there a pattern?  The ID papers of the suspect are often left behind, discovered by police in the wake of a terrorist attack.

According to government and media reports, the suspects are without exception linked to an Al Qaeda affiliated entity.

None of these terror suspects survived. Dead men do not talk.

In the case of the tragic events in Manchester, the bankcard of the alleged suicide bomber Salman Abedi was found in his pocket in the wake of the explosion.

Legitimacy of the official stories? The UK is both a “victim of terrorism” as well as a “State sponsor of terrorism”. Without exception, the governments of  Western countries which are victims of terror attacks, have supported, directly or indirectly, the Al Qaeda group of terrorist organizations including the Islamic State (ISIS), which are allegedly responsible for waging these terror attacks. Amply documented Al Qaeda is a creation of the CIA.

Below is a review of the circumstances and evidence pertaining to passports and IDs discovered in the wake of selected terror attacks, with links to Global Research articles and media reports (2001-2017). (This list is by no means exhaustive)

The Manchester Terror Attack,  May 2017.

Manchester Bomb Suspect Said to Have Had Ties to al Qaeda …

NBCNews.com–May 23, 2017 MANCHESTER, England — Salman Abedi, the 22-year-old British man … in a suicide-bomb attack, had ties to al Qaeda and had received terrorist training … was identified by a bank card found in his pocket at the scene of the ...

“A bankcard has been conveniently found in the pocket of the … Daesh has claimed responsibility for the Manchester attack, but without …” 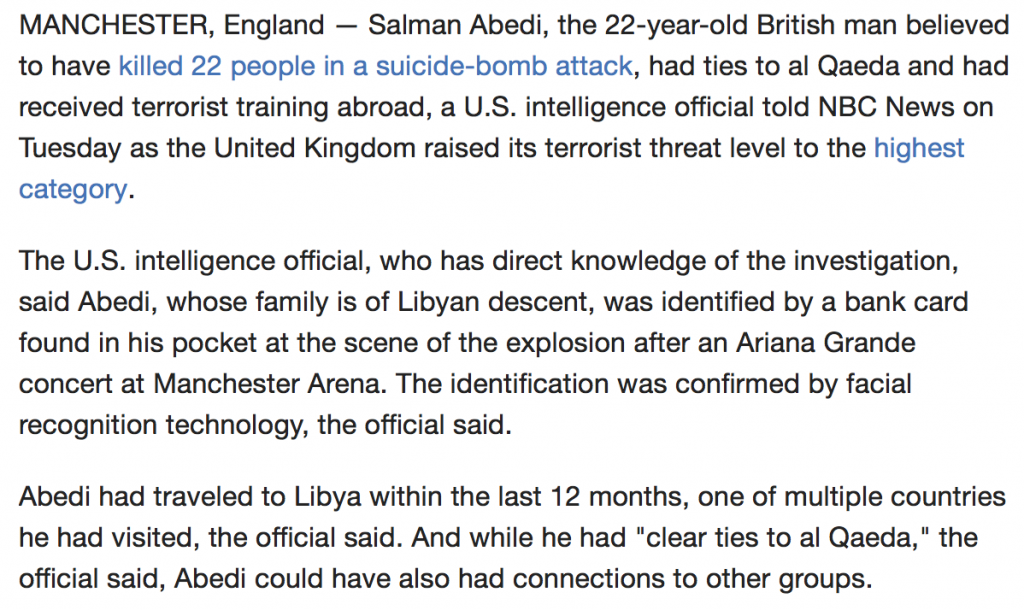 No image of the alleged bankcard is available.

Ironically, the suspect Abedi was first identified by Washington rather than UK police and security. How did they know who was the culprit 3 hours after the explosion? According to Graham Vanbergen:

In the early hours of the morning of the 23rd May – approximately 02.35BST   NDTV via the Washington Post stated quite categorically that:

“U.S. officials, speaking on the condition of anonymity, identified the assailant as Salman Abedi. They did not provide information about his age or nationality, and British officials declined to comment on the suspect’s identity.”

This was published at a time when British police and security services were refusing to make any statements as to who they thought the perpetrators were because at the time, they were dealing with the immediate aftermath of the event.

The Berlin Truck Terror Suspect and the Curious Matter of ID Papers Left Behind. By WhoWhatWhy. Global Research, December 22, 2016. Who What Why 21 ….:

The suspect’s identity papers were found inside the truck used in Monday’s attack on a Christmas market, which left 12 people dead, German security officials said.

The suspect was known to German security services as someone in contact with radical Islamist groups, and had been assessed as posing a risk, Interior Minister of North Rhine-Westphalia Ralf Jaeger told reporters.

The Nice Terror Attack: Towards a Permanent State of Martial Law in … the alleged perpetrator is dead and conveniently left behind his ID.

According to Peter Koenig in relation to the Nice terror attack:

During last night’s celebration of the French National Holiday, around 11 PM, a speeding truck plowed into a crowd of thousands who were watching the fireworks along the Mediterranean Boulevard Anglais. The driver of the truck, was simultaneously and  indiscriminately shooting into the crowd. He was able to run for 2 kilometers before being stopped by police, which instantly shot and killed him.

A horrendous terror attack, killing hordes of people, spreading pain, misery, fear and outrage in France, Europe – the world over.All indications signal the Big Script of yet another false flag; yet again in France.

The young truck-driver was identified as a 31-year-old Frenchman, resident of Nizza, with Tunisian origins. As in previous cases, ‘coincidence’ has it that his identity papers were found in the truck. 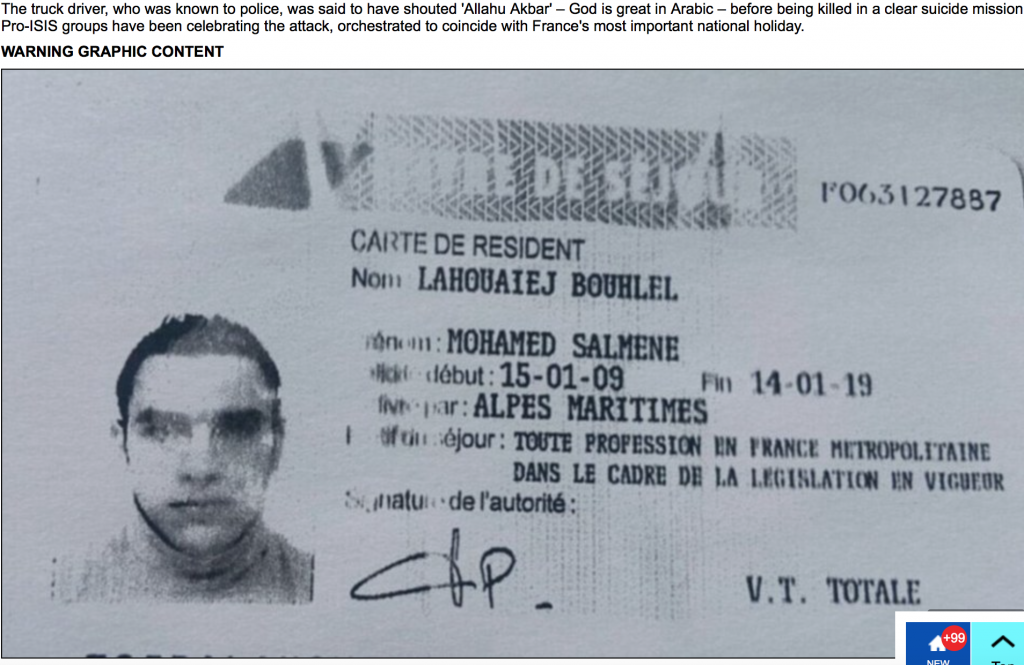 The young man is instantly killed by the police. Dead people cannot talk. A pattern well known by now.

Police found the ID of Said Kouachi at the Scene of the Charlie Hebdo Shooting. Does this Sound Familiar?

“According to news reports, police found the ID of Said Kouachi at the scene of the Charlie Hebdo shooting. Does this sound familiar? Remember, authorities claimed to have found the undamaged passport of one of the alleged 9/11 hijackers among the massive pulverized ruins of the twin towers.”

The Paris Terror Attacks and 911: Similar “Evidence” Makes it Suspicious

The Islamic State (ISIS/ISIL) declared that it was responsible for the latest attacks in Paris as did Al-Qaeda who also claimed responsibility for 911. … However, there are similarities between the terror attacks in Paris and New York City on September 11th.

First, Syrian and Egyptian passports from two of the suicide bombers were found at the scene of the stadium attack in the northern part of the city. After both suspected terrorists detonated their explosive devices, their passports were still found.

This brings us back to the September 11th terror attacks where U.S. officials recovered a passport intact a few blocks from t
he World Trade Center which did belong to one of the hijackers,

In the context of the enquiry about the Paris massacres, a Syrian passport (image right) was found next to one of the kamikaze bombers of Stade de France. After being pointed out as responsible for the attacks by President Hollande, ‘the Islamic State’ claimed that they had engineered the onslaught. The French executive, that had already stated tht they wanted to take action in Syria allegedly against ISIS, but actually against Bachar El Assad, who ‘has to go’, sees in this a significant clue that comfort their military expedition.

On Tuesday, July 12th, Lindsay’s wife Samantha Lewthwaite had called police to report her husband Germaine (“Jamal”) missing.  Police searched their home immediately. The next day, on July 14th, police announced that they had Lindsay’s ID and he was the fourth bomber. Lewthwaite was incredulous and refused to believe the accusation without DNA proof.  The police identification was stunning because they had been claiming that all of the suspects looked Pakistani; there was no way anyone could mistake the big, black Lindsay for an Asian. What had police been looking at?

Was America Attacked by Muslims on 9/11?

9/11 Truth and the Joint Congressional Inquiry: 28 Pages of Misdirection on the Role of Saudi Arabia

For years the 9/11 Truth movement (9TM) has been vainly pleading with ….. FBI agent Dan Coleman explains how the passport of 9/11 hijacker …

“In the official version for 9/11 the FBI claimed that they found the unscathed passport of one of the pilots near one of the towers that were reduced to ashes by explosions whose heat melted even the steel columns in the buildings’ structure. The fourth plane’s crash near Shanksville also yielded a passport which, though scorched, still made it possible to read the person’s first name and surname and to see his ID photo. This is all the more disturbing as nothing at all was left in the crater, no part of the plane or of the people travelling in it, only this partly scorched passport.

Confirmed by Dan Rather CBS News, “a passerby found the passport of one of the hijackers” on the street just hours after the 9/11 attacks. (Video at 1′.23″)

According to Who What Why:

The Visa of Satam al-Suqami: This identify document of one of the alleged 9/11 hijackers somehow survived unscathed a few blocks from the twin towers, though the plane itself was virtually obliterated. 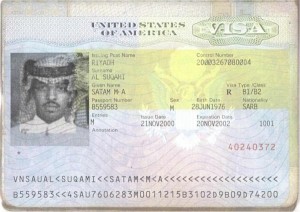 The Passports belonging to Ziad Jarrah and Saeed al-Ghamdi: The passports of two alleged hijackers of United Airlines Flight 93 supposedly survived the fiery crash in Pennsylvania that left the aircraft itself charred and widely scattered—with one passport entirely intact. 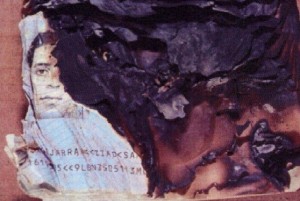 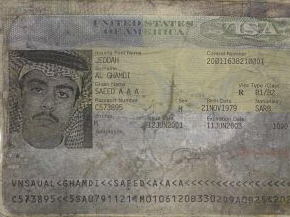 Can we believe the official narrative of HM government?

No questions asked. Can we believe the Western media?