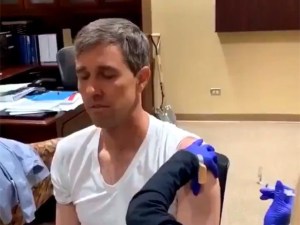 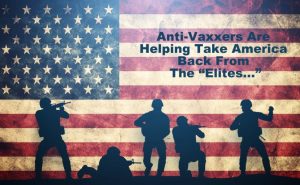 America Is The Agenda 21 “Elite’s” Number One Target…

And, They ALMOST Won…

Let’s put all of the cards on the table – Vaccines are the “Elite’s” primary tool used to modify people so as to accept the craziness of world government. Got that?

Most Americans have figured out that had we elected “Hillary” as President that, by now, most Americans, adults and children, would have been forcibly yanked out of their homes and/or vehicles, thrown on the ground, and vaccinated with the full compliment of CDC recommended vaccines (74 for children, 92 for adults).  She’d be using UN troops (probably Chinese) to get that done.

After all, the “elites” would surmise, “why not make the whole US population as dingy, and useless, as the over-vaccinated millennials?”

See the short, humorous, but very-true video below to see what I mean.

Frankly, You have to be “Over-Vaccinated” to accept the “Climate-Change” story as real…

…or the idea that “Open Borders” letting in millions, if not billions, of Planet Earth’s ignorant unwashed poor, to overload our system, is a good idea.

…or the idea that we should, like Europe did, let in ANGRY young Muslim males to the equivalent of 5.5% of our population (16,500,000) who will NEVER assimilate.

…or that we should give up our carefully designed and implemented electrical grid, and force everyone to have a wind turbine, chopping up birds, in their front yard.

…or that we should give up our coal, gas, and oil based system, grounding all airplanes, cars, trucks, trains, motorcycles, scooters, lawnmowers, chain saws, road graders, heating systems, you-name-it…

…or the idea that Americans should have their guns taken away from them..

(1)  They are dumbing down the US population.

(2)  The REALLY vaccine-damaged children are overloading the school systems and the parents.

(3)  The MODERATELY damaged young people need “Safe Spaces…” and CANNOT control their emotions WHEN SOMEONE ELSE HAS A DIFFERENT OPINION.

(4)  54% of America’s children have a chronic illness – causing massive costs to our health care system and individual families.

(5)  EVERYONE who gets any kind of vaccine develops health and/or mental problems.  No exceptions…

Vaccines are ONLY about population control…

The US Childhood Vaccine program was and is, a complete social experiment.  There are secret records of its success in what is called the Vaccine Safety Data Link.

BolenReport writer Janet Kerns PhD wrote about the effect of vaccines on the “millennial” generation, focusing on the mercury component…

In Janet’s writing she said:

A “snowflake” is a person who is considered to be overly sensitive or too easily offended. Millennials get “triggered”. According to the Slang Dictionary, the word “triggered” is used to describe someone who is angry and filled with hate. A person usually gets triggered after seeing something upsetting or alarming. Using the expression “triggered” is way to describe irritable people.

According to a 2013 article in Time magazine by Joel Stein, Millennials have characteristics that are different from other generations. Stein states that millennials lack the kind of empathy that allows them to feel concerned for others, but they also have trouble even intellectually understanding others’ points of view. According to Stein, Millennials are interacting all day but almost entirely through a screen. They are most often sitting next to one another and texting. They might look calm, he further describes, but they’re deeply anxious.

I sometimes joke about very serious things.  It is called “dark humor.”  Stay with me.  Here comes some of it.

It is OBVIOUS TO ME that almost all of  the Democrats in the US Congress, those FOCUSING on impeaching our President, and NOT even looking at legislation lowering the price of prescription drugs, or trade deals, GOT THEIR FLU SHOTS THIS YEAR, and probably their Pneumonia shot, HPV, Measles, DPT, Varicella, Zoster, and Hepatitus A & B.

We only have to look at a photo, or a video, of Adam Schiff to find validity in this argument.

And, if you have been following the Democratic Party Presidential Debates…

We’ve got Beto O’Rourke getting his flu shot…

Have I painted you a clear picture of what’s ACTUALLY happening?