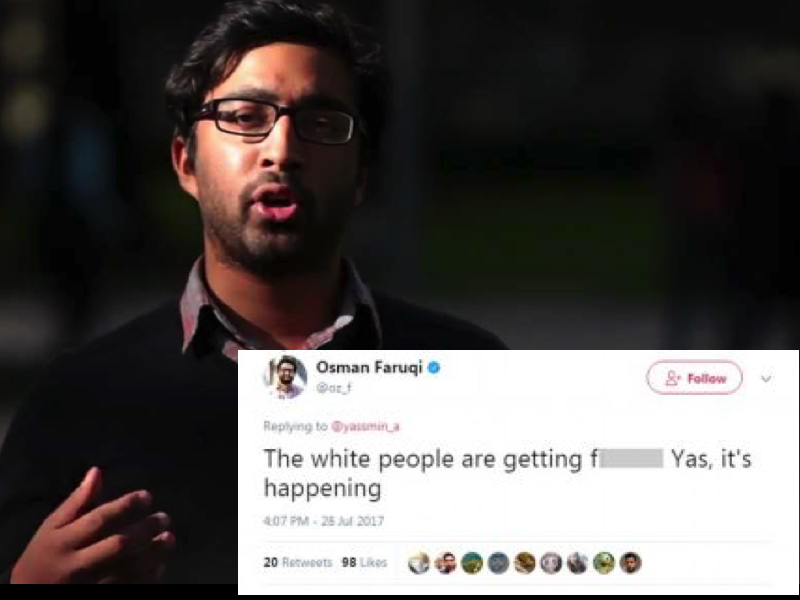 I know all about lawfare because Osman Faruqi started a defamation action against me in the Federal Court for comments I made about his anti-white comments.

Faruqi is notorious for denigrating white people for no other reason than they are white. Some of his appalling Twitter comments include:

The above comments by Faruqi are offensive enough, but then on the 27th July this year he had a Twitter exchange with Yasmin Abdel-Magied (you know the one: “Islam is the most feminist religion!”). She asked what was happening with Senators Scott Ludlam and Larissa Waters who resigned from the Senate for having dual citizenship. Faruqi replied with the tweet (note: we blanked this out, not Faruqi): 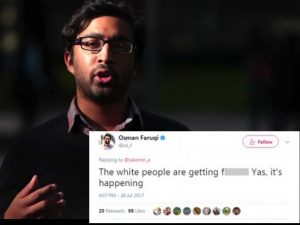 These comments above are outrageous and unacceptable.

So I condemned it on my program, Mark Latham’s Outsiders. That is what he is suing me over.

If he wanted to debate the issues I’d invite him onto my program. He can answer all the questions. He can have the last word.

But that’s not their tactic. Instead of debating an issue they would prefer to sue to try to destroy our free speech and send a warning to others.

Well, we’ve got to stand up against this!

We’ve set up a defence fund here, at www.StandWithLatham.com where you can support us and be provided with updates on the progress of the case. Please support our action to fight back against this.

We’re not going to be bullied by this guy!

Remember the section 18C case at Queensland University of Technology? Those innocent university students were persecuted by the Australian Human Rights Commission and Gillian Triggs.

Well, the guy who saved them in the courts is Tony Morris QC, a hero of free speech, and I’ve been very fortunate in being able to hire him for my case.

Hopefully, he can get the same result.

But hiring lawyers to fight against this left-wing Muslim with close associations with the Greens and fundraising organisations like GetUp, and supported by the left-wing, national law firm Maurice Blackburn, is not cheap.

We haven’t got the billion dollar budget of the ABC or the unlimited resources of a media magnate like Rupert Murdoch. All we’ve got is your support.

If you can give us your backing for our fighting fund please donate below.

We are due in court on Thursday, 16 November for an initial hearing to set down the steps that the parties need to take to prepare the matter for trial.

If we lose this case then it will be a powerful example to left-wing extremists throughout the country that litigation can be used to silence speech that they don’t like.

We are going to fight to ensure that this doesn’t happen.

Please help us fight for free speech and support us with whatever you can – $5, $10 or more if you can. It makes all the difference.

I really value any support you can give us in this very, very important fight!

P.S. If you prefer to contribute by cheque, please make it payable to “Rebel News Australia” and mail it to PO Box 409, Broadway, NSW 2007