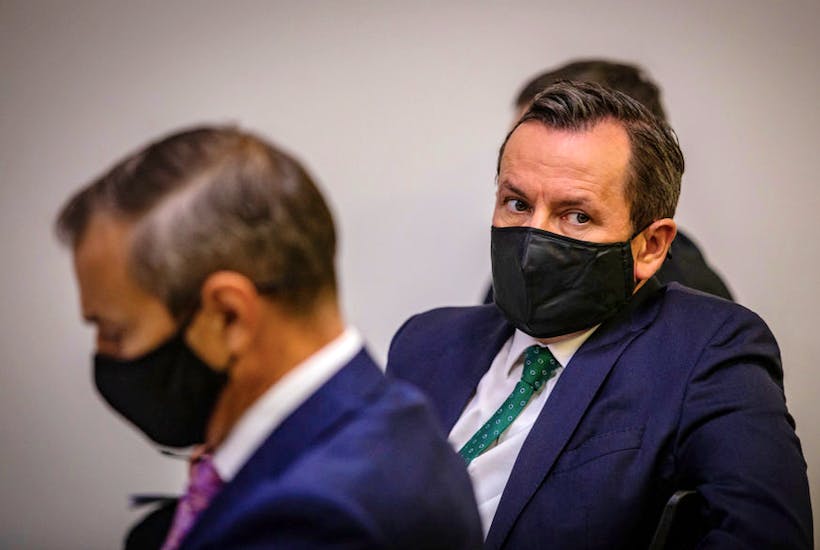 Living under the McGowan regime continues to be less than ideal. And as the rest of the country emerges from this pandemic and looks to the future, the grip on Western Australians remains tight and the narrative remains one couched in fear and cheap parochial politics. To make matters worse, WA, in its usually habitual apathy, is trailing the nation in the preparedness of its health system and in the progression its vaccine rollout.

In short, our hospitals are a shambles and our vaccine rollout is, frankly, inert.

To be clear, no one is suggesting the borders be flung open tomorrow and COVID19 be crop dusted over Perth. We just want a plan; a clear definitive plan so that people and business can start making their own plans to get on with their lives. On Friday, following pleas from the opposition, business and industry groups and some shaming on national television, McGowan delivered his woefully inadequate ‘safe transition plan’. This ‘plan’ will see WA set a date to reopen after it reaches 90% double dose of over 12s. It’s more a road to nowhere, and at best, it’s a plan to plan with the only reliable detail being the continued fecklessness of the WA government.

In short, it is to plans what the Lada is the automotive excellence; obscure, deficient and totally gutless.

Immediately before announcing this drivel, the McGowan government released WA Health modelling which showed that reopening at 90% would save over 200 lives and that opening at 80% would result in over 100,000 cases. That’s more than Victoria had over two years! It also fails to make allowance for therapeutics and assumes a static vaccination rate. And like most pandemic modelling, it’s a politically convenient form of junk math designed to scare rather than inform. It’s also totally at odds with the Doherty modelling which underpins the national plan and totally unlike any real-life example the world has seen to date.

Sadly, WA’s dismal vaccination rate together with this almost impossible target means the status quo will remain until sometime in 2022 assuming the target is, in fact, reached. In the meantime, families will continue to be separated, tourism will continue to be suffocated and industry will be unable to fill labour shortages. Conveniently, the plan has been fashioned to give the government absolution-in-advance and allow it to blame the people for not achieving the functionally unachievable. If the government wants to encourage vaccination, it should put on its big girl knickers and set a date to reopen. It’s remarkable how a deadline inspires action.

In short, it’s a failure of leadership to allow the tail to wag the dog because you don’t want to cash any of your political brownie points.

Then, on Sunday, McGowan announced he would go on a ‘reconnection tour’ to China, Japan and Korea to rekindle interest in WA tourism. What could be more tone-deaf than announcing a taxpayer-funded overseas junket while continuing to inflict suffering and separation on West Australians. We have limited domestic tourism due to border controls and testing requirements but somehow McGowan thinks international tourists will be desperate to come to WA, quarantine, and have a series of PCR tests before they can start sinking Margaret River reds. You’d think it would be prudent to focus on reuniting Australians and resuscitating domestic tourism rather than hobnobbing with political idols in the CCP.

In short, the room has changed and he can’t read it to save himself.

Yesterday, McGowan threw his toys out of the cot because the national media criticized his reopening plan. Admittedly, he is used to local WA media being an extension of his PR department, lauding and fawning every time ‘Dale dug a hole’. He could almost be excused for not realizing some journalists actually do their job and hold governments to account. In any event, it’s a level of criticism his glass jaw and stunning vanity can’t cope with. Some might consider his petulance astonishing but, in reality, the only astonishing thing is its consistency.

In short, McGowan forgets that he serves the people and not the other way round.

You don’t need to be any sort of fashionable ‘expert’ to work out that the WA government’s safe transition plan is the law of diminishing returns on steroids. It is based on the filmiest of reasoning, and ultimately, it will result in adverse consequences which will far outweigh any small incremental benefits. It is the culmination of everything that is feeble and self-indulgent about this government.

Bring on a High Court challenge.