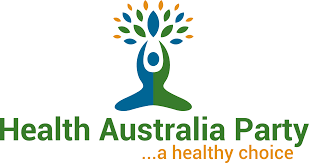 Poor little media weasel, Michael Koziol just can’t stand the fact that the Health Australia Party are kicking ass, especially in NSW. HAP have landed the coveted first column spot on the NSW Senate Ballet paper. This has been achieved through hard work & the need to push for real change at this years federal election. The general public, including myself are absolutely sick & tired of the big three political parties or OPPOSAMES.

If it were the Australian sex party in this top position then i’m sure that media weasel, Michael Koziol would not only be singing their praises but also, jumping out of his chair. The so called Australian media are as about exciting as wallpaper & this clown is a classic example of a worn out & dying media machine. We can clearly see when reading Koziol’s one sided & nasty hit piece that he is trying to label the HAP as evil Anti-Vaxers, which is a very predictable response.

In his nasty & vindictive little hit piece, Koziol the weasel writes, But its policy manifesto reveals a preoccupation with homoeopathy, home birthing and conspiracy theories about medical research. It supports parents who decline “invasive medical procedures [or] interventions” and calls for Australia to embrace a “different paradigm” in the treatment of chronic disease.

conspiracy theories about medical research? what media weasel, Michael Koziol is trying to say here is that the HAP want an open, transparent approach to bias & corrupt medical research along with wanting to overturn the Turnbull government’s, Draconian “no jab, no pay” policy. Koziol deems these kinds of policies as, Conspiracy Theories, how dare the HAP have members going for senate seats who are Homeopaths & against Fluoride in our drinking water.

The Hap have very clear guidelines as to what it is they want to achieve & have laid them out here in their policy fact sheet: https://www.healthaustraliaparty.com.au/index.php/policies/

The Science Skeptics have thrown a childish tantrum over the HAP party taking first column spot on the NSW Ballet Paper. The Science Party have put out a ridiculous & laughable attack piece called, An anti-science party could get elected by mistake, Help stop them. This is really incredible because the Science Skeptics are anti nature & the HAP are pro nature & pro health. These Science Skeptic clowns think they have all the keys to the mysteries of the universe & the science as they see it, is settled. The poor old Science Skeptics just simply cannot stand the fact that big changes are falling into place at a political level in this country. Science Skeptics seem to be heavily aligned with big Pharmaceutical Companies & this is not only extremely unfair for the people but will only lead to disaster if left unchecked. The ugly & discriminatory attack by our Government & so called media against our health freedoms has been nothing short of disgusting. The Science Skeptics claim to be skeptical about science related issues but act like a crazy religious cult when it comes to pushing vaccines onto the public but there is no real or credible science behind vaccinations.

Vaccines are not only completely useless but highly dangerous & can be potentially lethal for anyone who receives them. What possible use do dangerous & potentially deadly vaccines have in a modern & clean society like Australia? the only thing i can think of is that the vaccines themselves, although totally useless serve to make Billions in profits for Multinational drug empires. Science Skeptics with their connections in the Murdoch Media continually & blindly push dangerous vaccines but will never ever look at or accept the massive amount of damage they are causing to our children & the public at large. When it comes to adverse reactions, brain damage, Autism & death because of inoculations, the psychopathic vaccine pushers simply don’t want to know about it & selective memory falls into place.

I guess the Science skeptics & their shill trolls will have to beg for some more money from their big Pharma overlords in order to stay relevant. If the Australian people are going to take any advise from science skeptics, then we are not only going to slip into deeper trouble but we are going to lose more civil liberties & health freedoms. The Science Skeptics are nothing more than a hateful, anti family attack group who seem to be filled with Atheist psycho’s that aggressively push the big Pharma & LGBT agenda onto the gullible public.

For a better understanding of Science Skeptics & their army of vaccine pushing attack dogs, please read this fantastic article by, Ethan A. Huff over at Natural News titled, Science bloggers, ‘skeptics’ exposed as group of online terrorists whose weapons include intimidation, censorship and threats.

The HAP represent real change for our country, it’s people & our future so this has truly been a long time coming & a health party that wants to represent the people is a party that we all need to get behind, in mass. The Australian people are sick & tired of the main political party infighting with the Greens no longer being in touch with the general public so we could be looking at a massive change in the way people vote this year. I say, out with the greens along with the sex party & their skeptic trolls & in with an exciting new political force that will stick up for the common people & give us a voice in the chambers of power. I personally have nothing to do with the HAP & this article is made up of my own opinions but of course i totally support the HAP & will be voting accordingly.