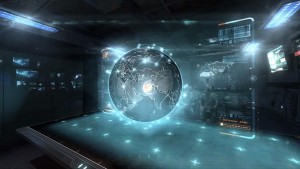 The original version of John Wheeler’s experiment proposed in 1978 involved light beams being bounced by mirrors. However, it was difficult to implement it and get any conclusive results due to the level of technological progress back then. Now, it became possible to successfully recreate the experiment by using helium atoms scattered by laser light.

Dr. Truscott’s team forced a hundred of helium atoms into a state of matter called Bose-Einstein condensate. After this, they ejected all the atoms until there was only one left.

Then, the researchers used a pair of laser beams to create a grating pattern, which would scatter an atom passing through it just like a solid grating scatters light. Thus, the atom would either act as a particle and pass through one arm or act as a wave and pass through both arms.

Thanks to a random number generator, a second grating was then randomly added in order to recombine the paths. This was done only after the atom had already passed the first grate.