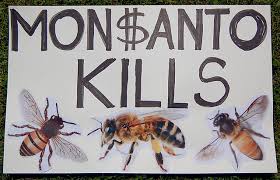 Ecologists refer to bees and a few other select organisms as keystone species. This term is analogous to the keystone of an arch. Remove the wedge-shaped stone at the top, and the entire structure collapses.

Bees are a keystone species because they are the world’s primary pollinators and are therefore crucial to the environment. While Monsanto claims bees only pollinate about a third of the world’s crops, others estimate their contribution to be closer to 90%. But the startling decline of the bee population isn’t just threatening our crops, it is also threatening varied and diverse wild plants across the globe that provide food for countless animal species. If we lose the bees, the loss to our ecosystems will be catastrophic.

Colony collapse disorder is a term for deserted hives. Adult bees vacate the hive, leaving behind the queen and immature bees. The adult bees simply vanish.

The Department of Agriculture cites several possible causes for colony collapse that include parasites, viruses, predators, nutritional deficits, and pesticide poisoning. They hypothesize a probable combination of factors while reminding us that bee disappearances have been recorded as far back as the 1880s.

While we must recognize multiple factors are in play, there is no denying the fact that bees are very sensitive to pesticides, making them more susceptible to disease and interfering with their navigation. Even when exposed to sub-lethal doses of pesticides, many bees simply get lost. Unable to find their way back to the colony, they die, lost and alone. It’s not just pesticides sprayed on crops that are killing the bees, the pesticides built into genetically modified crops are killing kill them as well.

Earthjustice reports a dramatic example with bumblebees that occurred in June of 2013.

On a fine June morning last year at a Target store outside Portland, Oregon, customers arrive to a startling sight: the parking lot was covered with a seething mat of bumblebees, some staggering around, most already dead, more raining down from above. The die-off lasted several days.

It didn’t take long to figure out that the day before a pest-control company had sprayed a powerful insecticide on surrounding Linden trees to protect them from aphids; but nobody warned the bees to stay away. In the end, an estimated 50,000 bumblebees perished.

The tragedy at Target wiped out as many as 300 bumblebee colonies of bees no longer available to pollinate nearby trees and flowers.

For years Monsanto has masqueraded as an eco-friendly biotech company that is concerned about our dying bees.

Part of our commitment to preserving the environment includes protecting the health of honey bees. That’s why we work with many groups to develop sustainable solutions for the complex issues facing honey bee health. –Monsanto’s Website

The EPA gave Monsanto, a Fortune 500 company, a $3 million dollar grant, taxpayers’ money, to develop a solution for colony collapse disorder. A top scientist at Monsanto, John Leere, let the cat out of the bag when he admitted GE farming and bees can’t coexist. So guess which one they consider expendable? The following quotes are from the World New Daily Report.

Latest studies have found a link between neonicotinoid pesticides that are vastly used in GE corn crops. As GE farming has become an essential part of agriculture in today’s modern world, we had to develop ways to promote both the continuity of GE farming and the survival of the honey bees, a fascinating challenge?

Since GE farming and neonicotinoid pesticides are here to stay, we first tried to modify the bees as to increase their immune system to these insecticides, with little or no success.

Instead of saving bees, Monsanto intends to replace them and to profit from their demise.

Yet, we did not despair and eventually started testing on winged virgin queens and males of the ant species. Although ants usually lose their wings after the queen has been inseminated and starts to give birth to the new colony, genetic manipulation has produced a flying ant species that is strikingly similar to the common honey bee, and 50 times stronger to certain types of pesticides.

Through genetic manipulations, we could eventually create a hybrid species that would have both the common honey bee’s pollinating characteristics, as well as possess the pesticide immunization properties of certain ant species, a perfect match that would take thousands of years to develop on its own in nature.