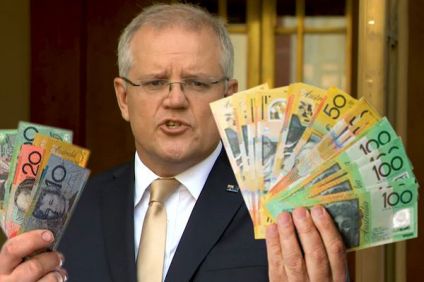 SCOTT Morrison has repeatedly shown one thing – he’s a showman. He’s currently popping up around the country like a jack-in-a-box telling everyone what a wonderful job the Coalition is doing getting the country back working.

But while ShowMo is beating his be-happy political drum he gives mere lip service to the evil and unlawful scheme of the states to force unvaccinated people out of jobs because of so-called vaccine mandates.

Morrison could force the issue into the High Court of Australia by supporting Pauline Hanson’s Bill outlawing the mandate that is wrong and unlawful at so many levels. Under Section 109 of the Constitution the Hanson bill would nullify state actions inconsistent with that.

Senator Hanson has threatened to disrupt Morrison’s legislative agenda including the new religious freedom laws and reforms to demand voters provide ID when they vote. She called out Scomo’s duplicity. “He says there should be no vaccine mandates – then do something about it.”

And now the grinning Scomo perpetrates the ultimate slap in the face to the thousands of skilled Aussie workers losing their jobs – he’s opening the gates to thousands more skilled workers from overseas from December 1. Officially, the borders are now open to more than 200,000 international travelers planning to study, work or migrate “to boost Australia’s economy after the Covid pandemic” because the country’s vaccination rate allegedly hit 85 per cent on Sunday.

According to a report in The Australian “the federal government’s immigration strategy will prioritise ‘skilled workers’ as the nation struggles to plug gaps in the labour market”. And how big are these “gaps” in the labor market with thousands of workers across the country losing their jobs? Tell us Scotty.

“As our recovery gathers pace, businesses around the country are increasingly in need of skilled workers, whether they be in hospitality, mining, construction, or professional services,” Morrison told the newspaper.

“In meetings last week with businesses representing almost every sector of the economy, the most pressing issue raised was workforce shortages and the need to reopen our borders, allowing skilled migration to recommence,” he said. So again Scotty, in case you didn’t hear the first time, what is the major factor leaving thousands of vacancies at hospitals, aged care facilities, schools, and businesses in general?

If there is an ounce of decency left in Morrison and his Cabinet ministers, they will act right now to stop the state-run mandates. What’s stopping him? Could it be the extortionate conditions he agreed to under the vaccine purchases? Could it be orders from the Global Preparedness Management Board, the WHO and others who inhabit the global medical cabal.