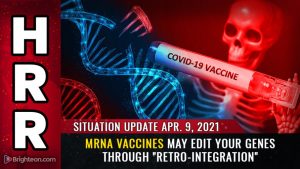 With each passing day, it’s becoming increasingly obvious that mRNA vaccines are a death weapon against humanity. Now, we’re learning that mRNA vaccines may pose a threat to the viability of the human species thanks to the fact that a mechanisms exists whereby mRNA sequences can be transformed into DNA and inserted into your human genome.

This means there is a possibility that mRNA vaccines might turn you into a “genetically engineered” organism, with potentially catastrophic consequences for your own health as well as impacting fertility and future generations.

It is technically possible that mRNA vaccines may cause widespread infertility, birth defects or horrific deaths by altering human DNA.

The problem is that nobody knows for sure how many people might be impacted in this way because no long-term safety trials have been conducted.

Thus, people taking the vaccine right now are unwittingly taking part in a global vaccine experiment that may alter their own genes and remove them from the human gene pool.

In effect, mRNA vaccines might be the most powerful vector of so-called “natural selection” we’ve ever seen, wherever people remove themselves from the gene pool by rendering their own reproductive capabilities non-functional.

This is all covered in great detail at the Children’s Health Defense website.

That’s the focus of today’s Situation Update podcast, along with a lot of other commentary, including shocking new information about a black book author who is promoting a prayer to “hate white people.”

The new “tolerance,” it seems, is to beg God to hate white people. “Hatred” is the new progressivism.

Also, tech companies are throwing billions of dollars into startups that will harvest the blood of children and then transfuse it into the bodies of paying clients.

Soon, it seems, harvesting the blood of children will become an FDA-approved business model. America is becoming a “vampire” society run by child traffickers, medical vampires and vaccine zombies.

Get full details on all this and more in today’s Situation Update: