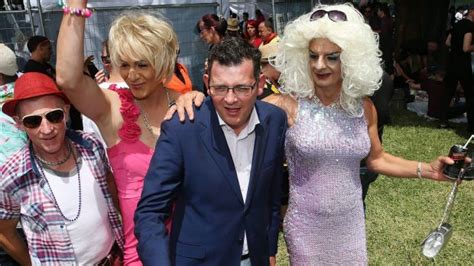 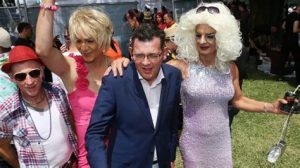 Victorian premier Daniel Andrews with some of his buddies

READ MORE AT THE AUSTRALIAN

Public sector bosses will have to work towards gender equality targets set with a new state government commissioner or face being sent to court, under legislation to be introduced in the Victorian parliament by the Andrews government today.

The legislation will see the establishment of a public sector gender equality commissioner, who will work with departments and agencies to develop a range of targets around issues such as equal pay, sexual harassment and career progression practices.

It will cover all public sector bodies with 50 or more employees, taking in approximately 300 entities and applying to about 380,000 Victorian workers.

Minister for Women Gabrielle Williams said bodies would be required to report on their progress every two years, and develop four year plans in collaboration with the commissioner.

“We’re doing this because there is a persistent gender pay gap issue across our nation, but in the VPS here in Victoria it sits at about 11 per cent,” Ms Williams said.

“We are well aware, and I think it’s well understood across the board, that change has been too slow, and so this legislation is a really important part of us being able to lead by example as a government, and demonstrate what can be done when a concerted effort is made to improve the engagement of women in the workforce and improve outcomes for the whole community as a result.”

“The gender equality commissioner will work with those entities to on the basis of baseline data and research to work out what is the most appropriate target for them looking at the four years ahead, noting of course that they have to report back every two years,” she said.

A Victorian Human Rights Commission report made public last year — despite the United Firefighters Union taking court action to prevent it being made public — revealed “everyday sexism” and a “hyper-masculine culture” within the Metropolitan Fire Brigade.

Asked whether the new measures would crack down on sexism within workplaces such as the MFB, despite the UFU’s close relationship with the Andrews government, Ms Williams said she was “certainly aware that everybody across every government body, every public sector body, indeed most workplaces around our country have an issue with gender equality within their workplaces, and the fire services are no exception.”

Ms Williams said the bill aimed to take a supportive and collaborative approach to establishing targets, with some sanctions in place if they are not met.

“Essentially what is available to the commissioner is a set of compliance measures that range from say mediation and conciliation at the lowest end to compliance orders which could be enforced through VCAT at the most severe end, but we expect that in most cases it won’t get to that,” she said.

“My understanding is where a body has demonstrated a systemic, persistent breach, at its more severe end the commissioner might be able to issue a compliance order.

“If that is again not adhered to they can apply to VCAT for that to be made effectively an enforceable order, which gives it a little bit more teeth, obviously, and should it escalate further from there, if they again breached a VCAT order, it would be subject to all the usual civil options available through the courts.

“This isn’t about setting unachievable targets or setting these organisations up to fail. That’s not what we want to do.

“What we want to do is drive meaningful and real outcomes and work with these bodies to ensure that not only are they setting targets that are achievable and realistic given their context, understanding that across those 300 entities the starting point is very, very different from entity to entity, but also supports them in terms of the implementation of measures that can proactively and meaningfully drive up their levels of, for example, female representation throughout an organisation, not just at low levels or low paid levels of an organisation.”

Ms Williams said Assistant Treasurer Robin Scott was working on funding and procurement guidelines with further announcements to come regarding how that may affect gender equality targets for private companies providing government services.

“Gender equality is a fundamental of the Victorian public service standards, and that’s simply being, I think, emphasised by the government again.”