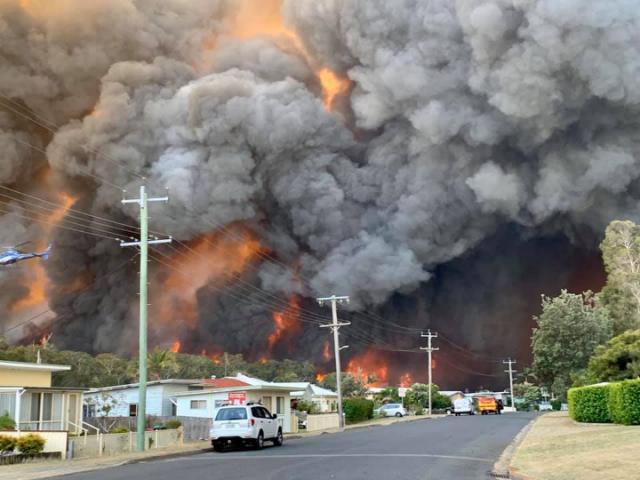 Thousands of residents have taken refuge at evacuation centres on NSW’s mid-north coast while scores of others have chosen to stare down “massive walls of glowing smoke” as they attempted to protect their homes.

Emergency warnings were in place for fires at Hillville south of Taree and nearby Crowdy Bay National Park on Saturday evening with the local mayor describing the firestorm as “a disaster of magnificent proportions”.

Mayor David West cried as he spoke to worried residents – including parents, children and grandchildren – in a local evacuation centre.

“To go into a room of a couple of hundred of people and talk to them, I’m sorry, I broke down and cried, you feel so helpless,” Mr West told AAP.

“You see tears in their eyes, you see the sense of hopelessness, knowing they’ve probably lost everything they own. It’s such an incredible, emotional time.”

The retired policeman – who lives in Brimbin – said the fire was “a disaster of magnificent proportions”.

The mayor praised fire crews who were “risking their lives” to protect people and property.

Mr West’s deputy, Claire Pontin, says a change in the wind direction saw the fire danger move from her area towards Wallabi Point and Old Bar near the coast.

While some of her friends evacuated, others decided to stay and keep working with hoses to fend off the approaching fire, the Hallidays Point resident said.

One of her friends had posted a picture online that showed “massive walls of glowing smoke up in the air approaching them”.

“There are houses on the outskirts that are burning and the wind is so strong that it’s blowing embers ahead of the fire front and you’re getting spot fires all over the place.”

While she is concerned for her friends the deputy mayor said she had great faith in the “amazing” skills of firefighters.

The Hillville blaze had ripped through 13,000 hectares by Saturday evening while the Crowdy Bay blaze had destroyed 10,500 hectares.