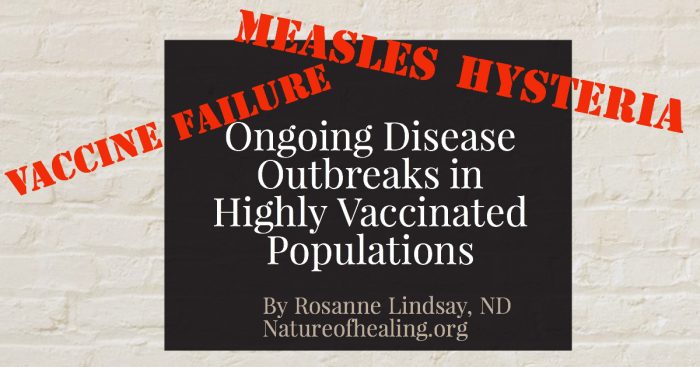 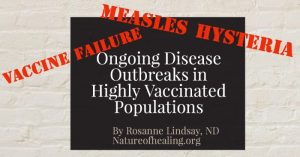 When an outbreak of influenza A (H3N2) occurred aboard a U.S. Navy ship in February of 1996, despite 95% of the crew’s having been appropriately vaccinated, it barely made the press, even though the CDC did quietly admit that the vaccine failed to work. Why wouldn’t the CDC want more people to know that the vaccine failed? Wouldn’t the President be concerned that US naval defenses might suffer if their very bodies were under attack? Wouldn’t the sailors feel duped being infected with the very viruses they were told the vaccines would preven

What if more people understood that infectious diseases are not to be feared because they are a natural phenomenon that are cyclical in nature? What if people knew about ongoing disease outbreaks in highly vaccinated populations, from nursing homes, to schools, to the National Hockey League?

A Right Of Passage

In Nature, cyclical means that whatever comes around, goes around, whether it is every day, like the sun, or every few years like endemic infections. Endemic means that something is maintained at a baseline level, such as chickenpox. Eradication of cyclical diseases, such as measles or influenza, by means of vaccination, is a pipe dream. Rather than preventing disease, vaccines prevent the disease from ever being resolved. This is because vaccines inhibit T-cell response which is central to natural immunity. Down-regulating T-cells is the purpose of the vaccine program. This is the mentality that tells a new mother not to breastfeed her baby so the vaccine will work. It is sabotage of human nature, perpetrated by those who write the rules–the Centers for Disease Control and Prevention (CDC)–as well as those who publish the approved science–the Journal of the American Medical Association (JAMA).

In a 2013 report on the prevaccine era, the CDC stated: Before implementation of the national measles vaccination program in 1963, measles occurred in epidemic cycles and virtually every person acquired measles before adulthood (an estimated 3 to 4 million persons acquired measles each year). When individuals naturally contract infections they develop life-long immunity to the disease. This shows that childhood infections are vital to building innate immunity. Science also shows that these harmless infections do more than confer immunity and prevent future infection. Naturally acquiring measles and mumps is associated with lower risk for cardiovascular disease, as well as cancers later in life. Why not make this headline news: Get infected? Get protected!  Because the vaccine market is expected to rise from $50 billion in 2018 to $60 billion by 2020.

When enough people contract an infection naturally, the whole population benefits. This is the true definition of “herd immunity.” Herd immunity is a Right of Passage that elevates the natural defenses of whole communities. It is humanity’s border security at the level of the cell. As recently as fifty years ago, doctors recommended rest and fluids for children who contracted measles. They knew that the beginning of measles season was late Fall going into Winter and dropping off in Spring. Doctors advised in the press: “Everybody gets the measles during the epidemic so they become immune.” Boredom from rest was the only negative side-effect.

Today, as numerous infectious disease outbreaks continue in highly vaccinated populations, how does the CDC respond?  They use the media to spread fear of an invisible virus as if it were the enemy. “CDC monitoring measles cases in 21 states, including North Carolina” They compare numbers of cases to the previous year–an arbitrary comparison. What they fail to disclose are the hundreds of outbreaks over the last decades in highly vaccinated populations. Here is a sampling of some they have swept under the rug:

Outbreaks do not discriminate by age or sex or by year. But they are more prevalent, with more serious side effects, among those who are vaccinated. Vaccines are the limiting factor in the spread of disease. According to the National Vaccine Information Center, as of March 31, 2018, there have been more than 89,355 reports of measles vaccine reactions, hospitalizations, injuries and deaths following measles vaccinations made to the federal Vaccine Adverse Events Reporting System (VAERS), including 445 related deaths, 6,196 hospitalizations, and 1,657 related disabilities. Over 60% of those adverse events occurred in children three years old and under.

Researchers admit outbreaks are due to airborne measles transmission and inadequate immunity from vaccinations at younger ages. Measles transmission in vaccinated populations is NOT due to a few unvaccinated individuals. Instead, transmission is due to the shedding of virus, as disclosed on the package insert. Moreover, when the “herd” is vaccinated, they lose their natural defenses and become more susceptible to illness. The natural state of the herd becomes sickness, not health.

Continuing outbreaks and vaccine failures would suggest that vaccines do not work based on flawed science, and ignorance. In the name of “health and safety,” government officials have long used their standing to convince the masses to inject known toxins into their bodies, such as mercury, aluminum, phenol, formaldehyde, aborted fetal tissue cells, animal cancer cells, among other nasties.  Therefore, it is time, again, to call out false theories and return to the human right of passage. For ten things you can do to stop the infectious spread of FEAR at its source, see my 2015 article and reclaim responsibility for your health.

Vaccine science ignores Nature. Not only that, it goes against Nature. Trying to stop the natural cycle of infection in a population is like trying to stop the seasons. The CDC cannot resist Nature, no matter how many vaccines are patented or how much money is made. Nature always finds a way to breakthrough. Reflect before you inject.

Rosanne Lindsay is a writer and Naturopath under the Turtle Island Provider Network. She is President of the National Health Freedom Coalition and co-administers Wisconsin for Vaccine Choice. She is author of two books, including her latest book based on her own story of thyroid disease reversal: Free Your Voice, Heal Your Thyroid, Reverse Thyroid Disease Naturally. Find her on Facebook at Rosanne Lindsay and Natureofhealing. Consult with her (Skype or Zoom consults available) at natureofhealing.org. Subscribe to her blog at http://www.natureofhealing.org/blog/, where this article first appeared.