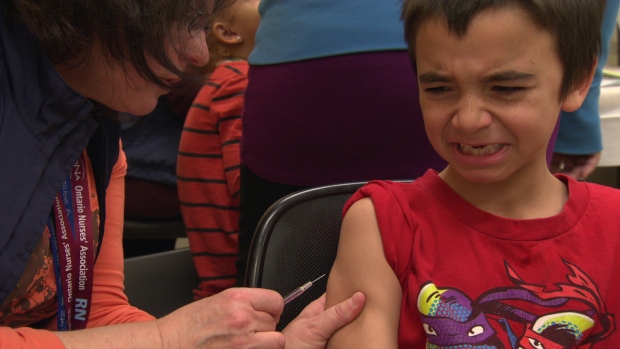 About 900 elementary students with the Ottawa Catholic School Board will not be allowed back to school tomorrow unless Ottawa Public Health receives proof that the children are up to date on their immunizations, the agency announced Tuesday.

The 20-day suspensions can be issued by Ottawa Public Health under the authority of the Immunization of School Pupils Act.

This year, the agency began reviewing tens of thousands of out-of-date student immunization records. It sent out about 35,000 letters to parents asking them to update those records earlier in the school year.

Once parents receive a letter like that, they have a month to provide the information and if they don’t, Ottawa Public Health issues a “notice of suspension” letter indicating when the student will not be allowed back to school.

Suspensions limited to Catholic board, for now

Ottawa Public Health has not yet suspended any students in the Ottawa-Carleton District School Board, as the agency says it is staggering the notices.

Kayden Slack gets immunized at a ‘catch-up’ clinic organized by Ottawa Public Health. Without an updated vaccination record, he faced suspension from school. (CBC)

Earlier this month, the agency offered ‘catch-up’ immunization clinics. Families in the east-end and west-end of Ottawa can still book an appointment at one of the clinics by calling 613-580-6744.

Any families who want to opt out of immunization for philosophical/religious or medical reasons need to contact Ottawa Public Health directly.