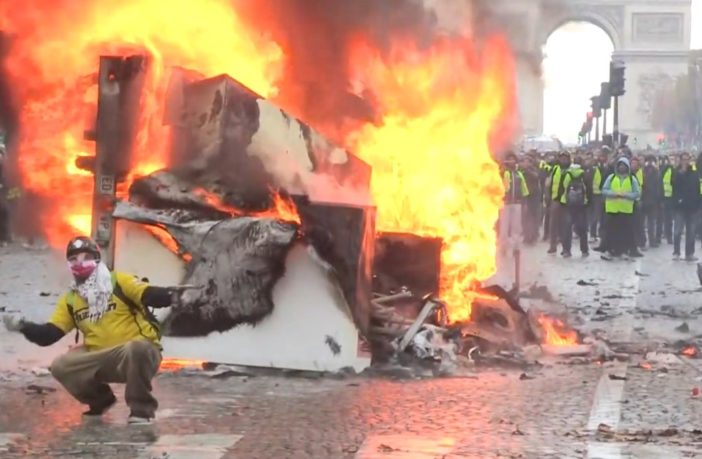 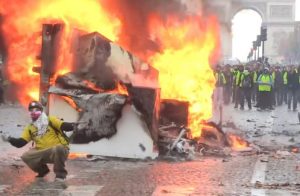 A second weekend of protests against President Macron’s rising taxes in Paris were met with teargas dispersed using a water canon on Saturday.

There is no indication of the protests ending, in fact, they had already spread to Belgium. The protesters descended upon the famed Champs-Elysées avenue where police were deployed to prevent them from reaching the Elysée presidential palace.

The protests have lasted more than a week, protesters wearing the fluorescent yellow or ‘Hi Vis’ jackets that are compulsory for all motorists in France to have in their cars.

They’ve blocked highways across France (and Belgium) with barricades and convoys of slow lorries obstructing access to fuel depots, shopping centres and factories.

Protesters sang the national anthem and carried signs calling for the resignation of President Emanuel Macron as they are opposed to the taxes Macron’s government has imposed on diesel, the most commonly used fuel in France by far, claimed to be part of an effort to fight climate change.

The protests are problematic for Macron, who tries to position himself as a champion against climate change. City officials have said that around 3,000 police officers in Paris were deployed on Saturday.

Besides the ‘yellow vest’ protests, there was a demonstration against violence towards women and a football rugby match all scheduled for Saturday.

More than 36,000 people said on Facebook that they would attend a protest at the capital’s Place de la Concorde. According to France’s Interior Ministry, two have died and 606 have been injured in the protests.