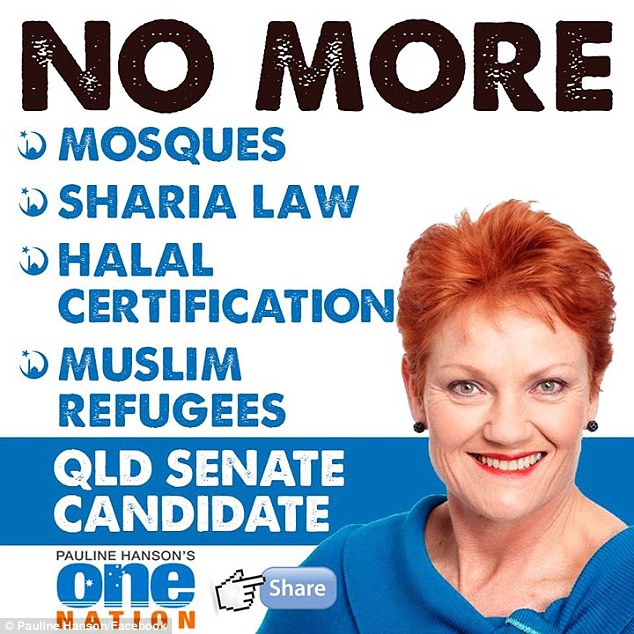 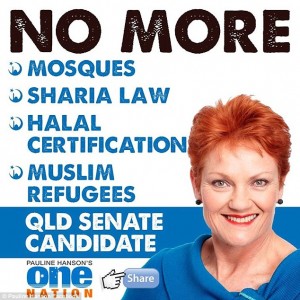 In the wake of last Friday’s fatal terror attack in Sydney‘s west and subsequent raids controversial politician Pauline Hanson has declared she will seek to stop mosques, Sharila law and Muslim refugees, if elected at the next Federal poll.

The One Nation party leader has already won significant support within a day of posting her hard-hitting manifesto to followers: ‘No More: Mosques, Sharia law, Halal certification, Muslim refugees’.

The Queensland Senate candidate placed the message on Facebook and it has been ‘liked’ by more than 16,000 people in just over 24 hours.

A vote for me at the next Federal Election will be your insurance, the major parties will have absolute opposition to any more Mosques, Sharia Law, Halal Certification & Muslim Refugees. NO MORE!’

She told Daily Mail Australia on Wednesday that it’s a similar message to what she is hearing people on the streets.

Ms Hanson said it was not just the killing of Curtis Cheng in Parramatta which sparked her slogan.

‘There’s been quite a few, including the stabbing (last year) of the police officers (by Melbourne teenager Numan Haider) and I cannot see the government doing anything to eradicate it,’ she added.

One thought on “Pauline Hanson: ‘No more mosques, Sharia law or Muslim refugees’:”