Pedophiles are attempting to rebrand themselves as MAPs or “Minor Attracted Persons” in an attempt to gain public acceptance, Gay Star News reports*. Groups have even gone so far as to create their own rainbow Pride flag.

According to the UK-based LGBTQ news website, the group behind the rebranding efforts is attempting to destigmatise pedophilia by presenting themselves as a marginalized and misunderstood community. 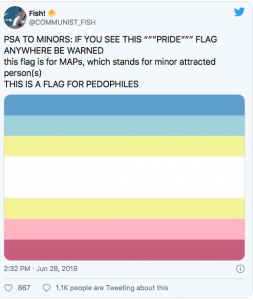 Sites like The Prevention Project have also reportedly started sharing testimonials from pedophiles suffering from suicidal thoughts and online bullying.

One testimonial claims, “The bullies were primarily people who claimed, based on their religious beliefs, that John was going to hell and deserved to die.

“They described how they would kill him on his twitter page and people supported their hate.

“Desperate for help, John sought treatment for his shame, depression, and suicidality. Although he was scared to share about himself with a stranger, he felt desperate for help as he had NO desire to harm anyone, ever.

“Once he shared about his attraction to children, his therapist told him, “I don’t treat sex offenders.’”

Last month TEDx hosted a talked by Mirjam Heine from the University of Würzburg, in which she argued, that pedophilia is a natural sexual orientation, just like heterosexuality.

“We should accept that pedophiles are people who have not chosen their sexuality,” Ms Heine claimed. “We should accept that pedophilia is a sexual preference, a thought, a feeling, and not an act. We should differentiate between child sexual abuse and pedophilia. We shouldn’t increase the suffering of pedophiles by excluding them, by blaming and mocking them.”