Giving an evil and psychopathic tyrant more power is a fantastic idea.

Premier Daniel Andrews could be given more power to declare pandemics and enforce emergency laws under legislation set to replace Victoria’s current state of emergency framework.

The Public Health and Wellbeing (Pandemic Management) Bill, set to be introduced in the lower house when parliament resumes on Tuesday, would allow Mr Andrews to make a pandemic declaration after discussing with the Chief Health Officer and extend it “three months at a time, with no outer limit on the total duration of declaration”.

The government will be able to limit movement of the population, ban gatherings, shut down businesses and enforce quarantine if needed.

Minister for Health Martin Foley, will be able to sign off on public health orders rather than the Chief Health Officer, currently Professor Brett Sutton, giving the him “broader power” to make orders to protect public health.

Say NO to permanent pandemic legislation: What you can do IMMEDIATELY to protect Victoria’s rights 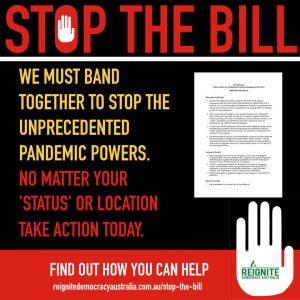 Current legislation gives Prof Sutton power to provide advice to Mr Foley to force a state of emergency provided there was a serious risk to public health.

The bill states public health advice will need to be taken to parliament to provide the public with an opportunity to understand the reasons behind the move.

It also outlines the ability to apply pandemic orders to “classes of person” who can be identified by “their characteristics, attributes or circumstances”.

Victoria has been subject to controversial emergency laws since the beginning of the pandemic where the government was able to limit movement of the population, implement hotel quarantine and the wearing of face masks.

“The bill establishes several mechanisms designed to improve the transparency of pandemic decision-making and accountability of decision-makers to parliament and the community,” a summary of the bill reads.

The bill is expected to pass in the lower house where there is a Labor majority but will need support from three of the 11 crossbenchers in the upper house.

Opposition leader Matthew Guy is fiercely against the bill.

He described it as a “massive threat to an Australian democracy”.

“This Bill is very dangerous overreach, placing all power – all power – in the Premier, with no oversight,” he wrote on Twitter on Monday night.

“It must be opposed”. 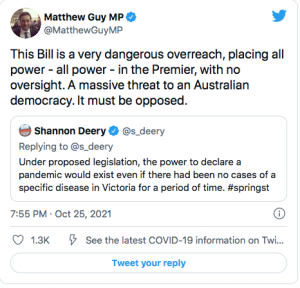 On Tuesday morning, Mr Guy said: “No government would need laws as extreme as this unless they planned to lock us down all over again”.

If it is successfully passed in parliament it will replace the current state of emergency when it expires on December 15.

Unvaccinated MPs will be banned from entering parliament on Tuesday if they refuse to reveal their vaccination status.