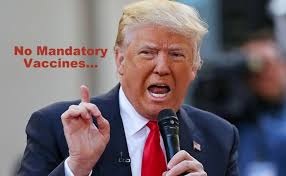 That’s the only conclusion I can come to after reading a recent article in Yahoo News, (Religious Discrimination Lawsuit Claims Mandatory Flu Shot Caused “Severe Emotion Distress,” by Erin Donnelly, March 7, 2016), about the case brought by the newly formed Conscience and Religious Freedom Division of Health and Human Services.

From the opening paragraph: “The Department of Justice has filed a lawsuit charging that a Wisconsin nursing home’s insistence that all employees get annual flu vaccinations amounted to religious discrimination and a violation of the Civil Rights Act of 1964.”

The case was brought on behalf of nursing assistant, Barnell Williams who was “told in the fall of 2016 that she would lose her job at the county-owned Lasata Care Center if she did not get vaccinated.”

Trump’s Justice Department is putting us on the same legal footing as the Freedom Riders of the 1960s who protested against segregation.  How sweet it that?????

The facts of the case are truly amazing.  The reasoning under which this case was brought can easily be turned to SMASHING CHILDHOOD VACCINE MANDATES!

From the article: “The nursing home in Ozaukee County, did provide an exemption for employees citing religious issues, saying they could wear protective masks in lieu of getting a flu shot.  Williams, however, did not meet the criteria because, according to the legal filing, she could not provide a letter from a clergy member testifying to her faith as ‘she had no affiliation with any church or organized religion.’  Williams explained her circumstances and shared that ‘her interpretation of the Bible prohibited her from putting certain foreign substances, including vaccinations, in her body because it was a Holy Temple.”

“Williams claims that her requests to submit alternatives to the clergy letter, such as testimony from family members, were denied.  Fearful of losing her job, she got the flu shot, but was ’emotionally distraught’ by the situation.”

The western world is based on the idea that the conscience of an individual in inviolable, and that any exceptions must be based on the threat of imminent harm.  The lies of Big Pharma are one issue, but conscience is another.

All freedom-loving people can agree that the protection of an individual’s conscience is something the GOVERNMENT MUST PROTECT.

Otherwise, the government has no valid reason for existing and it a tyranny which much be resisted.
Which is why you need to make your comments to the proposed federal regulations on Conscience and Religious Freedom, letting them know that YOU want the rights of ALL PEOPLE to choose whether they want a vaccine, with NO COMPULSION for either employment or education.

This is what I propose again that our community try to get at least 5,000 comments by March 27, 2018 on the proposed regulations regarding Conscience and Religious Freedom in Health-Care.  Here’s what YOU NEED TO DO:

4.  Insert your PUBLIC COMMENT, “Expand the Categories to include parents, adults, children, caregivers, legal guardians, and employees to file complaints regarding vaccine situations.”

5.  Add your information, your organization or USHealthConsortium.org

5.  Click the SUBMIT button on your form.  Thank you for helping to make a difference!

6.  You can also go to the USHealthConsortium.org website – under TAKE ACTION, file your own individual complaint (see CRF Division’s SPECIAL INSTRUCTIONS for filing vaccine situations).

I thank you my dear brothers and sisters in this struggle for taking the time to submit your comment.  I genuinely believe we are now DRIVING the conversation.

If we keep up the pressure our enemies will soon be fleeing on the figurative HIGHWAY OF DEATH as we liberate our children from their malign influence and protect the next generation of American children.

Kent’s book PLAGUE was released by Skyhorse Publishing in 2014 and is now available in paperback.  Skyhorse also publishes the work of Mo Yan, the 2012 recipient of the Nobel Prize in literature.