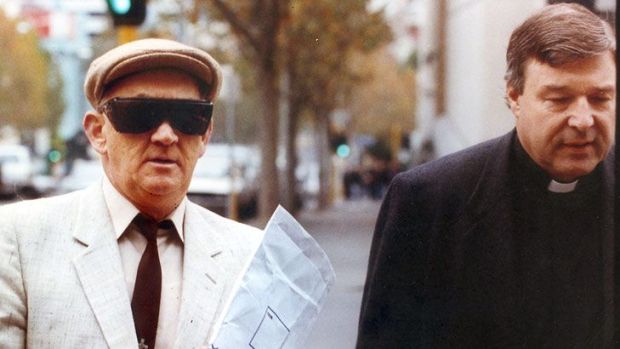 The federal Child Abuse Royal Commission is a farce. It was implemented to gather information, cover up any evidence of Australia’s massive, integrated pedophile network, and to give the public a false sense of security that something is being done to remedy the epidemic of pedophilia. I can prove the Royal Commission is corrupt, with the following single example:

Gerard Ridsdale is Australia’s most notorious pedophile priest. He has been convicted of raping over 60 kids so far (a fraction of his estimated victim total), including raping a girl on a church altar. The girl’s own father delivered her naked to the altar for Ridsdale to rape (an act which reeks of satanic ritual abuse).

Gail Furness questioned Gerard Ridsdale about his violent rape of a 10/11-year-old girl in the St Alipius Presbytery kitchen, which George Pell witnessed. A newspaper article accurately reported the facts of the crime as follows:

A PRIEST [George Pell] who allegedly witnessed predatory pedophile Gerald Ridsdale raping a young girl 40 years ago has been slammed by a judge, but the clergyman’s identity has been withheld from the public.

Ridsdale pleaded guilty on March 18 to the rape of the girl, then 10 or 11, at St Alipius presbytery, Ballarat, in 1972 or ’73. A summary of the court plea details: ‘In around 1972 or 1973 when (the victim) was aged 10 or 11 she was cutting up vegetables in the presbytery kitchen at the St Alipius Primary School. Ridsdale came in and said he had lots of shiny rocks to show her. (The victim) remembers this was around the time of the VFL football grand final.’

The court heard that Ridsdale then took her into his room, and showed her adult magazines, and she ran back into the kitchen. When she ran he chased her, grabbed her, told her to bend over and then raped her. A summary said: ‘(She) believes that another priest [George Pell] living at the house at the time walked through the door to the hallway and exited out the back door as this occurred. She knows that this priest saw what was happening.’

Gail Furness misrepresented the content of the victim’s police witness statement, and the facts of the case, while questioning Gerald Ridsdale, by putting the following two blatant lies to Ridsdale:

Gerald Ridsdale was charged, convicted and sentenced based on these facts:

So, Gail Furness moved the location of the rape from a public to a private location. Why? If the rape occurred in a public place, this suggests every priest in the presbytery was comfortable with pedophilia; and the only people comfortable with pedophilia – are pedophiles. Indeed, it later emerged that Cardinal George Pell was the priest who witnessed a young girl being raped in the kitchen by Ridsdale, and that George Pell himself was a rampant pedophile.

The Australian government paid Gail Furness $5 million for her services to the Royal Commission.

The main thing the Vatican and the Royal Commission are hiding in this case is – the pedophile priests used their child rape victims to procure more child victims from the school playground and elsewhere, and lure them to the presbytery to be raped. The presbytery was basically operating as a child brothel.