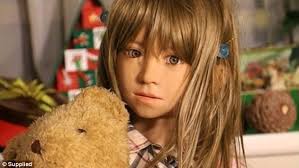 Child-like sex dolls will be banned in South Australia after the State Government agreed to back new legislation, with an independent MP now preparing to write to Japanese authorities urging them to crack down on manufacturing the items.

Under the reforms introduced by SA Best MP Connie Bonaros, anyone guilty of producing, selling or possessing the objects, which resemble young children, will face jail terms of up to 10 years.

The legislation unanimously passed SA Parliament’s Upper House with State Government support, and will go before the Lower House this week before coming into effect later this year or early next year.

“There have been instances where these sorts of dolls have been found in South Australia, but our laws have not been able to respond in terms of actually being able to lay charges against those who’ve been found with them in their possession,” she said.

“This will stamp that out.

“There is absolutely no place for these dolls in society and we now know they serve no benefit other than potentially to encourage those who are most likely to offend against children.”

Ms Bonaros described the objects as “grotesque” and has raised concerns they encourage paedophiles to commit abuse.

A report by the Australian Institute of Criminology released earlier this year found they could put children at greater risk.

Japan urged to stop the manufacture of ‘abhorrent products’

Department of Home Affairs figures show that 133 child sex dolls were detected by import authorities in the five years from mid-2013 to mid-2018.

The Federal Government is also currently moving to ban the items, but SA Labor has been critical of the length of time it was taking to close the loophole.

PHOTO: Connie Bonaros is preparing to write to other governments. (Twitter)

“As such, the Government has considered SA Best’s legislation and will support it when it goes to a vote in Parliament this week.

“It’s vital our Parliament work together on important child protection issues such as these, and I commend Ms Bonaros for bringing this issue to light.”

Ms Bonaros said she now intended to write to Ms Chapman’s state counterparts to urge them to introduce similar laws, and also to the Japanese Government requesting it take action against manufacturers and suppliers.

“The dolls are currently manufactured in overseas markets — including Japan, China and Hong Kong — and are designed to be as lifelike as possible,” she said.

“Manufacturers go to significant lengths to offer a range of tailored options … most disturbing of all is the trend towards robotic dolls.

“These news laws make it abundantly clear that child-like sex dolls fall within the jurisdiction of ‘child exploitation material’.”