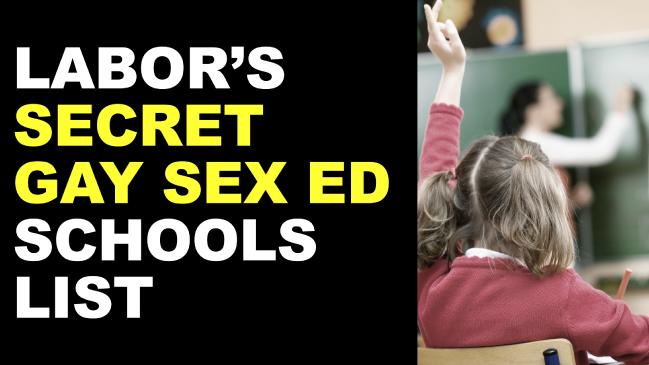 Queensland Labor has been ­accused of plotting to reintroduce the controversial Safe Schools program, amid revelations it plans to invest in a program to support same-sex-attracted and trans­gender students and tackle homo­phobia in the schoolyard.

Critics of the contentious program fear it will be rolled out across the public education system, citing a 128-page party platform document that reveals a commitment to a similar scheme.

The Australian Christian Lobby, which has campaigned ­vigorously against the program during the state election, delivering more than 300,000 flyers to voters, has criticised such a move as “Safe Schools by stealth”.

According to Queensland Labor’s Putting Queenslanders First document, the party will “invest in professional development, training and ongoing support for school principals, teachers and support staff so that they can support lesbian, gay, bisexual, transgender, intersex and queer [or] questioning students and create more inclusive and supportive school environments”.

“This work will seek to reduce discrimination, harassment, abuse and bullying against lesbian, gay, bisexual, transgender, intersex and queer [or] questioning students, ensuring that they are able to achieve the best educational outcomes and ensuring that all students are able to understand and respect diversity.”

The wording is not dissimilar to that used by the Safe Schools Coalition Australia to promote its work.

Initially an anti-bullying campaign launched in 2010, Safe Schools has become divisive in recent years, with conservative politicians, family groups and parents objecting to their children being taught contested gender theory. It has been criticised for a lack of scientific rigour and its potential to confuse young people with postmodernist ideology and radical ideas about gender fluidity.

In Queensland, Education Minister Kate Jones sparked outrage when she refused to publicly release the names of schools that were participating in the program. In June, when the federal government announced it would no longer fund the program, the Queensland government declined to take over funding responsibility in that state.

LNP leader Tim Nicholls has promised to withdraw Safe Schools resources from schools, arguing that they “are no place for agendas and ideologies”.

“Their statement in their document makes it clear they will teach Safe Schools-type material — and not only for children who may be gender dysphoric, but “all students are able to understand” — so this is teaching children that it is perfectly OK to choose a different gender than that which they are born in,” Ms Francis said.

“There is no doubt at all in my mind that ALP totally support the agenda of Safe Schools and will promote it being rolled out throughout Queensland should they get back in.”

Education Standards director Kevin Donnelly, a longtime critic of the program, said it had lost the support of most states — except Victoria, where signing on is mandatory for state secondary schools — after a commonwealth inquiry found some materials were unsuitable for students.

“Premier Annastacia Palaszczuk argues that the Marxist-inspired Safe Schools … is not being taught in Queensland schools and if re-elected, her government has no plans to impose it,” Dr Donnelly said.

“Based on the ALP’s … document … it’s clear, while not specifically mentioning Safe Schools, that a Palaszczuk government intends to force schools to adopt a similar radical gender and sexuality program.” Ms Jones yesterday denied that the Putting Queenslanders First document amounted to “government ­policy”.

“A Palaszczuk Labor government has never funded Safe Schools in Queensland,” Ms Jones said. “If and when principals ask for advice on how to support LGBTIQ students, the Department of Education will always provide that advice.”

“We are running an education program … to alert voters to the fact that the ALP will allow Safe Schools in Queensland schools and we think parents should be aware of that before they vote,” Mr Shelton said.