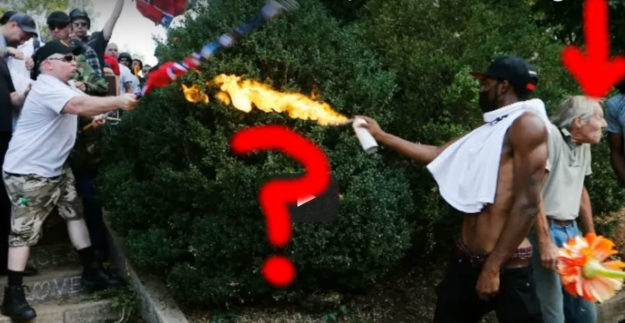 The arch-Zionist criminal minds are at it again to the extreme with the absolutely contrived, totally fake Virginia race riots and fatal car strike. In this regard it is like countless other Zionist-orchestrated acts not a real event and is instead a hoax, make no mistake about it.

It’s a joke at best. What a filthy fake it is, all orchestrated by criminally minded arch-Zionist minds, who seek discord and strike: and no one can demonstrate otherwise.

Look at these hoaxers all working as staging moles. None of them are doing anything real. This is fake pyrotechnic fire that is being shot. Look at the Anglo-Saxon man, stooped down. See also the men with the Confederate flags. All these men are paid staging moles. There is no actual fight or protest here.

It is felony assault to attempt to shoot fire directly at someone. Yet, it is never a prosecutable act to shoot fire from a pyrotechnic device at fellow crisis actors.

What about this car? It is being driven up-and-down through an empty street:

That junk yard special has an area of the windshield, busted up, on the passenger side. This is to create the false impression that the car actually struck a human being, which is clearly not the case.  Yet, if it did so, an airbag would have deployed. This was certainly not the case. Moreover, who is driving the car? It is difficult to see, but whoever did so was merely acting as a stunt-man.

There is no one in the path, directly, of this car. The area was already cleared of people.

The lane, here, is a shopping district area, ideal for such a scam. There is not a single person who can be seen in the path of the vehicle. The area around it is empty of humans, while in the other lane there are dozens of them.

Now, for further proof is the fake fighting. This can clearly be seen as fake in the video. They are fake duking it out. This means they are for certain crisis actors.

While they are acting it out the cameras are in their midst, rolling. There is ‘slugging,’ but it is just flailing; no is hit to any degree.

It can be seen in the video how the arms are unleashed, fists clenched, but no one is hit to any degree.

This man takes a pop at an individual but doesn’t hit him: ever.

Here are two men swinging past each other, while another person touches one man’s back-side: no one is actually fighting in real life, here.

Here is a man taking a fake swipe at the individual in the brown, sleeveless shirt; it is fake, 100%, impossible to deny.

The individual adds to the lie by moving her face to the side, as if it was impacted. Yet, no impact of any kind can be seen.

Now, there is payback as the person then acts like he/she is about to strike the person, but, once again, the blows are rendered harmless.

The man with the can and cell phone, the ratty-legged man, the black man being fake tackled: it’s all to much for anyone with common sensibilities.

Look, too, how there is a man holding a cell phone up high, left screen, capturing the scamming images.
It’s all for a good laugh, although, clearly, it was also job with plenty  of money being exchanged.

How did all these storm-trooper, riot police get there so quickly and efficiently?  As well, what in the world are the laughing and smiling about?

All these storm trooper events with people in the streets tossing smoke bombs – in all cases they are hoaxes. This is a most inane hoax, especially when carefully reviewing any and all video footage. It is criminal Zionist minds, Kenite Jews, who are fully behind this arch-fabricated scam.

That’s it, destroy the streets, loot and steal, and all the Zionist-operated federal government desires is for people to go home and forget about it, to be shamed, publicly? As well, whenever Black Lives Matters is involved, clearly, it is a staged event or a co-opted one. Moreover, whenever the Zionists cry wolf about so-called white supremacists, this, too, is a major red flag of fabrication.

Hoax index: not even worth mentioning.