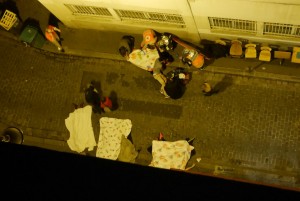 Terrorists Disguised as Refugees Begin their Slaughter of Neighbors

ISIS created the refugee “crisis” and infiltrated the borders of European nations unhindered. Because of this, a terrorist attack of massive proportions has happened today. Just 2 weeks ago we wrote a prediction about this based on a verse from the Quran. We break down the prediction and Quran verse more thoroughly in this new article.  This isn’t even the first terrorist attack in France this year. How many more have to happen before people listen?

People running for their lives.

Six different locations were all attacked today in Paris. From drive by shootings to bombing stadiums, terrorists are inciting fear all across France. According to Micheal Cadot, the head of Paris police, all of the killers are suspected to have died in encounters with police.

Terrorists butchered people at outdoor cafes, restaurants, theaters and stadiums. According to a witness “there was blood everywhere, they were firing a pump-action shotgun into the crowd.” Another witness described “walking on bodies” and dodging bullets to escape. “It took at least 10, 15 minutes, they reloaded, they had all the time they needed,” one survivor told Le Monde (French Newspaper).

“Witness Benoit Tanaka was outside Le Bataclan when he heard a steady stream of shots emanating from the venue. “Screaming in the street as people escape through the backstage … we hear screaming as shots continue to be fired,” he wrote on Twitter.” (National Post, 2015)

At least two restaurants, Le Carillon and Le Petit Cambodge, were packed with diners outside at sidewalk tables. Gunmen showed up with AK47s and started indiscriminately firing into the crowds.  The radical refugees then fled in “one or two” vehicles.

“We were listening to music when we heard what we thought were firecrackers. A few moments later, it was a war zone. Blood everywhere,” a survivor from Le Carillon told interviewers.

Another survivor from Le Carillon said “It lasted a terribly long time. He raised his Kalashnikov and fired indiscriminately into Le Carillon. We heard people screaming … there were a dozen bodies on the ground.”