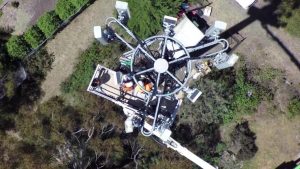 Telstra has successfully activated their first 5G tower in the Byron Shire, a central hub of national opposition against the rollout, TOTT News has been notified.

Residents are upset over a lack of community consultation surrounding the upgrade and are urging Australians to continue boycotting 5G technology.

Despite fierce community opposition, Telstra has begun its rollout of 5G in the Byron Shire by upgrading and activating a mobile phone tower at McLeods Shoot on St Helena Road.

In a press release sent to TOTT News, Northern Rivers for Safe Technology has notified of the upgrade that was made official on the Radio Frequency National Site Archive on 9 March 2021.

Telstra has also confirmed it will complete the following upgrades over the next six months.:

Rinat Strahlhofer from Northern Rivers for Safe Technology said while the group was deeply disappointed that Byron Shire was no longer 5G free, it would continue to take on the telecommunications giant through peaceful and creative strategies.

“This is a David and Goliath battle of epic proportions. Even while 5G has been rolled out across Australia, thanks to the efforts of many across the community, Byron Bay has managed to remain 5G free for the past year since Telstra tried to upgrade Mullumbimby tower last April,” Rinat said.

“The reality is that despite intense lobbying … thousands of signatures collected in opposition to the upgrades and a raft of other measures, our efforts have simply been ignored by Telstra.”

She added: “If Telstra successfully fulfils its 5G plans in the Shire, we are faced with the grim reality of living with wireless radiation 24/7.”

The impacts of this untested technology are potentially harmful for our health, data security and privacy, the environment and more. All this in a destination which is known for its natural beauty; a place that once fiercely opposed a KFC being built in the local area.

Bryon have not backed down to this point, fighting for almost two years now.

In April of last year, Hundreds of Byron Bay protesters ignored social distancing to challenge the installation of 5G. Camping out all night to prevent work.

This was just weeks into the first ever national coronavirus lockdown, a time in which tensions in the community and propaganda on television was at its most fierce. This shows you their dedication.

Now, they are not happy with the lack of consultation involved in this process.

Under the Mobile Phone Base Station Deployment Code, telecommunication carriers are obliged to provide: “Greater transparency to local community and councils when a Carrier is planning sites for, installing and operating mobile phone radio communications infrastructure”

They also must allow the community “to have greater participation in the decision-making process of Carriers when deploying mobile phone base stations”.

Telstra was hit with a formal warning by the Australian Communications and Media Authority (ACMA) for failing to comply with regulations governing the deployment of mobile base stations.

Residents are calling for ACMA to hold Telstra responsible for continued breaches.

In a recent email to Northern Rivers for Safe Technology regarding McLeods Shoot, Telstra stated that “upgrades to existing base stations follow a notification process, rather than a full community consultation, such as we undertake for new sites”.

The group — whose core actions and campaigns have received nationwide media coverage and support from leading international scientists and high-profile organisations in the field — is now urging residents to boycott 5G phones and to be on high alert for upgrade activities.

Did you know that telecommunications companies across the world are testing heating effects of 5G wireless radiation.. on a dummy?!

Mobile phone users are being urged to boycott the next generation of 5G phones and join a new movement calling on urgent changes to existing safety standards because “the test is rigged”.

The creatively-charged We Are Not SAM campaign has this week been launched by Northern Rivers for Safe Technology, a high-profile community group based in Byron Bay, Australia.

it was not widely known that the international telecommunications industry conducts safety tests about the heating effects of mobile phone wireless radiation on a plastic dummy called ‘SAM’.

Or, also known as a Specific Anthropomorphic Mannequin:

During the test, which has not changed since the mid-nineties, the SAM plastic head is filled with liquid to see if it heats up one degree Celsius within a 6-minute call. SAM is based on a 100kg, six-foot tall adult male military recruit with a five-kilogram head.

If the liquid heats under one-degree within that time, the phone is deemed “safe” and ready for sale.

This has not stopped Telstra, however, who are pushing ahead with their 5G vision.

Telstra is planning to deliver 5G services across 75 per cent of the population by June this year, in a bid to build a decisive lead over its rivals.

The company’s CEO, Andrew Penn, outlined the telco’s 5G rollout and coverage plans, in which he revealed that most of the population will be able to access 5G services over the next few months.

Today I am pleased to announce that we intend toextend that to 75% of the population by June.”

His announcement followed Telstra’s pledge that enabled an accelerated 5G rollout during coronavirus lockdowns. The company brought forward $500 million of capital expenditure planned for the second half of 2021 to increase capacity and expand operations.

Telstra’s 5G is already rolling out in 53 cities and regional towns across Australia, with the telco revealing over 600 suburbs have now reached network coverage of 50 per cent.

The 5G digital dystopia is fast approaching, however, there still remains time to make a change.

If you haven’t done so already, now is a great time to join your local 5G community action group, participate in protests, spread information, start discussions and more.

We have seen in the past that 5G tower victories are possible, and the tenacity and passion of Byron Shire protesters should be taken as inspiration for those across the country.

They are ramping up operations because they are admittedly concerned about the power of opposition — or ‘health scare campaigns’, as they call them.

The power of the people will always be greater than the people in power.

It is just a matter of realising this potential.