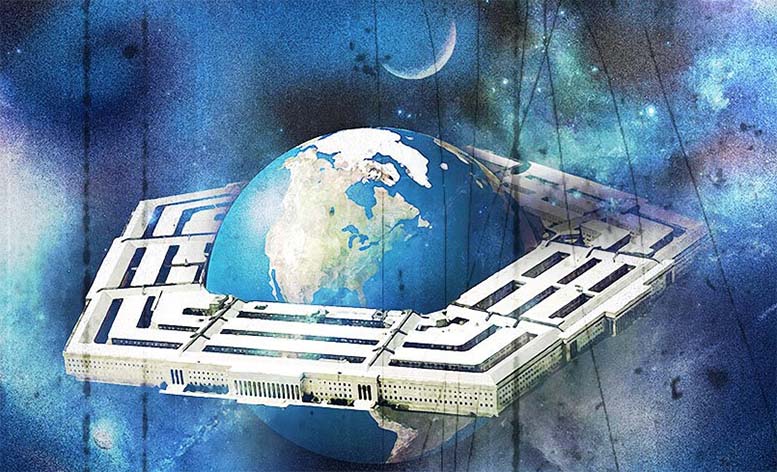 Perhaps it should never be surprising when those who have dedicated their lives to the military should call for a further expansion of the military. However, two retired commanders – Charles F. Wald, Retired U.S. Air Force general, former Deputy Commander of EUCOM; and Ted Johnson, Retired Navy Commander – have penned the most blatant and revealing vision of the future of war I’ve yet come across. It is a vision that literally sees Earth as a prison with the military in charge of the prison population.

In this missive, titled “Military Omnipresence: A Unifying Concept for America’s 21st-Century Fighting Edge,” the two retired commanders convey the military mindset of full-spectrum dominance and control that has ensured a never-ending vortex of conflict from which the military superstate ultimately profits. The endgame, in true Orwellian style, is depicted as one where war becomes peace and only the all-seeing Panopticon of surveillance (real and imagined) can protect the freedom of those who have had all of their movements monitored and all personal liberties evaluated and approved within the “threat matrix.”

This is one of those rare moments where we really get to look behind the curtain at the methods and mindset of those in charge of directing the policies and technologies of war and security. No amount of conjecture or analysis could give more insight than what they say for themselves. We would do well to listen.

When the Royal Navy’s new steam-powered ships emerged victorious from the First Opium War in 1842, one British newspaper could barely contain itself: “Steam, even now, almost realizes the idea of military omnipotence and military omnipresence; it is everywhere, and there is no withstanding it.”

One hundred years later, Wernher von Braun, a German engineer who’d been secretly whisked away to the United States, suggested a different approach: an armed space station into low earth orbit. As he put it, “Our space station could be utilized as a very effective bomb carrier, and the nation who owns such a bomb-dropping space station…will have military omnipresence.”

Today, in the face of other nations’ advances and area-denial strategies, the U.S. Department of Defense is looking for the next set of technological breakthroughs that will allow the military to engage “at the time and place of our choosing.” But unlike steam engines or space stations, the technologies and supporting architectures that can actually establish omnipresence today are possible.

The strategy to regain our fighting edge has been called the Third Offset. But whether given this or some other name, one of its primary shortfalls is that it lacks a unifying concept. Many believe the present approach is really just a set of technology investments and is too focused on futurist technologies. And some scholars have argued that it seems to have “no clear purpose or urgency.”

Military, or operational, omnipresence is the answer to this dilemma.

Operational omnipresence is exactly what it sounds like: perpetual, networked presence that enables operations and awareness anywhere in the world. It consists of three primary interconnected components: physical assets, virtual capabilities, and information. It’s the culmination of where you are, where you can be quickly, and awareness of what is occurring everywhere else. In other words, operational omnipresence is superlative forward presence — a U.S. military preoccupation since at least World War II — accomplished by a variety of interacting means.

Execution of this concept is exceptionally difficult, but that’s how competitive advantages are realized.

Making operational omnipresence a reality requires surmounting the tyrannies of time, distance, and information—the significant difficulties associated with operating across great distances and needing to be quick and sure-footed in doing so. It can do so via its three essential components of presence: physical, virtual, and perceived.

Physical presence is the strategic positioning of military forces around the world such that they are always in relative proximity to contingencies. In addition to deploying ships and planes abroad, the U.S. military maintains more than 150,000 service members on 800 bases in 70 countries. This is the most expansive military footprint of any nation, and accounts for more than 95 percent of the world’s foreign bases. Further, the current presidential administration has articulated its goal to increase physical presence in a recent executive order. When coupled with unmanned and autonomous vehicles and aircraft, physical presence is remains a U.S. strength.

But there will be gaps, and virtual presence can help fill them. Previous conceptions of virtual presence have defined it as being physically nearby or having a passive presence via technology. But today, virtual presence exists where force can be applied quickly from a distance — within hours or even nanoseconds — and includes cyber, electronic, and space-borne warfare. Whether moving at the speed of light from thousands of miles away to strike in cyberspace, reassuring allies and partner nations through the sharing of digital capabilities, or causing adversarial nations to adjust their decision calculus as these two things come fully online, virtual presence can be a true form of forward presence.

Perceived presence rounds out the operational omnipresence concept. Perceived presence is the use of technology to collect information and monitor events occurring in places in which physical and virtual presence aren’t possible. Though it doesn’t permit the application of force, the perception of being watched influences behavior — an insight that goes back to the concept of the panopticon introduced by 17th-century English philosopher Jeremy Bentham.

Today, cyber- and satellite-enabled surveillance, coupled with traditional forms of intelligence gathering and the ubiquity of the press and personal devices, means that a global electronic version of the panopticon is possible.

This article may be freely republished in part or in full with author attribution and source link.