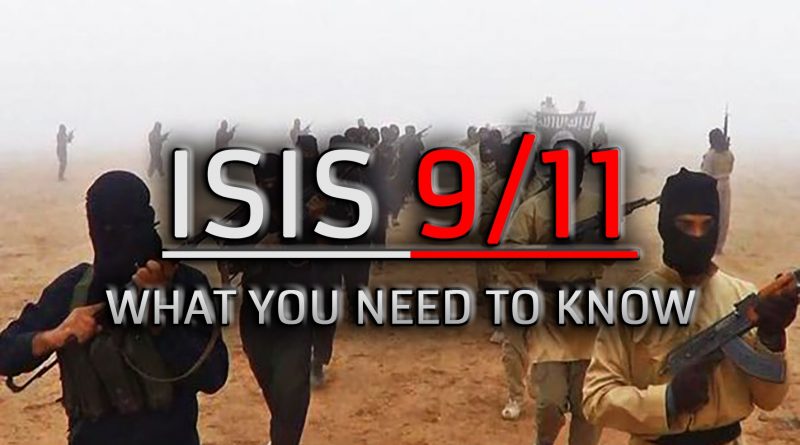 Notice how this past week several odd ISIS stories suddenly appeared in the news? That “sudden” quality feel is very important to note. That’s your brain saying, hey why wasn’t ISIS busy committing “terrorism” during the Summer Olympic games in Brazil? Or, if they secretly were committing acts of terrorism then why wasn’t the mainstream media telling us about it during the Olympic games? The answer to the latter question is because there was no ISIS terrorism for the mainstream media to tell us about during the Olympic games. The answer to the former question is ISIS didn’t commit terrorism during the Olympic games because ISIS doesn’t exist in the manner that we’re told. They are NOT an organization that can sustain themselves, outsmart all the global powers and Intelligence services and they are simply not the group portrayed by mainstream media. They are a planned, create, armed and trained proxy army for the United States and they too do as they are told at the highest levels.

Think of it from the point of view of ISIS fighters: the bosses who gave you your guns, supplies and are looking out for your safety will tell you what to do next and you will listen. Doesn’t that logic sequence make sense from the point of view of an ISIS fighter? ISIS fighters only do what they are told just like any small gang would. For any individual fighter to act on his own outside of the mission of the group could and eventually would be detrimental to the group. The media is constantly playing the “ISIS is so rich and powerful” card to get you to believe that they can buy themselves out of being tracked, captured, defeated, dismantled and done away with. I’ve been discussing the mainstream media “ISIS is god” psyop marketing campaign for several years now. In the famous words of Obama’s former Secretary of Defense Chuck Hagel:

Oh this is beyond anything that we’ve seen!

Timing is something I always emphasize when it comes to analyzing government psyops, false flags and staged events. It’s one of those components of reality that even the bad guys can’t help themselves but to reveal. It’s up to the astute truth-seeking observer to notice the timing of these stories and include the meaningfulness of this timing to the rest of the story. Anyone paying attention can see that ISIS stories essentially disappeared from the mainstream media news during the Summer Olympic Games in Brazil. But following this past weekend’s Olympic closing ceremonies all of a sudden bizarre ISIS stories are surfacing everywhere. Here are just a few recent stories that either involve ISIS or imply ISIS. Either way the stories serve the same purpose – to ratchet up fear as we approach the 15th anniversary of September 11th:

1- All of a sudden (we’re told) that ISIS released a “dramatic 10-second video” as “proof” that supposed hostage “Kayla Mueller” was in their custody in 2013 after being captured in Syria. The human interest component of the story (lending suspicion that this is State propaganda) is as usual over-the-top. (key words in bold)

A dramatic 10-second video released this week by aid worker Kayla Mueller’s family showed the woman pleading for help shortly after Islamic State fighters kidnapped her in Syria in 2013.The brief clipserved as her proof-of-life video. U.S. officials confirmed last year she was killed. The cause of her death remains murky, though ISIS claimed a Jordanian airstrike killed her.

“My name is Kayla Mueller… I need your help,” she was reported as saying in the video. “I’ve been here too long, and I’ve been very sick. It’s, it’s very terrifying here.“

With this one “brief clip” which you can watch here a fresh new psyop story has been launched on the consciousness of the masses who believe this type of US government State propaganda. To bring it home you then have to offer the “solution.”

Mueller’s parents live in Prescott, Arizona. Speaking to ABC News, her father, Carl, described seeing the video for the first time. “You just go into almost a catatonic state, I think. You can’t even stand up.” Her mother, Marsha, added, “It broke my heart, but I also saw her strength.”

Carl Mueller told The Arizona Republic last June the U.S. needed to take military action against ISIS, and that there seemed to be no repercussions for hurting Americans.

“They need to take forceful action against these people,” he said. “They need to know if you kidnap Americans, you are going to die.Right now, they’re given a free pass.”

Conclusion? Or should I say, translation? We need to get out there and kick some butt with some real military action against ISIS. Let’s do it!

Stories like these have replaced the 1950s-style billboards warning us about the “evil Soviets” or how we need to “stop communism.” The difference today is that you can release a 10-second video-clip sold as “reality” news and get a more powerful and broad reaction from the people. The days of relying on politically based propagandized illustrations and billboards to get the message across are long gone. This is a sample of modern-day information warfare at its best.

2- I documented another bizarre story this past week where a hoax ISIS scaremongering event was staged in Prague by a character who seems to have arrived on the scene just a few years ago. Martin Konvicka, a radical anti-Islam anti-immigration “activist” along with his followers staged an oddly realistic “ISIS attack” on the people of Prague causing panic in the streets. His history as an anti-Islam activist (again, timing) seems to have kicked off in 2014, right as ISIS was rolled out to the American public consciousness. Coincidence? You decide.

3- And in even odder story ironically also staged in Prague this week, though not directly attributed to ISIS (yet) but the story subliminally suggests ISIS, an “armed” mystery man was arrested “trying to infiltrate German Chancellor’s motorcade“:

A feared assassination attempt on German Chancellor Angela Merkel has reportedly been foiled in Prague.

Czech police halted an armed man in his car as he allegedly tried to join Merkel’s motorcade during her visit to the capital.

Local reports claim that officers found a baton, a canister of tear gas, cement blocks, and handcuffs in the man’s black 4×4 Mercedes.

“The perpetrator has been detained,” police spokesman Josef Bocan said.

“He is suspected of attempting to cause a crime – specifically an attempt to use violence against an official.”

“Thanks to the professional actions of officers, Angela Merkel’s life was not in danger.”

“The incident is currently being investigated by Prague detectives.”

This odd story is an example of the power of propaganda. Without the article stating that ISIS is responsible for this supposed “assassination attempt” the reader is left thinking “ISIS?” and personally I believe this is the intended effect. After all, who else would be caught in this lead-up to the 15th 9/11 anniversary of September 11th globalist terrorist attack on America, in broad daylight mind you, with a baton, tear gas, cement blocks and handcuffs in their car?

In summary, the point is that with the Olympics now done and with the 15th anniversary of 9/11 right around the corner, on cue the ruling elite are ratcheting up the fear and anticipation of ISIS likely for an upcoming big event for which they will blame “ISIS.” Or perhaps it will be a big event that they will use to blame Russia, Syria, Iran or one of the other nation states that have said no to the Western central bankers so they can justify the start of WW3. Either way ISIS will be at the center of this as the propaganda is now building up suggesting that Syria and Russia are attacking the “rebels” who are trying to supposedly attack ISIS.

Let’s face it, we’re coming up on ISIS season (just like they are stirring up the pot for a big Zika virus psyoplikely coming this fall) and the recent bizarre stories are just the tip of the iceberg for what they are planning.

It’s time to get familiar with the script:

A. They float out many smaller stories; then they

B. psychologically build you up to the big event.

Let’s prepare for this psyop script and find ways to expose their agenda and their fake and sponsored terrorism without which there is no hope for the new global order they want so desperately.

Thankfully, there’s nothing the ruling elite can do to obscure the revealed knowledge we have about who created, armed and trained ISIS. We can also see for two solid years that the US is not interested in finishing off ISIS. We’ve also observed for two full years that their mainstream media just wants to glorify ISIS and make you think that ISIS is always getting bigger, stronger and scarier. This apparently is the latest memo they (the MSM) has received. The propaganda ammo is flying and the American people’s minds are the targets. Build up ISIS 2014-style and prepare the masses for what is coming.