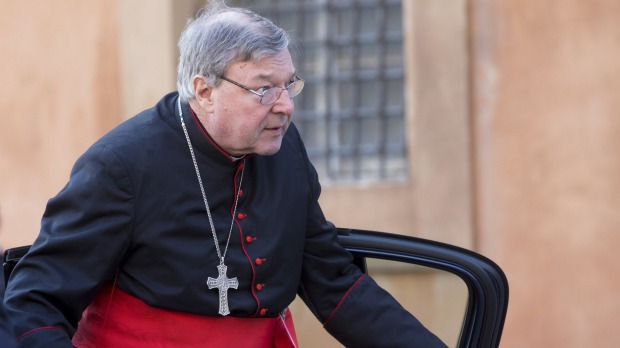 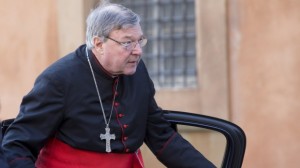 A survivor has told a royal commission he overheard George Pell joking about paedophile priest Gerald Ridsdale “rooting boys again” more than a decade before Ridsdale was convicted of multiple counts of child sexual abuse.

Cardinal Pell – who will appear at the child abuse royal commission in Melbourne next week – was widely criticised for supporting Ridsdale at his first court appearance for child sex offences in 1993. Cardinal Pell was also present at at least one meeting of senior priests which decided Ridsdale should be moved to another parish, but maintains he never knew children were being abused while he was in Ballarat.

The survivor, known as BWE, told the commission on Monday he was aged between 10 and 12, and getting ready to serve as an altar boy for a funeral mass, when he overheard Cardinal Pell speaking to parish priest Father Frank Madden in the sacristy at St Patrick’s Cathedral in 1983. Cardinal Pell, he said, was officiating the mass because the deceased woman was either his former parishioner or close friend.

Cardinal George Pell maintains he did not know children were being abused in Ballarat but has been accused of joking about Gerald Ridsdale’s abuse. Photo: AP

“After they had exchanged pleasantries, Father Madden said ‘How’s everything your way?’ or words to that effect. George Pell responded by saying ‘Haha I think Gerry’s been rooting boys again’.”

BWE said that the door between the alcove and the sacristy was usually open because altar boys did not need to remove their clothes to wear their church robes.

Father Madden then shut the door between them for about 30 seconds. When it opened, both priests had left the area.

He did not speak to the other altar boy (BWK) about what he had heard.

“This remark shocked me to the core,” he said, because his older brothers had warned him when he was five that Gerald Ridsdale – currently serving time for 30 offences committed against 14 children – would “put his birdie (penis) in your bottom.”

BWE stopped being an altar boy after this incident, and later was abused at St Patrick’s College.

BWK, told the commission he does not remember hearing the remark, or a funeral where both priests presided, or serving mass with BWE. “If I did I think I’d probably remember that … to me that seems quite an outrageous sort of statement that would stick in my mind.”

BWE said he was “absolutely certain” Cardinal Pell was talking to Father Madden, despite the fact Monsignor Nolan was the parish priest of the cathedral from 1982 till 1985.

Lawyer Sam Duggan, for Cardinal Pell, said that Ridsdale was at that time working in Sydney, so that any remark from Cardinal Pell about Ridsdale “makes no sense whatsoever … in fact Gerald Ridsdale had been out of Ballarat for the better part of a decade.”

Earlier, Mr Duggan challenged survivors’ accounts of conversations with Cardinal Pell, against the church’s policy not to cross-examine victims of clergy abuse out of sensitivity.

David Ridsdale has told the commission that Cardinal Pell tried to bribe him after he told him his uncle Gerald Ridsdale had abused him as a child, saying in 1993 “I want to know what it will take to keep you quiet”, which Cardinal Pell denies.

Mr Ridsdale denied Mr Duggan’s argument that the allegation had arisen out of a “misunderstanding” between the pair, after Ridsdale, and not Cardinal Pell, had brought up the subject of financial difficulties, saying he had a well-paid job and house at the time.

If there was a misunderstanding “George Pell’s never taken the opportunity to correct that, to contact me, or to do anything of that nature”, Mr Ridsdale said.

Reverend John Thomas Walsh, who was living with Cardinal Pell at the time, wrote to the commission on Sunday night, to say he remembered Cardinal Pell was upset after the phone conversation with Mr Ridsdale: “My impression was that George Pell was worried for David Ridsdale and felt sad and upset about the abuse he had suffered … his demeanour was not that of a person that had been in a rude or angry conversation.”