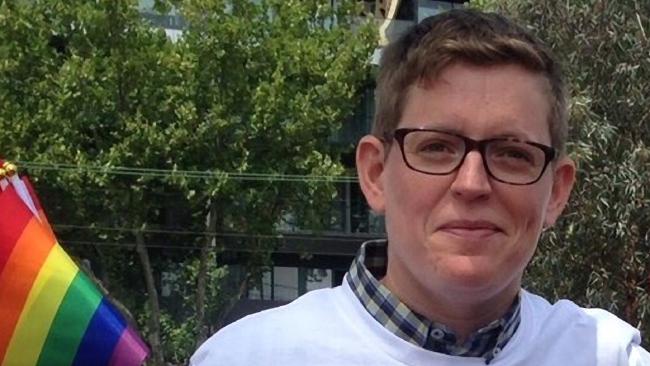 Roz Ward posted a photo of the rainbow flag on top of Victoria’s Parliament House on Facebook.

Safe Schools Coalition co-ordin­ator Roz Ward was forced yesterday to quit her advisory role with the Victorian government and faces a university ­investigation over a Facebook post where she ­labelled the Australian flag “racist” and called for it to be replaced with a socialist red ­ensign.

Ms Ward, who was advising the government on LGBTI issues, posted the incendiary statement after Premier Daniel Andrews apologised in the parliament on Monday for past gay discrimin­ation.

The government hoisted a gay-pride rainbow flag on Victoria’s Parliament House as part of the historic event.

Ms Ward posted a photo of the rainbow flag on top of Parliament House on Facebook with the comment: “Now we just need to get rid of the racist Australian flag on top of state parliament and get a red one up there and my work is done.”

The Weekend Australian ­discovered the message during the week and on Thursday night asked the government and Ms Ward for comment.

In response, Ms Ward’s resignation and an apology was distributed to the media yesterday and the post removed yesterday morning from her Facebook page.

The government’s Gender and Equality Commissioner, Rowena Allen, said it was inappropriate.

“Ms Ward has acknowledged that the post was inappropriate and may have caused offence, even if meant in jest, and posted in private,” Ms Allen said.

Ms Ward remains employed as the Victorian co-ordinator of Safe Schools through La Trobe University, but a university spokesman said her post was being inves­t­igated.

“While the university respects academic freedom and the importance of free speech, we are concerned about the impact these comments could have on the good standing of our researchers in this field and the university takes this very seriously,’’ the spokesman said. “We will commence an invest­igation and consider all our available options.”

Ms Ward yesterday expressed regret. “I apologise for any offence that comments, posted on my ­private Facebook page, may have caused the government and ­members of the LGBTI community,’’ she said.

“These were private comments that were never intended for the public domain.’’

A government spokeswoman said: “Ms Ward’s view on the Australian flag is inappropriate and does not in any way represent the Victorian government’s view.”

The move may cause a headache for Mr Andrews, who has ­decided to fund Safe Schools in its current form, despite the federal government deciding its curriculum should change.

The program, which was ostensibly designed to prevent bullying of gay and transgender students, will be compulsory in Victorian state secondary schools by 2018.

The federal government pulled its funding from Safe Schools in March and gutted the curriculum after concerns from conservatives that it promoted a leftist ideolog­ical agenda.

Ms Ward has come under fire previously for linking the program with political causes. Railing against a “push to fit people into gender constructs that promote heterosexuality’’ at a Marxist ­conference last year, she alluded that Safe Schools was part of a broader strategy to change society.