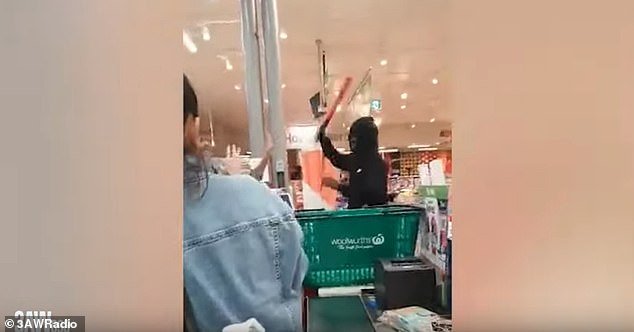 The frightening moment hooded thugs armed with baseball bats and a kitchen knife stormed a Woolworths has been caught on camera.

The video showed the gang of youths as they terrorised customers and employees at Lyndhurst Woolworths on Thompsons Road, in Melbourne‘s south east, just before 9pm on Sunday.

Scared workers screamed with their arms in the air as the offenders shouted from across the room and began counting back from five before throwing an object over the counter.

One man then approached an employee and struck her with a baseball bat.

Local man Rob was on his way to buy cigarettes when saw the gang trying to escape via the carpark with a trolley full of groceries.

He saw the offenders assault a female employee and acted ‘without thinking’.

‘I saw them assault a lady that tried to stop theft, I chased them and then defended myself,’ he told Daily Mail Australia.

Rob knocked two weaponless offenders to the ground before onlookers helped him against the remaining two.

One thug pulled a large kitchen knife before retreating to their car.

‘I felt sick to the stomach because my girlfriend was nearby,’ he said.

Another witness posted a screenshot on social media of a series of text messages they sent as the chaos unfolded.

‘Five-six guys attacked this guy at the front of the store. I think they had bats and a knife,’ the message read.

‘The store is locked down.’

‘There is no place for this aggression and violence anywhere in our community and our thoughts are with those caught up in the incident,’ a spokesperson told Daily Mail Australia.

We thank our team for acting quickly to lock down the store in line with our safety procedures.

‘We’ve been supporting Victoria Police with its investigations and will continue to help in any way we can.’

‘We’ve also moved to strengthen the security presence at the store.’

‘Police have been told a knife was produced and several customers attempted to intervene,’ she said.

‘No one required medical treatment. The group left the scene in a vehicle and are yet to be located at this stage.’