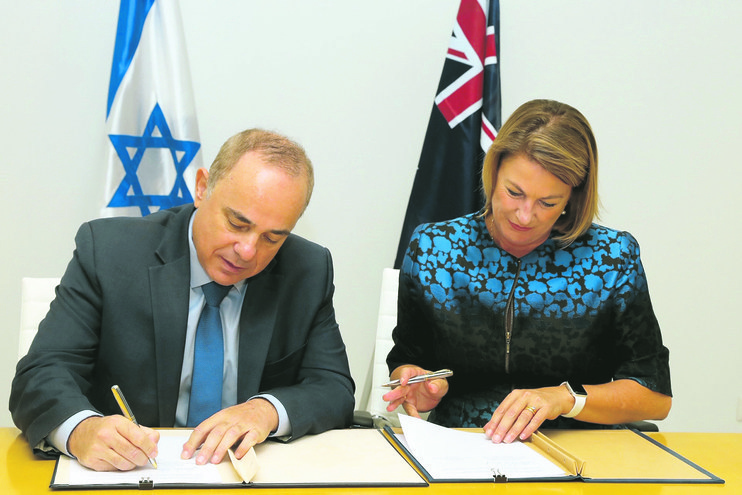 The NSW government has signed a memorandum of cooperation with Israel, allowing the country to “support water management programs, help inform policies and secure the state’s water future”.

The agreement is expected to thrust Israeli ideas and technological innovation to the forefront of efforts to save New South Wales from severe drought, but many critics have raised concerns over the moves.

The New South Wales government is stepping up collaboration with Israel on water management, signing what it dubbed a “historic” agreement with the regime late last year.

The agreement comes as the situation in drought-stricken NSW regional towns continues to worsen following recent Australian bushfires across the east coast.

In 2013, Steinitz was Strategy and Intelligence Minister of Israel and oversaw the activities of the secret service initiatives and the Atomic Energy Commission.

During her trip, Pavey visited Yehuda to meet the CEO of TaKaDu, an Israeli company that has contracts with Sydney Water and Victoria’s Central Highlands Water.

This followed on from the MoU for Bilateral Cooperation in R&D and Technology Innovation signed in April 2016 by both respective governments.

According to Pavey, NSW has a lot to learn from Israel, which she described as “the world leader” in water security. As we have explored, however, a large factor involved in NSW water worries stem from prioritisation of large agribusiness and mining over communities — not a lack of water.

Israel, who is looking to influence Australia’s water habits with this deal, has used control over water resources to continue its war on Palestinians, whose land it has occupied since 1948.

Israel has been internationally condemned for its deliberate policy of depriving millions of Palestinians access to regular clean water through the theft of water resources and destruction of wells and pipes in Palestinians communities.

A World Health Organisation (WHO) report in March of 2019 says that denial of clean water to Gaza will soon make that densely populated strip of land uninhabitable. They also insists that 97 per cent of water pumped from Gaza’s aquifer fails to meet minimum standards of quality.

Israel controls nearly 80% of the water in the Palestinian territory of the West Bank, ensuring that Palestinians — who consume four times less water than Israeli settlers in the West Bank — are forced to buy back water from Israel at exorbitant prices.

Israel has also blocked almost all Palestinian attempts to build wells to extract water from the main aquifer below the West Bank and destroyed numerous existing wells critical to agriculture.

OXFAM concludes that less than four per cent of fresh water in Gaza is drinkable. The US-based RAND Corporation says that one fourth of diseases in the besieged Gaza strip are water borne and that water is frequently unavailable at Al Shifa, the largest hospital in Gaza.

In spite of this, NSW Water Minister Pavey praised Israel for “virtually drought-proofed its cities and continuing to provide farmers with water”.

“In NSW, we’re improving water security and efficiency, and this ongoing relationship with Israel will provide us with invaluable insights into how we can improve this.”

So far, Israel have already sent ‘water experts’ to Orange, where stormwater harvesting systems received international appraisal they seek to learn from Australia’s water management and share their own ‘drought measures’.

What are they planning? Well, the MOU doesn’t specify what form cooperation will take, but reports suggest that it is expected to start with ‘experts’ from the two states meeting. Israeli water technology is expected to become more common in Australia as a result.

Israel have said their ministry outlined three main areas in which water management can provide ideas for Australia: reuse of water, making desalination commonplace and reducing waste of water.

These events suggest potential for far more than Israeli influence in water management.

Once accepted as a partner, the Israeli government and corporations will have a chance to give advice and promote sales, incorporating Israeli-built information technology into our management framework, irrigation systems, surveillance equipment and even the manufacture of infrastructure.

On 21 November 2019, the Zionist Federation of Australia awarded the Jerusalem Prize to Prime Minister Scott Morrison for “his friendship and support of Israel”. Scott Morrison used the occasion to praise the Israeli government.

Let’s not forget, the creation of Israel depended heavily on the actions of an Australian who served as President of the United Nations General Assembly at the time of Israel’s admission to the UN.

Herbert ‘Doc’ Evatt was a key player who guided the Palestine Partition Plan through the UN, and in so doing, transformed the history of the modern Middle East.

At the time, Evatt was also appointed Chairman of the Ad Hoc Committee on the Palestinian Question and moved against competing proposals from the Middle East.

Israel’s influence in Australia exists in a number of avenues, including Israel’s contribution to our country through medicine, technology, security and the environment.

Israel’s desalination and water security facilities are working closely with start-ups such as TaDaKu — that has operations in Australia — and reports indicate that these plans would be put into place as “quickly as practical” and is ‘hopeful that it will provide relief’.

Human rights activists, along with those fighting to put water back into NSW’s rivers, must demand the state government break off all agreements with Israel.

Given water scarcity rates in Australia, should we be allowing a country that uses water as a weapon against Palestinian people the opportunity to influence in water management? Is this in preparation for Agenda 2030?