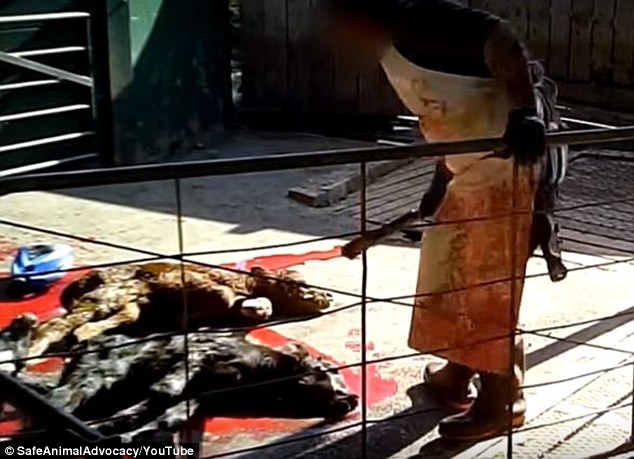 This heartbreaking footage was captured by the HSUS at McArthur Dairy Farm in Florida. The video shows one of the methods used by dairy farms in order to kill male calves.

As seen, the workers shoot days-old calves in the head, then leave them to bleed in a mass grave. The worker doesn’t even make any special effort to shoot the calves in a way that will deliver a quick death. In addition, each calf only gets one bullet in order to save costs.

But why are they killing baby calves?

Since cows can only produce milk after giving birth, dairy farms have to constantly impregnate the cows. As a result, many baby calves are born. Since male calves will never make milk, they are essentially useless to a dairy farm. Some farms let the calves live for a few months in order to slaughter them for veal. Others don’t even bother and kill them when they are a few days old.

Does separating a mother cow and her baby sound reasonable to you? How would you react if someone kidnapped your newborn baby from you?

Watch the nightmare that every newborn calf goes through on dairy farms. The mothers are left distraught, never knowing what happened to their precious babies. Mother cows are known to cry out for weeks after their babies are taken away, returning to the place they last saw them.

Hidden Cameras inside a dairy farm in Ohio show the utmost sadistic abuse of cows and their young. This undercover footage by Mercy For Animals shows what some workers do to animals when they think that no one is looking. Filmed inside Conklin Dairy Farms, Ohio.

People with a psychopathic or sadistic tendencies may find it appealing to work in slaughterhouses or factory farms as this allows them to assuage their need for violence without social or legal repercussions. However, many of these workers are just regular people who rely on these jobs to make a living and often do not have other employment options. Indeed, many factory farm or slaughterhouse workers are either illegal workers or are struggling to make ends meet.

This leaked footage from a big dairy farm in the U.S. will make you feel bad for cows. The hidden camera placed by Compassion over Killing, shows us the lives of cows used for dairy in the U.S. This time, we get a look inside Mason Dixon Farms, a massive dairy farm in Pennsylvania, U.S..

Udder flaming is a dairy farming practice where workers run blowtorches under the udders of cows to burn off their little hairs. This helps to facilitate the work of the sucking machines designed to imitate a calf and trick the cows bodies into giving milk.