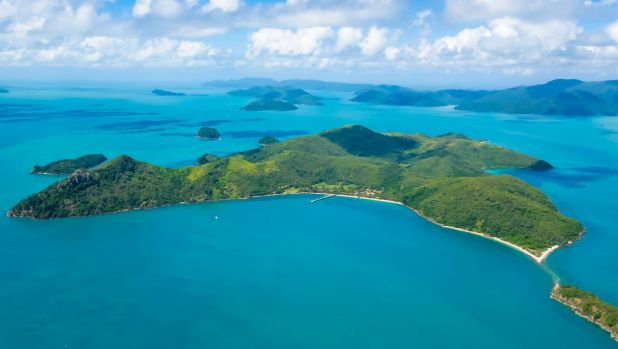 What does Australia do with some of the most beautiful islands on earth? Sell them off to the Chinese of course. The average Aussie is little more than a stumbling zombie so who cares anyway, right? Who needs food, water, air & while we are at it, who needs a country anymore? Better start learning mandarin for our new masters & convert to Islam just to keep everyone happy. It’s not all doom & gloom, because the new season of the Bachelor is underway & the Bulldogs won tonight. We are being told how great this all is for tourism, my ass & it defies belief that Chinese investors can just walk in & snap up Great Barrier Reef Islands like this.

ARE WE SURE THAT IT IS ACTUALLY THE CHINESE THAT HAVE PURCHASED
SOUTH MOLLE ISLAND
ARE WE SURE THAT IT’S NOT SAUDI ARABIA … who have set up a corporate name & bank account in China so as to present themselves as Chinese.
THEN AGAIN IT COULD BE THE UNITED STATES OF AMERICA … intent on owning & controling the whole world … or maybe owning just a bit of clean dirt as every inch of the USA is totally contaminated .
IT COULD ALSO BE ROTHSCHILD
TOGETHER WITH A FEW OTHER JEWISH BANKING CARTELS … discreetly picking up small parcells of real estate to add to the already large global real estate portfolio, which will make up THE NEW WORLD ORDER.
All you have to do is regester a company in China & Bang you are a Chinese Property investor.
You see China has billions of dollars of property development of it’s own, that no one want’s … a failed property development to the tune of billions of dollars
A Massive skyscraper type FAILED PROPERTY DEVELOPMENT in China.
They are in no position to buy little islands off the coast of Australia.

South Molle has been snapped by China Capital Investment Group.

Chinese investors have purchased South Molle Island in the heart of the Whitsundays.

China Capital Investment Group (CCIG) have snapped up the island for a reported $25 million, a little more than a year after buying the nearby Daydream Island Resort and Spa.

Long-time owner Craig Ross put the perpetual leasehold for the island, which has been operating as a backpacker haven, on the market in April.

CCIG said purchasing the island was a great opportunity to expand its presence in the Whitsundays.

“This was a great opportunity to acquire one of the last large-scale development opportunities in the Great Barrier Reef,” he said.

“Owning two island resorts like these in the Whitsundays will also provide economies in regards to resources and staffing and ultimately the diversity of guest experiences.”