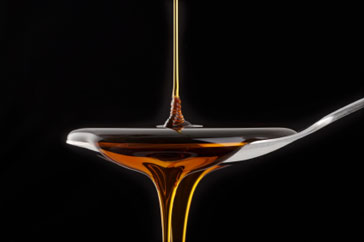 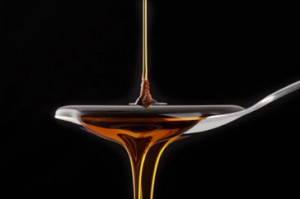 Real Maple Syrup: Minerals from Deep Inside the Earth

Over the past several decades of unsustainable agricultural practices, farmland topsoil has lost much of its organic mineral content. There are a few food items from crops that do not depend on topsoil for its nutrition. Among them is maple syrup.

The large more commonly used maple tree varieties and even occasional birch trees tapped for their saps have roots that extend far below the topsoil level into layers of relatively pristine and less adulterated deep soil. It’s there that maple syrup gets its high mineral content.

According to Ed McCabe, author of Flood your Body with Oxygen, the nutritional order of importance is: Oxygen, water, enzymes, minerals, and vitamins. The preceding items are what the following nutrients need for proper utilization. Thus, we need minerals even more than vitamins.

Droplet of maple sap flowing from tap on a trunk of a maple tree into a pail to produce maple syrup.

The commercial cheap, fake maple syrups are mostly chemically colored water sweetened with high fructose corn syrup (HFCS) or GMO beet sugar or simply colored corn syrup. They should be shunned, not only for culinary quality reasons, but for your health. These fake syrups are disease bombs.

For early harvest syrups, it usually takes 30 to 40 gallons of maple tree sap boiled enough to evaporate the water out, resulting in only one gallon of maple syrup. Tapping is done on maple trees that have been around for a few decades, maybe 40 years or more. The tree’s diameter is at least 8 to 12 inches, depending on regional guidelines, allowing for up to three taps per tree trunk.

The trees’ tapped and collected saps are transferred to a “sugar house,” where the boiling takes place. Modern techniques involve tubes attached to the trees, using vacuum pumps to force the sap through the tubes all the way to the sugar house.

However, some smaller maple farms still use horse drawn sleighs and workers who take the buckets attached to the trees then dump the sap into a large container on the sleigh and carry it the sugar house. During the four to six week tapping seasons, this manual effort requires three trips through the maple forest daily.

If you’ve noticed the maple syrup grading system letters, you may still be wondering what that’s really all about. Grade A is the early harvest and Grade B is the late harvest. The total harvest season may be four to six weeks during winter’s waning period.

March is considered an ideal month for harvesting. Thus the harvest or sapping season often begins just before March and ends just after that month. Cold nights and warm days serve to draw maple tree sap, which looks like plain water, from the maple tree roots and out the trunk taps.

Grade A by our logical alphabetical rating standards means it’s superior compared to Grade B. But taste and color considerations aside, the word soon got out that Grade B’s late harvest allows for more accrued nutrition. Apparently this has also been confirmed in a University of Wisconsin lab analysis study.

Now the Grade A and B system is being phased out. Maple syrup labels will soon use colors attached to Grade A: Golden, Amber, Dark, and Very Dark. The Grade A Very Dark is your latest harvest that was previously labeled Grade B. But you may still see Grade B on store shelves as the new rule is gradually phased in.

According to the researchers, maple syrup causes genes involved in the production of harmful ammonia in the liver to be less active. Their findings led the investigators to conclude that pure maple syrup may promote liver health.

High mineral content in maple syrup has been known for years. Manganese, magnesium, calcium and zinc make maple syrup’s mineral content similar to that of molasses, but without molasses’ overpowering taste. The roots of sugar cane used to make molasses also extend well below topsoil levels.

He presented research data at the 241st American Chemical Society’s (ACS) National Meeting in Anaheim, California, in March 2014. According to Seeram’s report, 20 of the 34 newest healthy compounds were discovered during the year prior to this ACS conference, five of which had never before been seen in nature.

Many obscure polyphenols and antioxidant compounds that create healthy internal biochemical cascades are among the 54 healthy compounds found in maple syrup. Some are anti-carcinogenic, and some are helpful for avoiding or minimizing diabetes risks and symptoms to the point where even “prediabetic” metabolic disorder folks can use pure maple syrup moderately.

At the ACS conference, Seeram stated:

I continue to say that nature is the best chemist, and that maple syrup is becoming a champion food when it comes to the number and variety of beneficial compounds found in it. It’s important to note that in our laboratory research we found that several of these compounds possess anti-oxidant and anti-inflammatory properties, which have been shown to fight cancer, diabetes and bacterial illnesses.

We already know that maple has more than 100 bioactive compounds, some of which have anti-inflammatory properties. Brain health is the latest topic of exploration and we look forward to learning more about the potential benefits that maple syrup might have in this area.

From the UK newspaper The Telegraph:

According to researchers at the American Chemical Society (ACS), the popular syrup could help to stop the brain cell damage that causes Alzheimer’s disease.

The researchers examined results from 24 studies focused on promoting a healthy brain through diet and found that authentic maple syrup – which comes from the sap of a maple tree – could help to prevent proteins found in the brain from “clumping” together and triggering the disease – a process known as fibrillation.

When cellular proteins fold improperly and clump together, they accumulate and form the plaque that is involved in the onset of Alzheimer’s and other brain diseases. Pure maple syrup extract also demonstrated neuro-protective effects in rodent’s primary immune brain cells, a decrease of which is associated with many neurological problems, including Alzheimer’s.

But moderate maple syrup consumption included in one’s diet may add potency to other nutrients that boost brain and neurological health, such as turmeric’s anti-inflammatory curcumin and virgin cold pressed coconut oil’s ability to provide ketones that are easily metabolized for energy by brain cells.

Regardless of whether maple syrup proves to be a major or minor deterrent against Alzheimer’s, it’s good to know that using real maple syrup is actually beneficial for health in general. And it’s not just tasty with pancakes and waffles, but for glazing foods when cooking or baking and as a hot beverage sweetener.