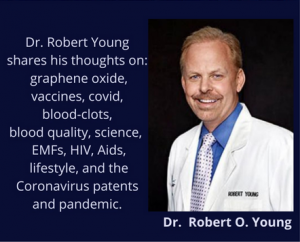 On today’s podcast show i am joined by Dr Robert Young to chat about his many years of research and his incredible investigations into grapheme oxide and the COVID injections.

Dr Young walks us through the unbelievable damage being caused by the COVID jabs and breaks down the virus/germ theory con and explains what illnesses symptoms really mean.

There is only ONE Sickness, ONE Disease and ONE Treatment.  The ONE Sickness and ONE Disease is the overacidificaiton of the blood and then tissues due to an inverted way of living, eating, drinking, breathing, feeling and believing.  And there is only ONE Treatment and that is outline in The pH Miracle revised and updated book which you can order at: www.phmiracleproducts.com Over the past two and a half decades, Robert O. Young has been widely recognized as one of the top research and clinical scientists in the World. Throughout his career, his research has been focused at the cellular level. Having a specialty in cellular nutrition, biochemistry and microbiology, Dr. Young has devoted his life to researching the true causes of “disease,” subsequently developing “The New Biology™” to help people balance their life.

​Dr. Young’s research has been published in several noted journals, including The Journal of Alternative and Complementary Medicine. (Sympathetic Resonance Technology, Scientific Foundations and Summary of Biologic and Clinical Studies, Dec. 2002, Vol. 8, No. 6: 835-842.), the International Journal of Complimentary and Alternative Medicine (Alkalizing Nutritional Therapy in the Prevention and Treatment of Any Cancerous Condition – https://medcraveonline.com/IJCAM/IJCAM-02-00046) and The International Journal of Vaccines and Vaccinations (Who Had Their Finger on the Magic of Life ; https://medcraveonline.com/IJVV/IJVV-02-00047) . He is the author of over 100 published peer-reviewed articles (Published now in Herbal Nutrition Medications 1988) and author and co-author of many books including: Herbal Nutritional Medications (1988), One Sickness, One Disease, One Treatment (1992), Sick and Tired (Woodland Publishing, 1995), Back to the House of Health (Woodland Publishing, 1999), The pH Miracle (Warner Books, 2002), The pH Miracle for Diabetes (Warner Books, 2003), Back to the House of Health 2 (Woodland Books, 2003) , The pH Miracle for Weight Loss (Warner Books, 2004), The pH Miracle: Revised and Updated (Warner Books, 2010), Reverse Cancer Now (Hikari Omni Publishing, 2014), The pH Miracle for Cancer (Hikari Omni Publishing, 2015) and The Cancer Solution (Hikari Omni Publishing, 2018).

The pH Miracle series of books have sold over 10 million copies, have been translated into 29 languages and are gaining a widespread following internationally in over 159 countries.

In addition, Dr. Young has been honored with an invitation to sit on the Vegetarian and Fasting Committee for NASA’s earth and space missions. He also worked with a team of research scientists at the University of Puerto Rico, as well as the Center of Diabetes in Puerto Rico, on a potential natural cure for Type I and Type II diabetes.

Before Dr. Young began his extensive nutritional research, his love for sports and science led him to the University of Utah—where he studied biology and business in the early 70’s. There he was granted a full athletic scholarship for tennis. His team was consistently one of the top 10 in the nation. He had the experience of competing with the likes of Stan Smith, Jimmy Connors, and Roscoe Tanner.

In the 80’s, following his schooling at the University of Utah, Dr. Young studied medical microbiology—training under Dr. Robert Bradford at the Bradford Research Institute in Chula Vista, California. Dr. Bradford was a trustee and professor at Capital University in Washington, DC, where he taught live and dry blood microscopy. Dr. Young also studied darkfield microscopy in Essen, Germany under his teaching Professor Dr. Maria Bleker—who was the prodigy of the great late biologist, Dr. Gunther Enderlein—in Essen, Germany.

In 1993, Dr. Young received a MS in nutrition from the American College in Birmingham, Alabama. In 1995, he received his D.Sc. with emphasis in chemistry and biology. Dr. Young’s doctoral dissertation was on Disseminated Intravascular Blood Coagulation and Pathological Blood Coagulation. In 1997, Dr. Young received a Ph.D. from Clayton College of Natural Health. His Professor, James E. Harvey from San Diego State University, reviewed and accepted his dissertation as completing all the requirements for a doctorate of philosophy degree in nutrition. Continuing his studies and research, Dr. Young later received an additional doctorate degree in naturopathy (ND) from Clayton College (1999).

Dr. Young is a member of the Farm Bureau (Membership number C118341) as well as a recognized certified Avocado grower by the California Avocado Commission.

Dr. Young is a member of the American Society of Microbiologists, the Microscopy Society of America, the American Naturopathic Association, an honorary member of the Connecticut Holistic Health Association, the Presidents Council at Brigham Young University, a consultant for InnerLight, Inc.,  pH Miracle, Inc., organizing committee member for the Conference on Bacterial, Viral and Infectious Diseases in Dubai, UAE, and an advisor to Dean Lawrence Carter at the Martin Luther King Chapel at Morehouse College. He was honored by Professor Lawrence Carter at Morehouse College and inducted into the collegium of scholars as well as placed on the advisory board.

Professor Carter made this statement about Dr. Young’s work: “With over 52 books on the market, Dr. Robert O. Young has established himself as the preeminent scientific researcher on how to balance the body chemistry and achieve one’s ideal weight. Every African American and African Caribbean, every person suffering from type I and type II diabetes, hypertension, cancer, AIDS, heart disease and youth obesity, and every person reared on ‘soul food’ needs to discover The pH Miracle and the rejuvenating recipes that alkalize and energize an over acidified diet.”

“I have made this revolutionary dietary paradigm shift an official part of my professional ministry because it eliminated my acid reflux without prescriptions and reduced my weight by 50 pounds in less than two months. This reduction in weight greatly speeded reduction of my PSA level after seeds-implant treatment for low-grade prostate cancer. Dr. Young’s nonviolent peace diet is the natural scientific solution for a healthy body that is free from the warring of excess acidity. With Dr. Young’s new biology and nutrition program, pastors and congregations will rediscover the miraculous link between nutrition, health and spirituality.” —The Reverend Dean Lawrence Edward Carter Sr., Ph.D.; Martin Luther King Jr. International Chapel; Gandhi Institute for Reconciliation; Founder, Gandhi, King, Ikeda Legacy of Building Peace Exhibition; Morehouse College, Atlanta, Georgia.

Dr Young has been the keynote speaker at medical and health gatherings all over the world and appeared as a guest on many national radio and television shows. In 2002, he and his wife appeared on CBS’s The Early Show with Jane Clayson and Bryant Gumbel. (https://www.youtube.com/watch?v=8P4iBpmjIeo) In addition, Dr. Young has also been interviewed by CNN Nightly News, (https://www.youtube.com/watch?v=T0nwZPqbCbo&t=4s), CBS News and ABC News. In 2018, he was the Key Note speaker at the 3rd International Conference on Liver Disease and Pancreatic Cancer in Rome, Italy and the Key Note speaker at the Annual Conference on Bacterial, Viral and Infectious Disease in Dubai, UEA.  Some of his most notable accomplishments include: developer of a new theoretical paradigm called the New Biology Theory; pioneer in the research of a biological process called Pleomorphism; and the discoverer of the etiology of diabetes, cancer, atherosclerosis, and many other diseases. Dr. Young’s work has been featured on the Oprah Winfrey Show. Dr. Oz and several documentaries including “Crazy Sexy Cancer”, (https://www.youtube.com/watch?v=4Bmmxz5rGNY&t=3487s) and “The Secret”.

Dr. Robert Young has devoted his career to the discovery of the missing pieces necessary to complete the larger picture of health.

I am also providing you with a free link to my peer-reviewed research on cancer  – “The Alkalizing Nutritional Therapy in the Prevention and Reversal of Any Cancerous Condition” – https://medcraveonline.com/IJCAM/alkalizing-nutritional-therapy-in-the-prevention-and-reversal-of-any-cancerous-condition.html You can find additional books and papers on my research at: https://phmiracleproducts.com/collections/books-audio-video

https://crazzfiles.com/wp-content/uploads/2022/08/dr-robert-young.mp3Podcast: Play in new window | DownloadSubscribe: Apple Podcasts | Android | Email | RSS Researcher and author Sharon Daphna jumps back onto the podcast with me today 28/09/22 to discuss her latest gifting work in the US and to cover the latest worldwide weather events. On today’s podcast show, we continue to break down[…]